The whole first section has absolutely nothing to do with twins so forgive the mommy and daddy focus. Jump down below for the baby specific stuff...

The birthday week is in full effect -
Kendra's birthday week is moving along even better than I hoped. On Saturday night she went out for a night on the town with some girlfriends. Since it was "girls only" and there were no pictures, I have to take her word for how much fun she had with them. When she left the house all dressed up, made up, and painted (fingers and toes) I was jealous about missing the chance to be out with her like that. However, the whole point of the night was to have dinner and chat like a bunch of hens in a hen house and then dance the night away. They successfully did both and I was more than happy to stay at home with the babies. I hope she brought home some new dance moves so Easton and Layla can get beyond the minimal bobbing up and down at the knees... Good grief, they look like me when they do that white guy dance.

Stage fright and staged fight -
On Sunday I participated in a UFC / MMA fight demo in front of our whole church during Sunday service. It'll be on video on our church's website by the end of the week so i'll certainly post the link when it is available. My lead instructor and I fought for a few minutes. When I say, "fought" what I really mean is I was a human piñata. He flung me around the stage like a rag doll and let me tell you, it was real! I still can't fully close my jaw because he kicked me in the face so hard. I didn't plunge into martial arts expecting a knitting class though, you know? The fighting was very controlled and the scary part is he only hit me with less than half of the power he has. All kidding aside, it went really well and I was proud of myself for going through with it.

another 30th birthday -
Kendra made some very cool friends at the library during the weekly story time for babies. One of them, Angela, had her 30th birthday last weekend just like Kendra so we went to her house for a surprise party. Here are the birthday girls: 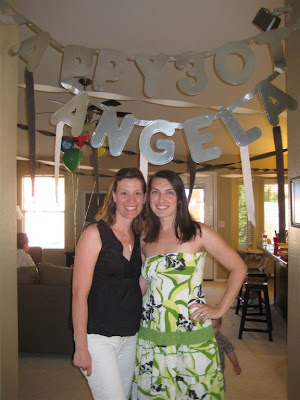 Everyone at the party was friendly and we were able to meet several new acquaintances. I tried my best to make friends with Angela's daughter, Emily, but she's a little shy. :) 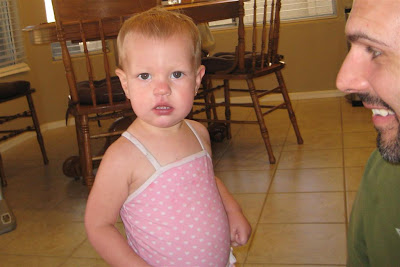 Easton did a better job than I by befriending Dylan. They bonded by playing at the baby karaoke stand complete with lights, music, and a microphone! 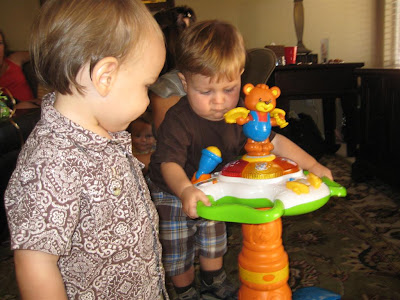 Costco fruit -
After a long day of getting beat up in church and having fun at the birthday party we managed to get in a trip to Costco to pick up a few things. On the top of the list was a crate of blueberries for the twins. They absolutely go bonkers over blueberries and ask for them by name. As soon as Kendra brings them over to the shopping cart, Easton and Layla immediately start talking and signing. "more!", "please?", "blueberry?", jump down, turn around, pick a bail of cotton. They were doing every sign and word they know trying to convince Kendra to unlock the magic box of blueberries. She did so right there in the store as they hoped. Unfortunately, just after this picture Layla turned INTO a blueberry just like Violet Beauregarde in Willie Wonka and the Chocolate Factory... 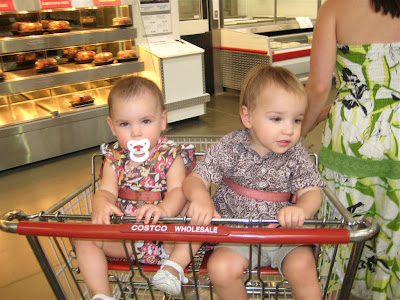 Easton and Layla started a new stage of imitation yesterday. Supposedly that is the most sincere form of flattery, but I have to disagree. I woke up in my normal allergy induced congested state. I walked in to greet the twins with my normal, "Hiiiiiii baaaaabies!" Then I let out an uncontrollable loud sneeze. Layla and Easton BOTH thought about it for a moment and then did a fake, "achoooooo" sneeze followed by giggles. Not once, but for the next 3 minutes all I heard was Easton and Layla alternating, "achoo, huh huh huh... achoo, ha ha ha". I know to be careful of what I say and how I act around the babies, but this kind of mimicking sure is starting much earlier than I expected.

Hi Bronson, check out my blog, I just tagged you!!!

Kendra - glad you had a super fun girls night out! And you look so pretty in the pic from Angela's surprise party ... thank goodness for the double sided cart at Costco, right? Happy b'day again ... Bronson - your skit was great & glad I got to see that before being relegated to the Mother's Room! :-)