Part of the fun in parenting is figuring it out as you go. The same thing happens when single people get married. Those who are changing from single to married or from married to married-with-children go through the same experience. Hearing others talk about what life will be like, but in no way comprehending the realities (both positive and negative) of the next stage in life. I feel very fortunate to have Kendra who spent much of her younger years as an older sister, babysitter, nanny, and day care worker. The experience carries over well to being a parent. However, I can count on one hand the number of times I held a baby before having my own.

That being said, I'll throw out a tip based on what I learned last night. Once Easton and Layla became active I found it difficult to know when they should go to bed. Kendra made it easy on me (and the babies) by mandating 7:00 PM as the magical bed time. For almost a year we've put the babies in their crib at exactly 7:00. I do well with absolutes so it was easy for me to lock that time in my brain and build our evening around bed time.

Earlier this week Kendra said we need to let the twins stay up a little later so they will keep 7:00 AM as their wake up time instead of gradually moving towards a 6:30 AM wake up. Last night we did the normal routine and then let them continue to play with toys while running around like a couple of Indians on a war path. Then it happened. At about 7:15 they just ran out of gas. They both slowed down to walking and then crawling and then sitting like this: 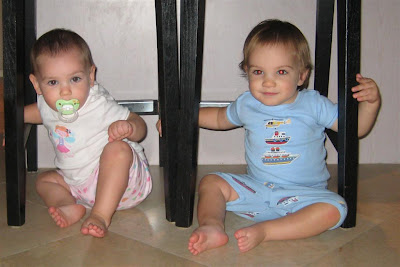 Then struggling mightily to stay vertical 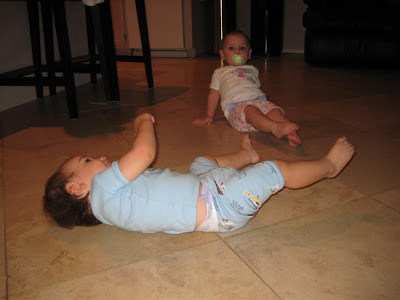 Then to laying down without any chatter between them 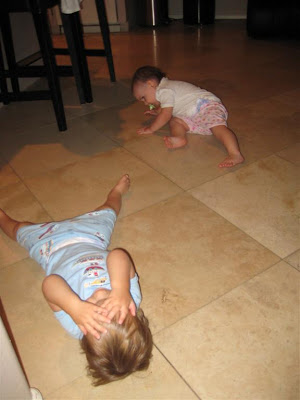 And finally flat-out stillness on their backs against the cold travertine tile floor. 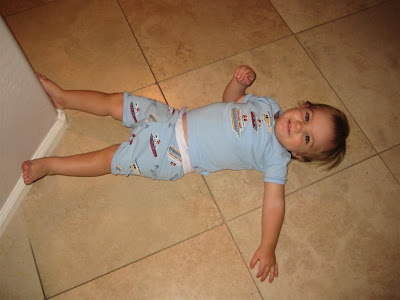 The whole sequence took only a couple of minutes. That's when I figured it out! There is a moment during the evening when you could swear someone shot them with a tranquilizer dart. It happens JUST like what you see on Animal Planet where out of control monkeys get tagged with a dart and slowly lay motionless on the ground. From now on I'll just wait until they get past the play stage to the sitting stage and then shuffle them off to bed just in time to wind down into a deep sleep.

One other topic I'll cover is how Daddy feels about the U.S.A. I never want my twins to wonder where I stand on the issue of patriotism. I read in the news last week about a woman in Texas who was told to take down an American flag at work because it "offended some people". The next day I purchased the biggest flag I could fit against my office cube wall and now it looks like this: 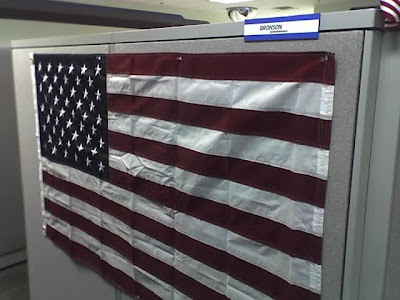 I am overtly and unabashedly patriotic. Some things in life are worth fighting for and the right to be patriotic is one of them. Several coworkers and people who sit close by have commented positively about my oversized flag. I told them, "If I had a bigger wall, I would have purchased a bigger flag!" God bless America. I hope that clarifies what Daddy believes as far as patriotism is concerned.

Happy weekend to you all!
Posted by The Four Webbs at 8:38 PM