Everyone has heard the old childhood song, "If you're happy and you know it", right? The song is gaining in popularity around the 4 Webb's house since Easton and Layla are interactive. It wasn't nearly this fun when they were just 6 month old, motionless bundles of love. Layla has the most energetic, “Hooray!” I’ve heard in a long time.

After church we went to the Pecos Park Splash Pad, which is a public park with shades over the jungle gym and a place for the twins to cool off in the spray. Here’s a picture I found from the internet of the exact area I’m talking about. 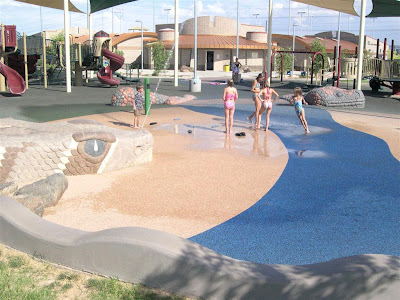 Easton smiled and snorted as he ran around on the splash pad. He chased the water as it randomly appeared and disappeared from the various spouts. I, in turn, chased him around and did my best to avoid getting soaked. He eventually got really tired because his water-logged diaper must have weighed 5 pounds by itself. Layla was only interested in going up the steps and down the slide over and over again. I couldn’t believe how she went down all by herself with no one at the bottom to catch her. She plopped her feet right on the ground in front of the slide and kept on running without any pause in her forward motion.

The title of this next picture is: “Can I have your cookie also?” 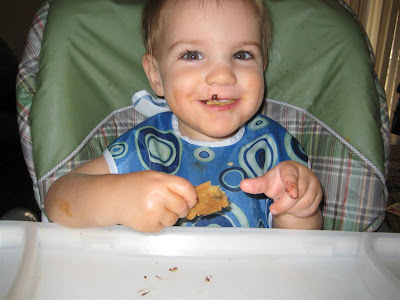 I’m certain Easton was thinking that as he pointed at my cookie. He really digs Mommy’s homemade chocolate chip cookies (as if you couldn’t tell by this picture).

One other funny fact about Easton is this: For unknown reason's he asks us to cram the stuffed animal cow or horse up his shirt. He wanders around the house all day some times with the stuffed animal there. Occasionally he'll squeeze the noise maker inside the stuffed animal and we hear a random, "moooOOOOO, moooOOOO!" Here you can see the horse sticking out of the bottom of his shirt. 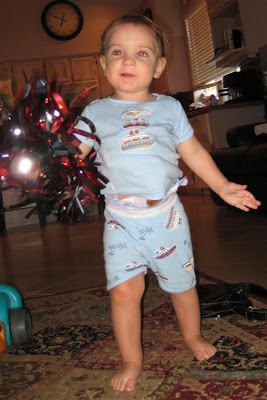 Maybe some day he'll be able to verbalize the obsession with stuffed animals in his shirt, but until then we gladly go along with his requests. He's just being himself and figuring out what that really means. Ditto for the pom-pom he's shaking.

Have a great workweek and stop by again soon!
Posted by The Four Webbs at 7:41 PM