Kendra's flight was scheduled to arrive late last night, but delayed by an hour more due to who-knows-what problems with the airlines. On my way to pick her up at the airport, which I've been to dozens of times, I missed my exit and drove around downtown Sacramento. Eventually I found the entrance to the highway and my way to the airport. Then I drove around looking for Kendra on the curb. That didn't work out so well as I circled around and called her cell phone over and over. I resorted to parking my car and wandering through the airport searching for her. After resisting the urge to involve the police officer who was standing on the corner, I walked around again by the curb and there was Kendra sitting, waiting, and smiling. I was really scared and worried something happened to her, but she just didn't hear her phone ring and didn't see me drive by.

Needless to say, my response to her was not one of my finer moments of showing compassion and grace. I plan to issue a full apology tonight and a retraction of anything I said that I shouldn't have. :(

Anyway, here's the rest of what happened over the past few days. For some reason I ended up with a ton of good pictures of Easton and not much of Layla. that's the way it goes sometimes.... We hung out with GG and uncle Casey at GG's house to escape the heat and give the twins some new surroundings. GG gave them ice cream and that was a big hit. Uncle Casey was kind enough to spoon it up for Layla. 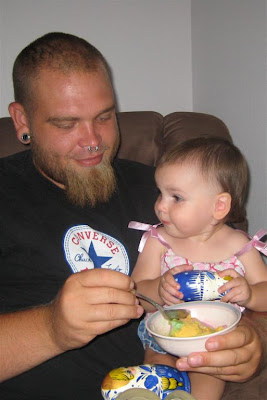 Here is Easton saying "please" to get ice cream from GG. He does the sign language version by rubbing his chest and says, "peace! peace! peace!" I find it almost impossible to resist his request when he has such cute manners. 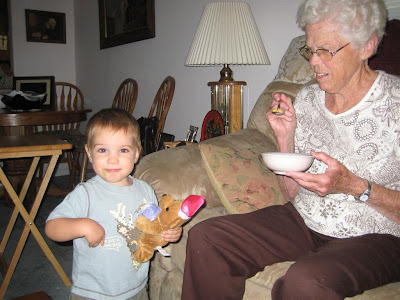 We went outside for a few minutes to play in GG's backyard, but it was too hot for us to stay long. As the twins played ring-around-the-bush I took a picture of them together from behind. You can see Easton's hair is long and thick in the back. His hair is lightening up more every day with blondish tones. I guess that's what being in the California sun does... Layla's hair is finally growing in and you can see her funny little tail of hair growing on the left side of the back of her head. That one little strand of hair is outpacing the rest of her hair for some reason. 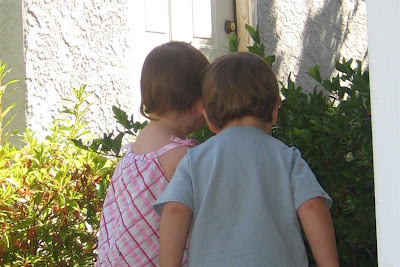 Easton sure knows how to relax. He's swinging in the back porch swing with GG while sitting up like a big boy. Layla was too busy running around the bush to be bothered with resting in the afternoon shade. 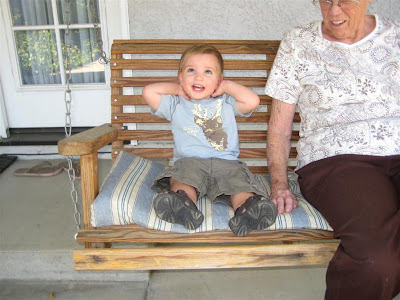 After my Mr. Mom experience I could change Easton's name to "Don't Touch That". I said the phrase hundreds of times... He probably thinks that is his name already. No matter what safety devices are installed or how cautious a home owner is there will always be a few things at eye-level for the babies which they should not touch.

Another thing we learned is that Babies R' Us is a good way to wear out the twins AND get cheap clothes. I discovered that plain white socks with no rubberized words on the bottom are impossible to find. I had to choose from knit black socks, frilly green socks, long brown socks, but not a single pair of plain white ones could be found. Oh well, at least they had semi-normal pink and blue ones which worked for me. :) Easton was truckin' around the halls touching everything in site. 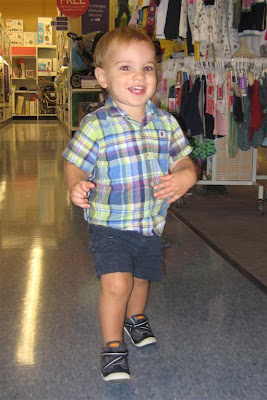 Layla was concentrating on running and screaming while keeping her pacifier firmly in place. That's quite a feat... 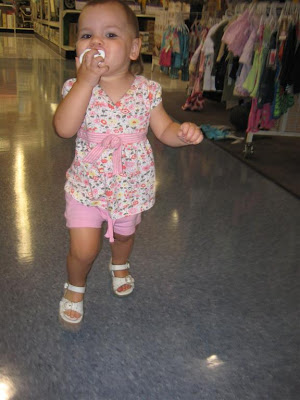 Opa and I did our best to keep recycling the toys to keep them fresh, but at one point we resorted to putting the armband floaters on their legs. The twins burned at least 10 minutes running around like this: 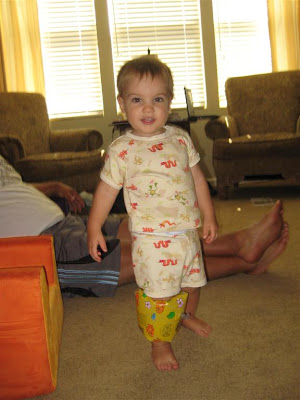 Then we moved on to kendra's swim goggles. They laughed and thought they were sooooo cool with the goggles. These will be printed off for Oma and Opa's house... 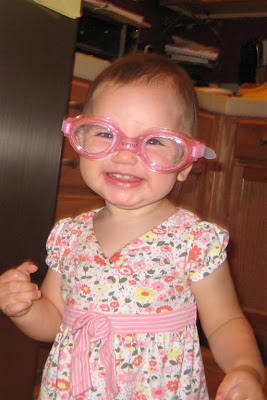 Are these the happiest babies, I mean toddlers, you've ever seen or what? 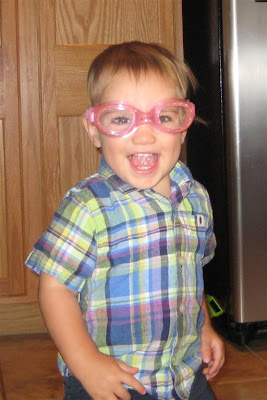 Oma comes home tonight and we are ALL excited to get back to normal, whatever that is. I'll never forget the time Opa and I spent taking care of Easton and Layla all by our lonesome. From what people tell me it gets easier when the twins get to the point where they don't need constant supervision. However, their full and complete dependence on us was a special time to pour into their lives and spend some excellent quality time.

Great pics on this one! You'll have to zoom in, crop, and frame that one of Easton on the porch swing!

Have a good one.