The 4 Webbs have overtaken Kendra's parent's house. The notable changes are shoes left out overnight, toys littering the entire first floor, and a trashcan filled with smoldering, stinky diapers. On the other hand, every morning Oma and Opa wake up hearing their names called from the twins down the hall and then all day long. Also, if Oma leaves the room, Easton furrows his brow and sometimes sheds a few tears until she comes back into the room. That's gotta count for something, right? At least Layla is doing her best to clean up after herself 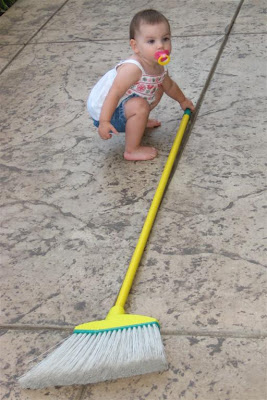 Yesterday Easton was driving us crazy 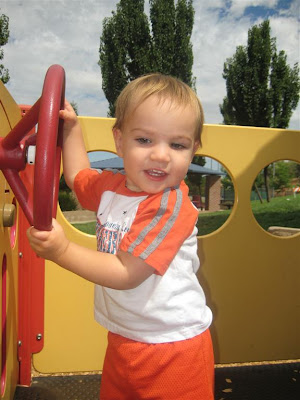 Just kidding... Easton was well behaved as always. That just made for a good pun in the caption. Whenever Easton sees an airplane, he says the word "airplane", but then he says, "bye bye!" in his extra sweet voice because the airplane is usually quickly flying away from us. He finally found an airplane where he didn't have to say, "bye bye!". 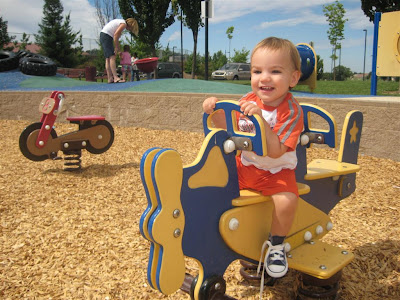 On Sunday Kendra's family had a huge gathering with cousins and aunts and uncles. We had a mini-church service and then spent the rest of the day eating and swimming... and I mean the rest of the day. The BBQ was fired up and we made the most of it. Forget the idea of waiting 30 minutes between eating and swimming! Layla was covered in sunscreen with a hat and swimming gear so she didn't even get a little tan. We were all water logged with pruny hands, but had an excellent time with everyone. 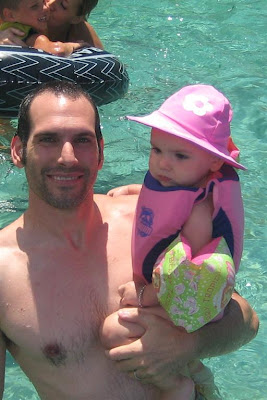 Kendra and I were bad, bad examples and didn't put on sunscreen so we are scorched like lobsters. Who would have thought us Arizonian would travel to California and get sun burned? Anyway, Layla and Easton had an excellent time hanging with their cousins. Here's Layla with Alannah. She was somewhat unimpressed with the walrus blow-up raft because it didn't go fast enough! 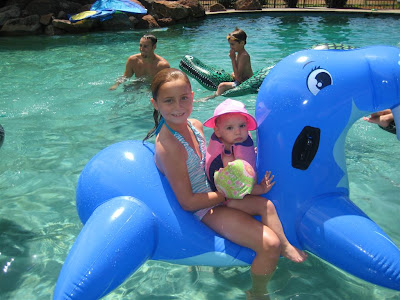 Easton was more interested in cuddling with GG and the uncles. 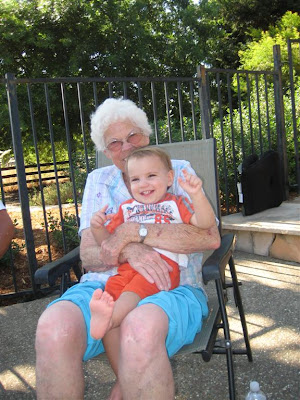 The twins joined in the food-fest by eating and drinking everything we did including ice cream, chicken, and potato chips. Easton is mid bite as he sits comfortably in Aunt Judy's lap. 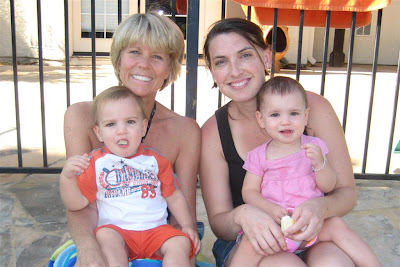 Easton calls here "Juju", which is close enough! We also caught a cute moment where Easton and Layla pulled off a double synchronized "cute face". It's tough enough to capture their cute face (when they tilt their head to the side and smile real big), but we got the Double Cute face! 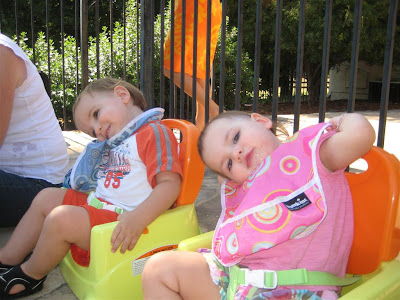 Layla took a digger over the top of the slide (see previous post for pictures of the slide), but she appears to be doing great with no ill effects. She cried a little, but i think that was from the feeling of falling in conjunction with the tuck and roll at the end. She was attacking the slide again within minutes... What a trooper.

Please keep me and Opa in your prayers as we send off Kendra and Oma out of state for 5 days. They will be relaxing and laughing in unison along with her female cousins and aunts. Opa and I will be like Michael Keaton playing Mr. Mom in the old school comedy. 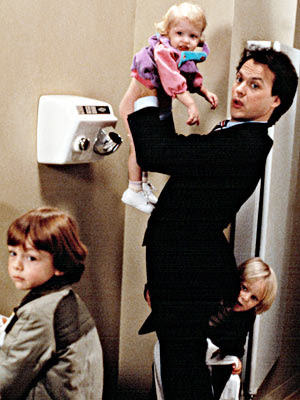 Luckily we will still be playing a one-on-one defense against the twins because there are two of us!