I decided to wait until after the Super bowl before posting so I could know whether to gloat and cheer or merely shrug my shoulders and mumble something about how we aren't worried because there is always next year. Now that we know the Cardinals blew it, we can simply move on to more interesting topics without wasting any more space. All I can say is a quote from Ricky Bobby, "If you ain't first, you're last!"

Anyway, we watched the first half of the game at our friend's house, Scott and Marisue. They were kind enough to invite us over to hang out with them and their extended family. Lots of laughing at kids as they played in front of us and some yummy cupcakes with frosting so good I can still taste it. mmmmm, cupcakes.

Speaking of tasty... Easton and Layla were given a high-chair-full of avacado pieces and they mashed it all over the place resulting in two green, messy babies. 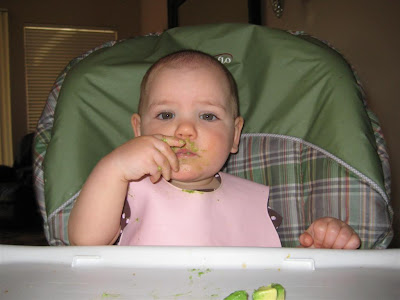 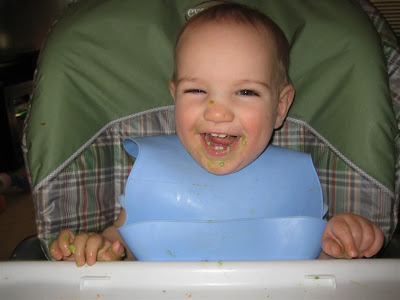 The humorous part is we will give them avacado again and repeat the messiness because even though it's a hassle to clean, they thoroughly enjoy eating it.

Yesterday morning Easton woke up extra early, but I was up since 4 AM so it wasn't a big deal. It was actually tons of fun for us to hang out as "just the guys" while Kendra and Layla slept in. We shared a bowl of oatmeal and watched the sun come up through the back window. I actually shared my oatmeal... as in, one bowl and one spoon for us two boys. That may not sound very extraordinary, but for someone like me who doesn't like baby slobber or any other bodily fluids for that matter, it was huge. I reached the point to where eating from the same spoon is not a big deal. He spent the better part of the day playing with the lid from my Gatorade. He continually had to decide between sucking his thumb and chewing on the lid, which made for some humorous moments. 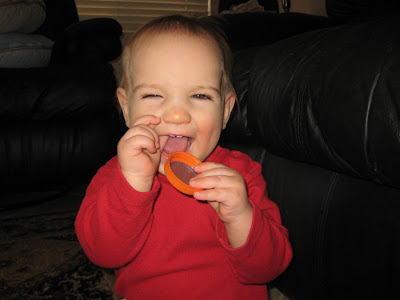 I could see his brain working as he tried several times to figure out a way to suck his thumb AND chew on the lid simultaneously. Also during this time a house fly buzzed around landing on Easton and flying over his head. Every time the fly would buzz by or land on his head I made the "Bzzzzzt" noise. He laughed harder and louder than I've ever heard. Even hours later when I made the noise he'd chuckle a little. I just love how simple things make a child's day.

Layla is still pushing Easton around on the walker and she doesn't know to stop when Easton has had enough. That's what mom and dad are around for... refereeing. 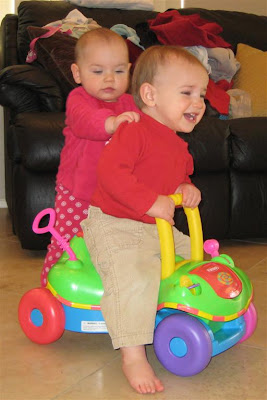 Kendra is teaching the concept of "on" and "off" and this picture of Layla is just too good to pass up from today's fun learning time. 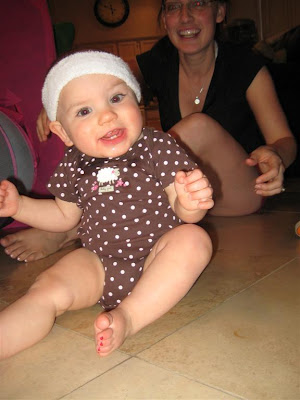 As much as I wish we could just play all weekend long, I had a Honey-Do list longer than my arm so I started with the most pressing thing first: child proofing the cabinets! Here's Layla testing out Daddy's handy work within minutes of installing the hooks to keep the doors closed. 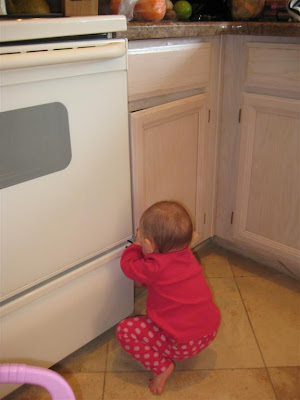 The score is: Daddy 1, Layla 0. goooOOOOO team! She eventually made her way around to every single door... such a clever little girl. You may not be able to tell, but here's a picture of Layla with her pretty painted toenails. I didn't know mommy was going to paint them, but I like it. Especially since she doesn't have long hair to show her girly nature. :) 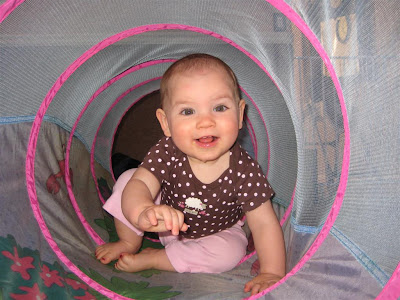 As for the continued progress of my One Month To Live challenge, I'd give myself a C+ for effort so far. My sister saw Jason Mraz on SNL and emailed me a note about his song titled, "I'm Yours" and how it shows in song what I've been trying to portray in words regarding how to live as if I only had one month to live. It has a long intro, so just bear with it a few seconds while it gets to the words... I found a version with lyrics for the hard-of-hearing (ahem... mom) who complained about the last music video I posted saying it was hard to hear his words. :)

My parents and Kendra's parents will be here with us in 5 days to celebrate Easton and Layla's first birthday! we've all been counting down the days for so long that it almost seems weird to actually be here. I can't believe our babies are almost 1 year old already. I'm 50% happy because I know they are growing up so well and I'm 50% sad because I realize having our little babies will never happen again. Not that either of us expect more children, but it's just a sobering realization that this stage (and every stage for that matter) only happens once and that's it.

I am certain no one on their death bed has ever said, "I wish I'd closed one more deal" or "helped one more patient" or "fixed one more problem". Work is just work. However, the most common thought that goes through people's mind is probably the regret of not spending more time with the ones they love.

Have an awesome week and good luck identifying what is really important in life as I'm seeking the same answers.
Posted by The Four Webbs at 11:21 PM

Sharing oatmeal with the same spoon and laughing together gets you an "A", not a C+.
Your sis--a teacher who grades on a curve.

Question: How do you raise your kids differently if you have a 30 day mentality? What do you teach them about life to balance their perspective?
joanie