Thanks for stopping by to see more of the 4 Webb's antics. We finally leveled out today back to "normal status". By normal I mean the house only has us four Webbs with no more grandparents (boo hoo) and my cough/fever/achy sickness from the past few days is finally gone. Just in time to go back to work tomorrow...

Easton and Layla are having a great time playing with the new birthday gifts. Believe it or not, I am also happy they have new toys because even daddy gets tired of hearing the same old songs and noises repeated over and over for the past few months. It's nice to hear some new beeps, bells, and melodies once in a while. :) The twins really dig sitting in their rocking chairs and now we let them sit there while watching their "Your baby can read" videos each day. Most of the time they are smiling and chuckle once in a while, but this next picture shows their zombie look from being overly tired while watching the video. 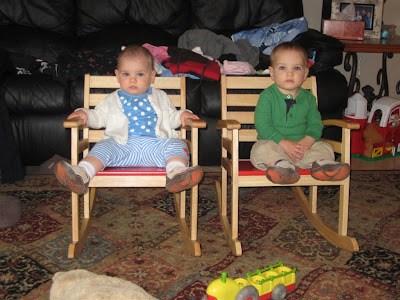 They still look cute though even as zombies. Speaking of the "Your baby can read" videos, Layla points to her head, her belly, and her nose on command. She also sticks out her tongue when we ask, "where is your tongue?" I suppose that's proof she is learning something, but as I said in the previous post it is slow going as expected.

I haven't had the chance to post the humor from visiting Judi's house (Kendra's mentor). We took the twins over expecting they would go to sleep at 7 in the portable cribs we set up. However, they were so wired because of the new place and new people they stayed awake until past 8! While they distracted the group discussion, Layla decided to make friends with Judi's oversized stuffed animal dog. She buried her entire face in the middle of the dog and did some WWF moves on it, but finally settled down by chewing on its ear. 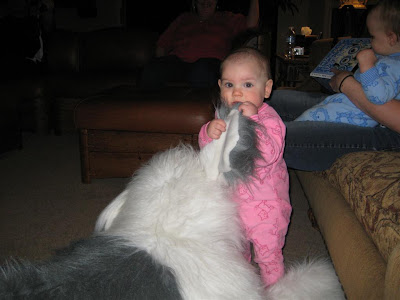 Sometimes I take a quick picture of little Peanut and I just for the fun of it. Wow, I really need to shave, huh. I'm starting to look like a homeless bum. At least Layla looks adorable as always. 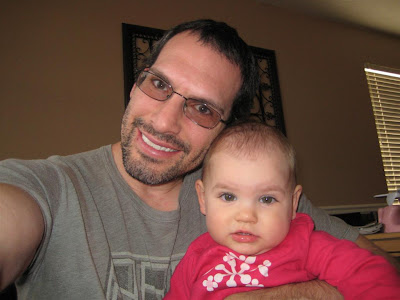 One other picture I haven't had the chance to comment on is this one of Ben and Trinity, the twins of our friends who we hand out with regularly. 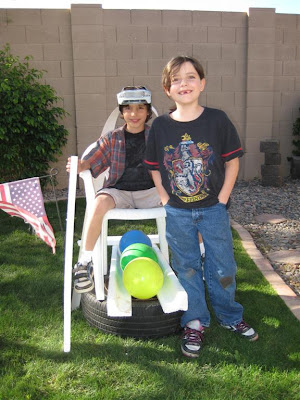 I can't explain exactly what that contraption is though. All I know is they took all the broken, useless junk from the side yard of our house and creatively built that cool looking chair-thingy. It could be a water craft of some sort, but I'm not willing to give it a test run!

One other picture I've been waiting to post is this one of Papa and I at the shooting range. 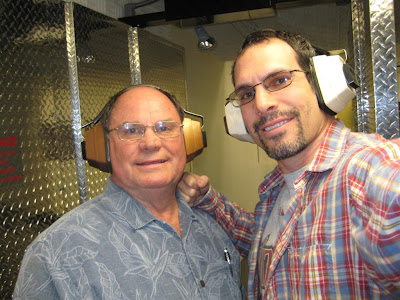 I believe relationships are built on experiences and you can't have experiences unless you do some adventuring. Dad teaching me the basics of how to fire a pistol at a shooting range is one of those moments I'll remember forever. We shared some great conversations and time alone. Also, Kendra was able to see a little more why I am the way I am by having Dad around the house. It's difficult to have those revelations about a person over the phone so I'm grateful they were able to travel and stay with us.