Easton and Layla are keeping us busier than ever with their increased mobility and never ending supply of energy. The tables have finally turned and now the two of them chase ME around the island in the kitchen. It's a simple game called, "get daddy". Easton pushes his walker around, sliding into every corner like a sprint car on a dirt track and Layla wobbles around unassisted. The problem is when they catch me, neither one have any clue what to do. They just freeze and give me the deer-in-headlights look until I start running around again and the fun resumes. Here's a video clip of Kendra chasing the twins around the island to give you an idea of how it works.

I finished our taxes today. Apparently the government doesn't realize how much it costs to take care of babies otherwise my deductions would have been much larger. We went from DINK (dual income, no kids) to one income and two kids! I thought the government would hook me up, but oh well. In honor of this big milestone of completed taxes I'll repost the infamous tax deduction picture (notice their outfits) from months ago. It's hard to believe that is Easton and Layla at 10 weeks old. They look so plump and tiny. 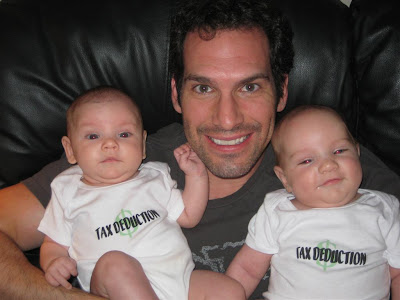 Bath time is always the best opportunity to capture the biggest smiles of the day and I really like how handsome and happy Easton looks in this picture. 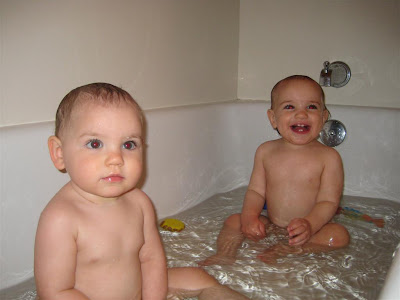 And while I'm at it, here's a video clip of the twins giggling at Mommy as she makes funny pop noises while they sit in the tub.

The twins don't allow many moments of cuddle time during the day, but just before bedtime when we read books is one of the consistent windows where I take all the cuddling I can get from them. Layla isn't sleeping here; it's just the timing of the flash and her long, slow blinks from being so tired. 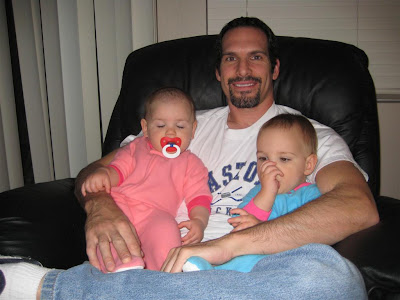 The twins are really excited about books we received as birthday gifts so thank you Tam and Joanie! I went shopping yesterday alone with Easton on a mission to find new pajamas. This is another one of those no-brainers in design that I felt like I was asking for a tailor-made suit for Governor Arnold Schwarzenegger.

My request was simple, or so I thought:
thick, soft material to keep them warm
fit 12 month old babies
single zip up from the foot to top
long sleeves
no hood (to avoid possible suffocation)
covered feet padding on the bottom of the feet for traction
and a partridge in a pear tree

After sending the Babies 'R Us lady to the stock room to find the needle in the hay stack... Tada! a miracle happened. Not only did she find what I wanted, but they had a TWO pack with one pink and one blue and it was on sale at 70% off! It was as if the sky opened and God himself shined down on me and said, "I will give you the desires of your heart". I almost drove straight to Vegas and bet an obscene amount of cash on lucky number 7. Just kidding... I never bet on odd numbers. Anyway, here they are in the new pajamas. 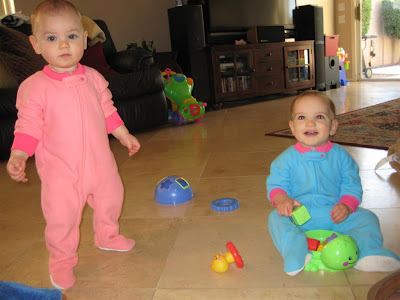 All I need for this next picture is a Right Said Fred intro with, "I'm a model you know what I mean. And I do my little turn on the catwalk" 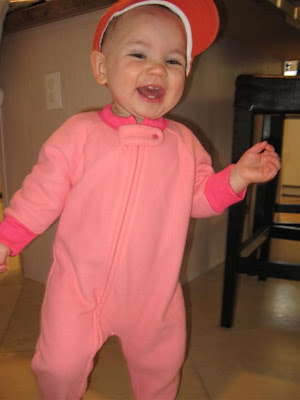 If you don't know who Right Said Fred is, then the last line won't make much sense, but hopefully it's funny to those who get it. I'd prefer Easton's pajamas to have a different color than pink for his collar and cuffs, but now I'm just looking a gift horse in the mouth. Oh well, at least it matches the pink dolly stroller as he pushes it around. 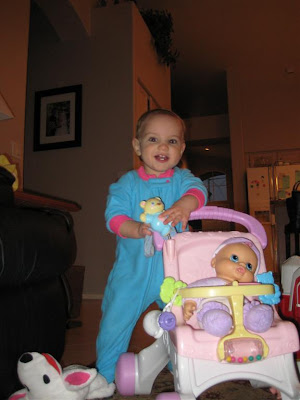 As I was leaving our bedroom after saying good night to Kendra, she was reading the Bible and thought I would find it "uplifting" to hear this verse: Gray hair is a crown of glory. It is attained by a life of righteousness. Proverbs 16:31 Yes, I have grey hair (since I was 16), but I don't feel like I completely live a life of righteousness. I'm certain this verse is somewhat conditional because Bernie Madoff is neither righteous nor in possession of a crown of glory. 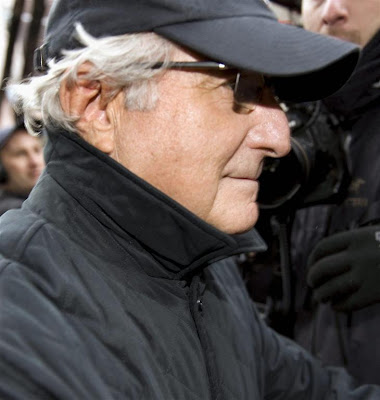 That has absolutely nothing to do with the twins, but it was sweet of Kendra to speak words of life over me and show she likes my grey hair. I just thought it was humorous Bernie Madoff was the first thing to come to mind. I should probably stop watching MSNBC so much.

Have a happy Thursday!
Posted by The Four Webbs at 9:09 PM

Don't worry, I got your Right Said Fred reference. ;)

Can't use the word "sexy" to describe your sweet little baby? HA! Now, the gray hair is starting to show the wisdom....You've got a great wife to speak God's words into your life to build you up..love those cute jeans she's wearing, too. Now, that's the "right" Right Said Fred reference for you. joanie

Can't use the word "sexy" to describe your sweet little baby? HA! Now, the gray hair is starting to show the wisdom....You've got a great wife to speak God's words into your life to build you up..love those cute jeans she's wearing, too. Now, that's the "right" Right Said Fred reference for you. joanie

Hi from The Bacashihua Family!! I just recently started checking out your blog as I had heard about it through the grapevine. Just thought I would let you know about buying pj's - you have to buy them a season ahead of time. I too like the fleece, footed sleepers with zippers and I found some back in September/early October at Walmart in a 2 pack made by Gerber for under $10 - great price! Also, Sam's Club had some as well for a good price and they are made by Carter's. Now is the time to start looking for spring/summer pj's and you can find non footed cotton ones at Costco or you can get footed cotton ones at The Children's Place. Warning, Children's Place ones are long sleeve but you can just cut the sleeves and make them short sleeves. That's it for now! Say hi to Kendra for us! Liana