Welcome back to the latest edition of the 4 Webb's adventures!

My mom and dad are only in town until tomorrow so we are already in mourning for the week that passed by too quickly during their stay. Kendra's parents are already back to work and day dreaming of Layla's peg-leg walking and Easton's toothy grin. We I'll photo shop eyes on Kendra's mom since she blinked at the wrong instant, but for now we'll have to make do with this picture the way it is. 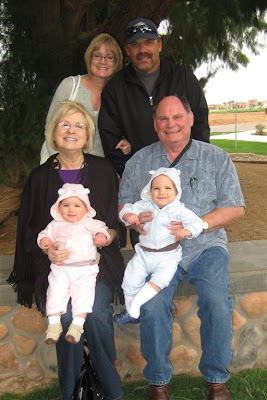 The reason I chose to create a blog focused on our twin babies instead of Kendra and I is because they are MUCH more interesting. they change and grow every single day. I do to, but who wants to see pictures of my boring day at work or the ever increasing number of grey hairs on my head. Anyway, Easton increased his vocabulary once again and oddly enough his words include:

I wonder where he picks this stuff up? 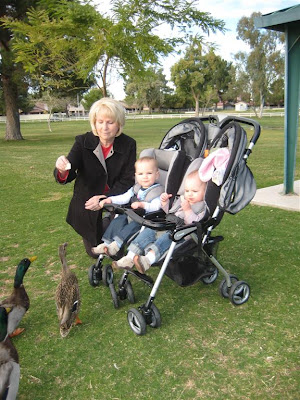 Oh, ok. Now I see. There is Nana feeding CRACKERS to the DUCKS in the sun LIGHT. How about that.

He also says "Hi", but that is rare and hard to distinguish between Hi and the other 100 babbling baby noises he makes. Cracker is easy to pick up though. When he's hungry he says, "kac-kuh" repeatedly until he gets one. He sure is a persistent little guy.

Easton also took his first steps yesterday! Once he figured out he was walking unassisted (after about 10 steps) he became a little afraid, but overall did a good job of accepting his new ability. Layla is starting to pick up speed and stability with her walking, which is evidenced by the high wear and tear showing on the bottom of her little shoes.

The twins are really starting to enjoy their rocking chairs. They can get up and down on their own and Layla rocks back and forth as though she's actually getting somewhere. 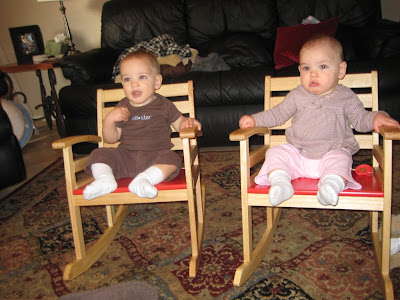 Easton discovered how much fun eating spaghetti is. We had to move from a wet paper towel to a soaked dishcloth because of the messy sauce everywhere. 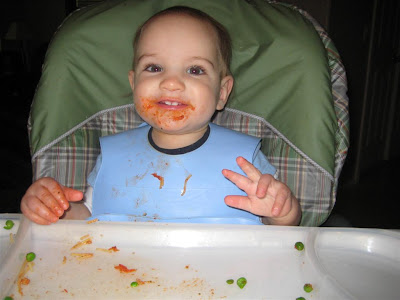 Just for fun I took a picture of the twins standing in front of Kendra being extra needy so you can see what it looks like from her point of view. 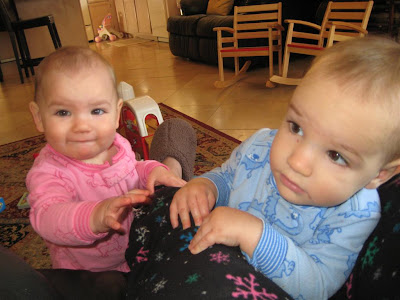 Both babies have sweet spirits and in general are happy, but the constant supervision and keeping them happy put a high demand on Kendra every day. I'd have to say one-year-olds are easier than six-month-olds, but then again, I'm just the dad. :)

No more nursing. Easton and Layla officially weaned themselves this week without much fanfare. yea for Kendra. Time to go for now... somebody wants a cracker and it ain't Polly.
Posted by The Four Webbs at 8:18 AM

Congratulations on your first steps Easton! Who knows where those two feet will take you, but I'm sure you'll enjoy the trip.