Us Arizonans are just as stunned as the rest of the country about actually participating in the Super bowl. What an opportunity to celebrate! The 4 Webbs are doing exactly what we would have done if the Cardinals weren't in the game... watch it at home while playing patty cake with the twins in between commercials. :)

Kendra's feeling a bit under the weather today so I hope she's sleeping well as I literally burn the midnight oil writing the blog tonight. She was teaching Easton and Layla the concept of on and off. As props she used some of my Richard Simmons style headbands and it looks like they were having a fun time. 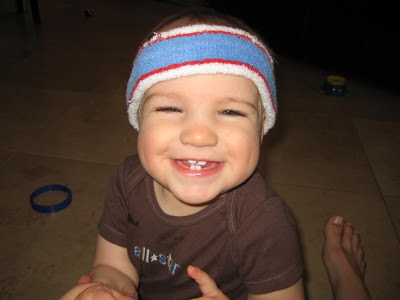 They both have the sweetest smiles and funny facial expressions. 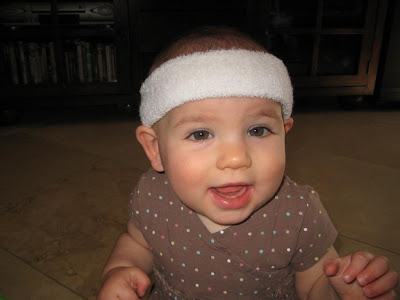 On a sad note... Kendra trimmed Easton's hair this morning and now I can't cheer on his mullet anymore. I know it was getting really long in the back, but I joked with Kendra he was like Sampson from the Bible and cutting his hair was forbidden.

Sometimes in the morning we let the twins watch a few minutes of some cheesy TV show with a duck, a turtle, and a rabbit who go on the same "mission" every single episode. Anyway, you can see them here with their zoned out look as they focus on the TV behind Kendra. The reason I wanted to get this picture was because all three of us were wearing brown shirts. That coincidence seemed much more humorous at the time, but here it is anyway. 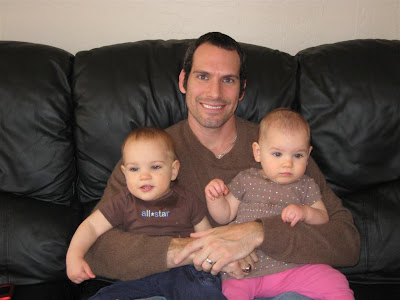 The twins can spend 15 minutes sometimes walking around the living room with their walkers. I'm so blessed to live less than 5 minutes from work. I listened to the traffic report during my short commute and felt bad for all the people backed up on one of the highways due to an accident. The irony was that after walking in the door after hearing about traffic jams, I gladly dealt with this minor fender bender. 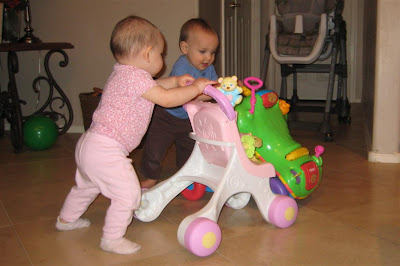 I transformed Easton's walker into a rider and Layla pushed him around as he proudly sat on top. You know the guy in the back of the bobsled team who does that running-push thing before hopping in for long ride down the ice? She was doing that to Easton all over the kitchen. 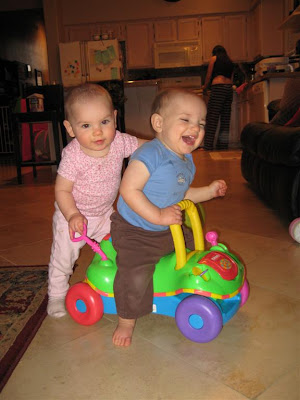 Seeing her push him around made us laugh so much that taking the picture was difficult to keep the camera steady.

Once things calmed down Easton was still proudly sitting on top of his rider and didn't mind Layla checking under the hood to see what was in the front compartment. Incidentally, there's nothing in there but a few bits of cracker, but they still enjoyed opening and closing the lid dozens of times. 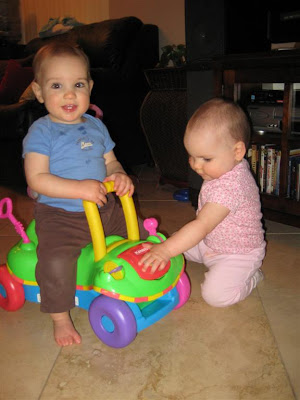 Anyway, time for bed so I can have a good Friday work day. At least I know the twins will be up bright and early to wake me up for work!