We've had a fun-filled past few days and it looks like the party is just getting started. No more work for me until a few days into the new year, so it's time for the 4 Webbs to do some serious hanging out. First we had to do a little more child proofing at Oma and Opa's house because everything off limits was on the top of their list. We plugged all of the electrical sockets and gated the stairs since the twins would head over to the stairs every few minutes and we' have to retrieve them back to the play area. Now they stand at the gate and shake it back and forth like prisoners. 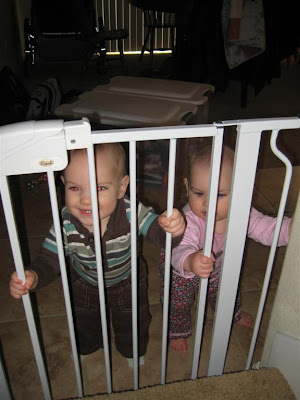 Bath time is always exciting and joyous. Nothing smells better than a freshly washed baby (or two). After strategically placing arms and hands, here's Kendra with Easton and Oma with Layla getting them ready for bed. 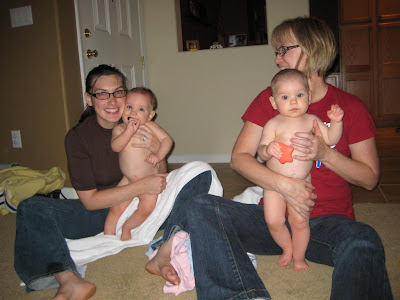 Opa is getting some good laughs and play time from both babies. They are really starting to interact and respond to the silly faces, dancing, and games. 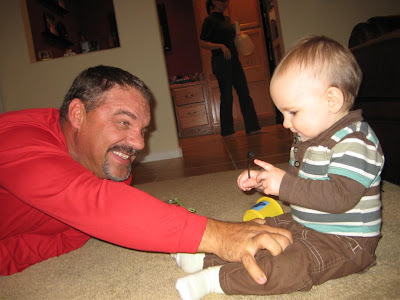 One of Layla's new things is the "bob and weave" move where she dips her head down and around. It's a variation of the groovin' move and Opa taught her how to use it as a wrestling headlock kind of thing. You can also hear the full range of her extraordinary voice and a few of the many sounds she comes up with.

Kendra's brother, Logan, invited us to join him and his friends for a night out. Being the adventurous ones we agreed. The place we went was called Sky High and it's a recreational indoor facility with huge rooms of trampolines covering the floor and the walls. If either of our babies ever say mom and dad are no fun, i'll just show them this picture as proof we ARE! 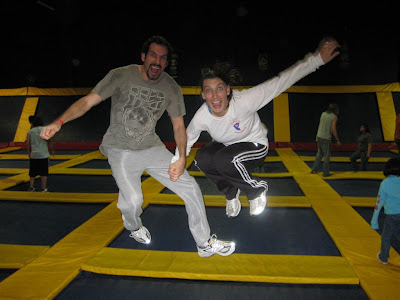 and one other humorous one of Logan and I where he's showing me his skills. 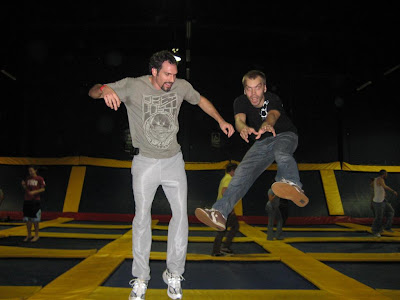 That black thing on my waist is my cell phone. We wanted to make sure Oma and Opa could reach us if the babies woke up or if anything happened. There's nothing I can think of they couldn't handle, but we're still paranoid first-time parents so it was more of a security blanket for us than anything. I used to do front flips and back flips with no fear in my friend's backyard when I was a kid, but something is very different now. my equilibrium and balance was way off and I had a hard time getting up the courage to try even the easiest flips. Must be getting old, huh...

Just after these pictures some random guy landed wrong and broke both of his legs! i mean compound fracture through both bones and they were sticking out of his skin. That was without a doubt the most disturbing thing i've ever seen in real life.

I get the creepy shakes just thinking about it... Anyway, we walked to breakfast yesterday morning just for something to do since it was sunny, but still really cold. Plus we feel less guilty for drowning waffles in syrup if we walk to and from the restaurant. :) When we arrived home we stood on Oma and Opa's back porch pointing out ducks and water and trees for the twins. They did their best to communicate back with all kinds of noises. The only recognizable word was still "light" from Easton. They're trying though and that's the important part! 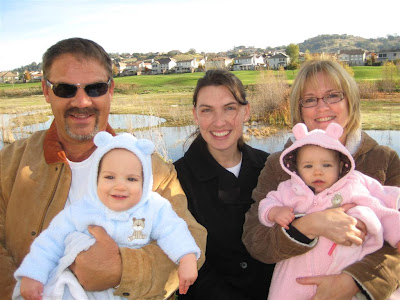 Another adventure was attending Kendra's friend's baby dedication and party. We've come to expect exceptional gatherings since they are always such great hosts. Easton and Layla came with us and we ended up quarantining off the living room as a coral of sorts to keep the twins from roaming around under everyone's feet. Several of the younger attendees of the party came over and played with us. As it turned out, Easton was a ladies man surrounded by all the girls who thought his toothy smile was adorable. 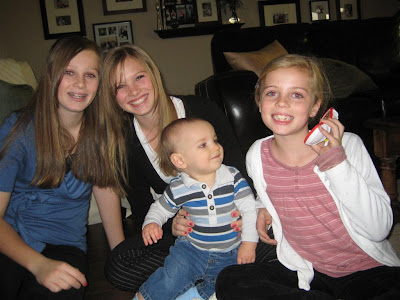 Easton is growing a sweet natural mullet and Momma threatens to give him a hair cut every day. :) Meanwhile, Layla was having an intense conversation with this boy using dragon voices.
She would wave her arms around in circles and make her loud noise then the boy would imitate her noises and motions. 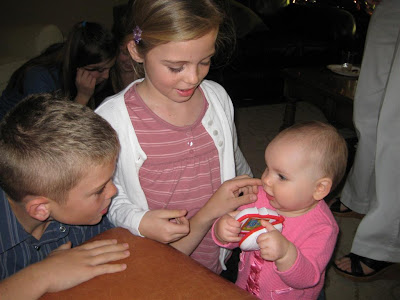 That's about it for the exciting parts of the last few days. Watching TV and rain on the windows while sitting by the fireplace has been wonderfully relaxing. That's goooooood use of my time right now.
Posted by The Four Webbs at 8:03 PM