Today we are celebrating Christmas at Oma and Opa's house because Kendra's brother, Logan, is only able to be in town until tomorrow. He moved to So Cal last summer and has to head back for work. He's a master of Rock Band and Guitar Hero although having a baby or two tugging on your back pocket makes it more difficult to concentrate. it's obvious Easton looks up to Uncle Logan already. 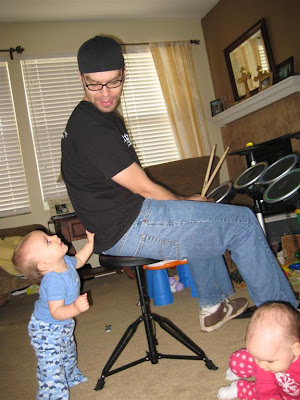 and of course Layla jumped in on the action as well by whapping Logan's leg as he drummed to the beat. 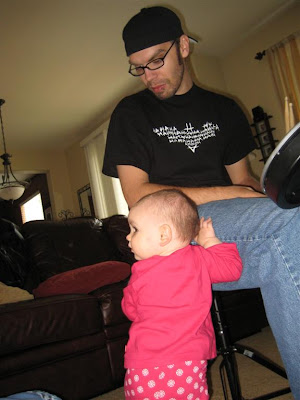 Now that Easton and Layla are wondering around the house at will we are much more careful as we walk in and out of the rooms so as not to step on anyone. If you stand around long enough in the same room as the babies, you're bound to feel their little hands tugging on your pants or legs as they pull themselves up. Looking down at her cute face and hearing her "goo, goo, gah, gah" noises would bring a smile to even the scroogiest person. 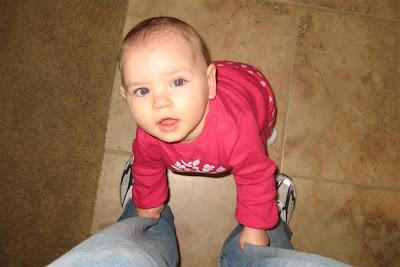 Days off work seem to disappear with every blink of my eye. it should be the opposite where vacation days filled with doing absolutely nothing except playing with babies and eating should drag on endlessly while work days should fly by quick. i'm doing my best to make the most of the time babies are awake. I sat on the floor with a baby in each arm as they watched their video for the day. unfortunately the video was much more interesting than Logan trying to take the picture so Easton and Layla are looking around him at the video. 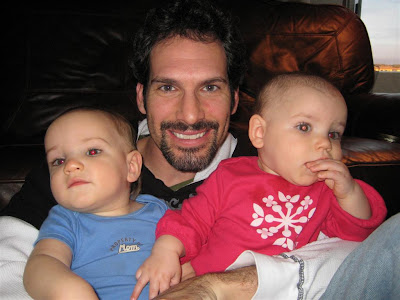 They are still right on schedule sleeping from 7:00 to 7:00 with two naps during the day. No complaints from us! Yesterday we gave Easton his first matchbox car. He was mildly interested in the wheels going around, but as with everything else at this stage he just checked it over a few times and stuck it in his mouth. 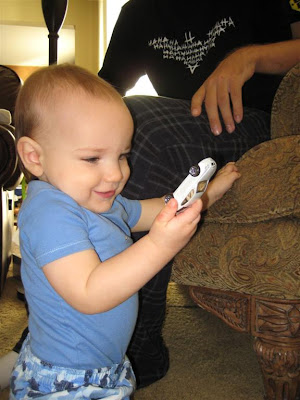 There was nothing symbolic about the type of car, but it's a Bentley in case you are wondering. This will be the only time in his life that a Bentley costs as much as a Camero so I may as well pick the superior car, right? We also bought Layla a dolly, but that wasn't much of a success. Kendra showed her how to rock the dolly, feed the dolly, and kiss the dolly. However, Layla immediately tried to bite the dolly's face so we have some serious work to do there.

See you again soon with holiday pictures from our Christmas dinner and games.
Posted by The Four Webbs at 11:12 AM