Fears of the Father

I'll consider this "Confessional Wednesday" to get you in the right mindset for my post today. No one has ever asked me, "what is your greatest fear as a new father?", but after many months of avoiding posting my feelings about this question I thought today was as good of a day as any to write my thoughts. That was a really long run-on sentence...

Anyway, based on my knowledge of good and evil I know worry and anxiety and fear are not from God. I've gone back and forth in my head whether I even whisper the words to describe the fear in my head. I wonder if it is more wrong for me to have this fear and keep it from Kendra and the world or is it more wrong to speak the words and go against my core philosophy of "speaking life" into my children?

Obviously if i'm writing about this then i've decided sharing is a less egregious sin than the alternative. My biggest fear is losing one of my babies. I don't obsess about it all the time or have ulcers from the thought, but it IS there and it does cause my heart to race occasionally. Since these are my first (and only expected) babies, I don't have that "old hat" mentality someone with 5 kids has. So where did this start and what are the realities of my world? It started back when Kendra was still pregnant and I was doing lots of reading in preparation for the birth of the twins. I ran across SIDS (Sudden Infant Death Syndrome) and the idea has perplexed me ever since. How can something so prevalent and devastating have NO answer as to the cause? sleeping on their stomach or too many blankets resulting in suffocation are a few of the unfounded causes, but how can I avoid such a disaster when no one knows what causes it? My concern heightened when one of my not-so-close friends lost his 5 month old boy to "SIDS", which is codeword for: no one knows the real cause of death. That's real. that's scary. Sadly enough, hitting so close to home in my personal circle of friends increased my fear.

The other root of my concern I identified is Kendra's false motherly insticts. Any time I come to bed late and accidently wake her up as I climb into bed or if she wakes in the middle of the night, she frantically asks, "where is Easton?" She tears the covers off the bed and tosses pillows around searching with her hands. Apparently she thinks he is in bed with us and he has rolled off the bed or worse, she's lying on him. Nothing has ever happened to cause this kind of reaction and I assure her every time he's safe in his crib. I can't tell if my fears have bled over into her subconscience or if her montherly instincts are affecting me? Either way, it's something I'll eventually get through because our babies are over 10 months old now and won't be considered "infants" much longer.

That's all I can think of to write about those feelings for now. I'm sure other fathers felt the same way occasionally. I just love my babies so much that I can't imagine anything like that happening to them. The "power of positive thinking" part of me continually prays against those thoughts and I speak words of life over them daily, but I won't lie... the fear of losing a baby is there. Part of the reason I am excited for them to turn 1 is because that is supposedly a milestone where I don't have to worry about SIDS any more. I know, I KNOW! I can't avoid them ever getting hurt. I'm not THAT naive to think I am "in control" and can keep them 100% pain free. They will scuff their little knees and bonk their noggins, but I'm ok with the accidental bumps and bruises. Every morning I walk in and find Layla jumping up and down while Easton rubs his eyes and squints up at me. That's the happiest part of my day... knowing they made it safely through another night and are ready to play the day away.

OK, back to the happy side of life and babies. We discovered a cute way to convey what happens every night between 6-7 PM for Easton and Layla. We say, "it's time for the 4 Webbs to have the four "B"s: The four B's are (in order) Bath, Books, Boobs, and Bed. The same routine every single night and it seems to work well for us all.

We went down town tonight for pizza and window shopping with Oma, Opa, and uncle Casey. Layla is continually intrigued by Casey's beard even though he chopped it down and shaved yesterday. I forgot he had dimples... 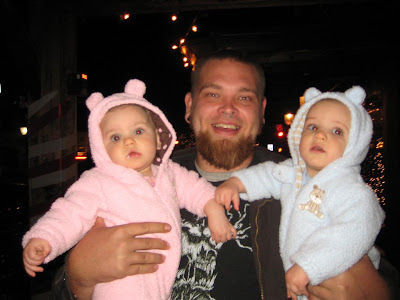 Even in the pizza parlor we had the obligatory anonymous smiley mom stop by and say, "Are they twins??? They are SOOO cute. I have twins also!" After dinner we walked the streets and kendra kept the babies laughing with her antics of singing and dancing. Here's a picture I'll call: Happy Bears (thanks, mom, for the laughs) 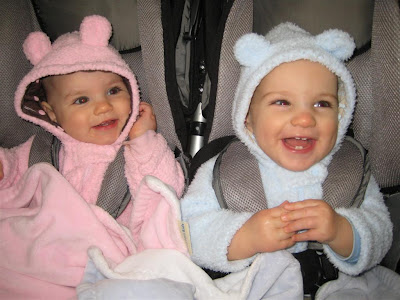 We are on to the second DVD in the "Your Baby Can Read" series and the twins love it. Layla learned a new skill of stomping her feet appropriately timed with the song, "When you're happy and you know it stomp your feet (stomp, stomp)..." She's got great balance and coordination for sure!

last night i captured another pic of Layla doing her stand up, sit down routine although once she stood upright she turned decidedly unhappy before sitting back down. The last one of her in the tub doesn't show her face because she had arms flailing around. Still a cute, funny picture even though I feel bad when she has her pouty lip... 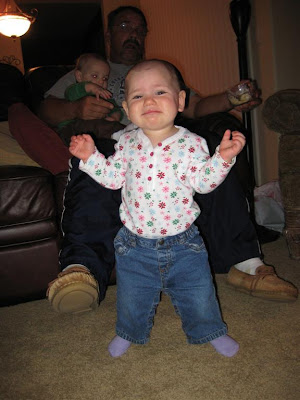 OK, that's enough for me tonight. kendra still suggests she'll chime in for her own blog soon, but tomorrow night we are hosting dinner with kendra's grandparents so her free time may be limited.

It's funny but we have exactly the same "4 B's" routine with Landon that you guys have with the twins! Great minds think alike I guess.

As for your fears, they are not unfounded. I have found that my biggest fear is knowing that there are actually people out there that hunt and prey on little children. Don't take your eyes off of them and show them love every day.

Thanks for the post. We hope you're enjoying your trip!

Even though Eli is almost 8 years old, there are nights that I wake up and go listen to each of them breathing in their room. Every breath is a gift from God. Have you ever read the kids book, "I'll Love You Forever" ? Each time I read/sing it aloud, I cry. The boys just love hearing that book! The absurdity of a mom driving across town to hold her big baby boy is great, but as a mom, I understand the love....and I bet if you asked moms of adult kids, they still wake up thinking about them, wondering if they are ok. It's just a different kind of love---the momma/daddy bear kind of protective love. It will give you instincts to know when they are in trouble and need you, later on...