Safe and Sound in Cali

We're here and we're safe! The 4 Webbs sped, i mean, drove through the night through darkness and extremely dense fog. After 12 hours on the road, Easton started crying about 5 minutes before we arrived. Apparently 12 hours is his limit. Nothing exciting to report from the trip other than it was quiet and we were all tired the next day.

Let me start off by showing you how Easton and Layla improvised once they found out we returned the sit-down baby walkers, which they hated. 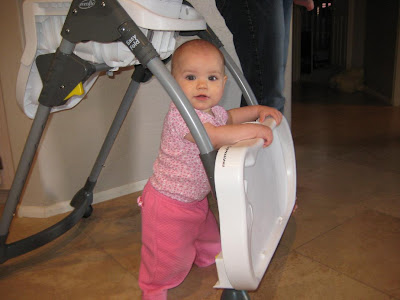 Yes, those are their highchairs with the trays hanging on the back in the storage position. 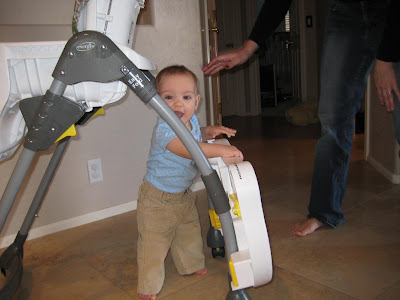 Easton and Layla both were smiling and walking around throughout the kitchen. The funniest moment was Layla pushing the highchair with Easton sitting IN it looking over the edge at her as they moved across the kitchen floor. Apparently there was no need for expensive walkers, just something with four wheels they could push while standing!

Evan as broad as Opa's shoulders are, there is only room for one of our twins up there at a time. They weren't practicing for playing "chicken" next year in the pool, but it's never too early to start learning pool games! 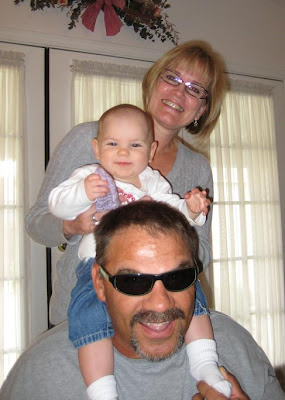 There is Kendra's mom, Oma, keeping Layla from falling backwards and there is Kendra's dad, Opa, holding her up on his shoulders. The 4 Webb's took over their house and turned it into baby central. Since they knew we would be here for such a long time, Oma and Opa had plenty of toys handy like this big stand-up toy with about 30 different buttons and moving parts on the top that all make various noises. 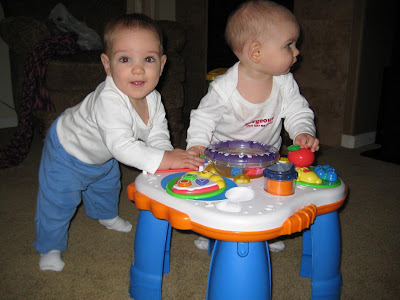 and this next "toy" held the attention of both babies for at least 15 minutes: It's just a door stopper, but it makes that really cool "doooooiiiing dooooiiiiing" noise, is virtually indestructible, and vibrates back and forth when they hit it. The ones at our house are just solid brass rods, so the ones here at Oma and Opa's house are WAY cooler.

One other toy they bought (as an early christmas) was a sit-down rider thing. You can see Easton's 4 teeth as he grins and rolls along. Unfortunately the wheels keep falling off so we need to exchange it for a sturdier version.

Kendra's mom strongly suggested we DON'T buy coats for the twins even though we knew they would need something warmer than the sleeveless onesies they've been wearing in Arizona since they were born. I expected she bought jackets for them based on what she said, but that was NOT the case. She MADE jackets for them! I was very surprised and grateful she took the time to make these cute, reversible jackets. Especially since they are pink and blue. :) 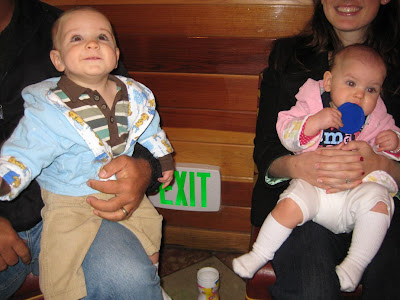 We spent yesterday napping and resting. The twins have slept surprisingly well in their pack-n-play cribs and adjusted to the 1-hour time difference without any problem. I'll be working from our corporate building here in California all of next week and leaving Kendra at home alone with the twins. I'm relieved to see them sleeping well and having happy days.

In the words of Oma, "Holy buckets it's cold out there!" We are so used to hot and sunny in Arizona EVERY single day. This cold and foggy weather is surprisingly enjoyable and refreshing.

Easton and Layla received their first balloons today while we ate at Red Robin. They thought the balloons were cool, but eventually became frustrated because the balloon wouldn't fit in their mouth and we were so afraid they would pop it. 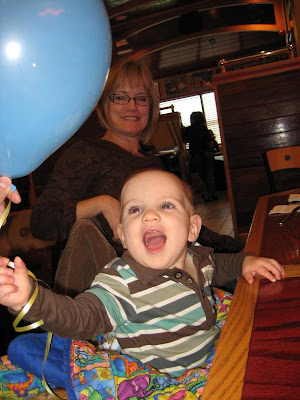 The only downer of the trip so far was Layla's little tantrum where Kendra had to tell her no for trying to attack Easton who was sitting quietly next to her. In their highchairs at home, the trays are so huge the twins are a few feet away from each other and not able to touch. In the new highchairs at Oma and Opa's house (the kind that strap down to the chair) we sat them too close together and Layla was "all up in his business" as Kendra says... Layla was even stealing Cheerios off his tray. This video clip is sad, but funny as you hear Layla's little voice quivering as she tries to get her way.

She may be on her way to getting an Oscar for such good acting. Layla is figuring out very quickly how to tug on mom and dads heart strings. Time to go for a walk in the brisk evening and grab some chinese food for dinner.

Thank you for the prayers and for stopping by to catch up with the 4 Webbs! We'll see you again soon!