This is obviously my last post for 2013.  I can hear the fireworks and neighbors even as I write this.  I'm still way behind on the Christmas adventures, but I've been mostly off work for 2 weeks now.  Lots of family time, date nights, and one-on-one time with Easton and Layla.

Dad and I went golfing, which is not out of the ordinary.  What makes our recent outing memorable is that Easton joined us for his first round on a real golf course.  Oupa spent several hours over the past year or so with him on the putting green, in the back yard, and at the driving range.  Now it was time to give him a taste of what all that practice is for.

He hopped in the golf cart with me and screamed with excitement as we sped down the pathway towards the first hole.  He was so elated and excited that as we passed the outdoor patio where a dozen or so golfers were eating, they all looked up and smiled as we rode by.  I yelled out "it's his first round!" and they clapped and cheered.

We chose an executive nine-hole course, which is shorter than a full length course.  He teed up on his first tee box.  After a few practice swings and misses he made contact to send the ball scooting along the grass towards the green.  I was as proud as could be. 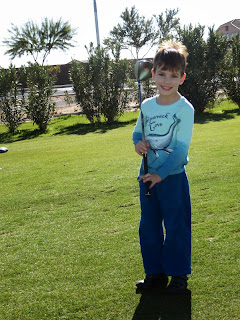 We had several lessons along the way that every rookie golfer needs.  Such as, don't kick other people's ball off the tee, don't step on the hole, don't pick up the money on the green because it is being used as a ball marker, and don't yell during someone's back swing.  He received instruction well and by the end of the round was managing his etiquette very well. 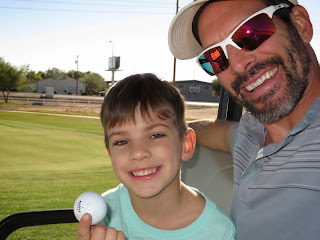 Easton has three clubs:  driver, pitching wedge, and putter.  During every ride between holes I would say, "do you know how to be a great golfer?  Drive, pitch, putt."  He recited the mantra over and over again.  On one of the shorter holes he hit his tee shot long and straight, for a five-year-old.  He pitched the ball up on the green close to the hole.  We didnt put any pressure on him as he putted for par, but I was on pins and needles thinking, "Easton is putting for par during his first time ever on a golf course!"  He missed the cup, but then went over and tapped in for a bogey.  I've seen other kindergartners play Chopin on piano and memorize huge amounts of information, but I don't put those kind of expectations on Easton.  These little victories and accomplishments where he is passionate and happy mean much more to me than those where a child is forced to perform. 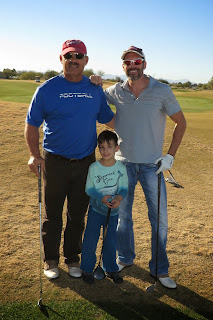 Another memorable outing was when Ouma and I took the twins to the duck park.  The relatively cool day (high of 60 degrees) led to wearing jackets and Minion hats.  The leaves on the ground indicate fall is finally hear for us Phoenicians. 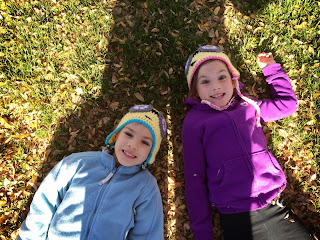 We brought bread to the duck park to make friends with the locals. 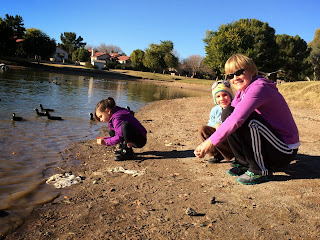 These two can go through a loaf of bread in under five minutes.  They are very giving when it comes to feeding the hungry.  Easton and Layla edged their way to the water more and more as the bread throwing went on.  Their shoes and hands were a little muddy, but that's just part of having adventures.  It's been a long time since we've been to the duck park, but we've been going here since they were two years old so it's familiar territory. 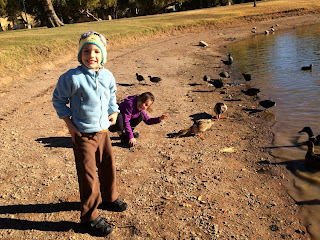 One of Easton's gifts was a marshmallow gun.  We took the gun and a bag of mallows down to the greenbelt for some fun.  After each round of shooting, they would take a handful of marshmallows and shove them in their mouth, then put a few in the tube for shooting.  At one point they used the gun to shoot marshmallows directly in each other's mouth.  The green belt looked like a snow drift from the bag of spent bullets.  Playing tag was a big hit too. Especially if you were tagged with one that stuck to the shirt and could be easily eaten. 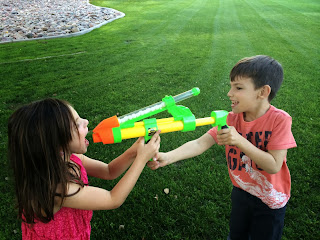 Oupa golfed four days out of five.  I think that's his record for number of golf outings in 2013.  We went with Dave, a friend from church, and had a great day of windless, 70 degree sunshine on the course.  I had two birdies and the best 9 holes of golf I've seen in the past decade.  Maybe Easton is rubbing off already on me. 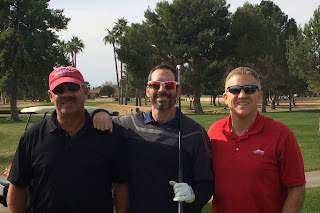 I'm excited for 2014, but a little sad to see 2013 go.  Easton and Layla will never be five-years-old again.  We've had such an incredible year of adventures and growth...  all of us 4 Webbs.