Our church allowed the kids on stage to tell the Christmas story in a unique way.  Easton and Layla practiced the church songs and hand motions with even more heart than their school holiday songs.  The performance was really well done and fit in with our church culture well.  Layla was one of the host of angels who appeared when Jesus was born. 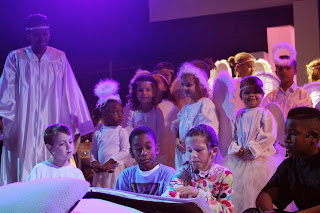 There were some cute kids, but Layla stole the show.  Her stage presence is something special. 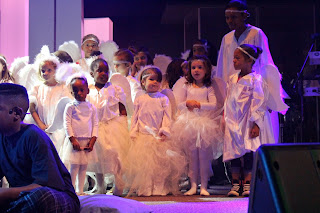 Easton played one of the wise men and entered the performance down one of the main aisles.  He galloped appropriately, but then noticed the big screen projection of himself.  He stared at the big screen and walked very slowly onto the stage.  It was the cutest thing to see him be enamored with seeing himself projected to the church audience. 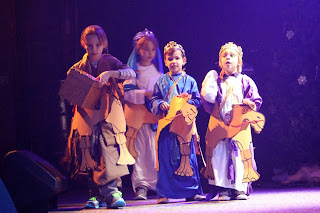 When he got back on track for his part he played it well and made us very proud.  Afterwards he asked to never be on stage again.  Not because anything bad happened, but being on stage and acting and singing just isn't his bag... baby.  and that's perfectly OK with me.  I'm happy he tried it out and succeeded.  I also happy he knows what he is passionate about and what he is not.  This may be the only time we ever see Easton on stage again in a voluntary role. 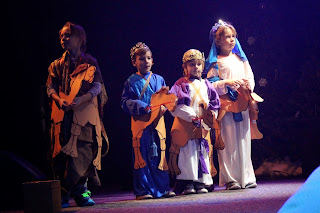 Layla was clearly the most animated girl on stage with the most accurate hand motions to go along with her strong voice. 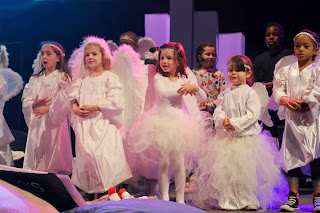 Then Layla was given the microphone and requested to pray over the service.  I was honored, as a parent, that the children's department chose Layla from the entire group of kids to pray.  Not only was it a prayer in front of the entire congregation, but it was from her heart and spontaneous.  If she was able to recite a mechanical statement or verse from memory, then I would be glad.  However, for her to have enough understanding of how big God is and a strong enough relationship with Him to have a conversation in front of hundreds of people...  That makes me as proud as I will ever be as a father.  There is nothing more I could ever hope for from Layla and Easton than to be connected to God in a way that they speak with Him and hear from Him.  Here is the video clip of her prayer.

I'm about 7 days behind reality with the blog, but my goal is to catch up quickly over the next few days now that I'm on vacation!