Welcome to the New Year

I'm planning to write 2013 on my checks and forms for the next two months.  Maybe it's a subconscious way to hang onto the awesomeness of 2013 for as long as possible.  Don't get me wrong; 2014 has great promise and potential, but I don't want to chase the potential of tomorrow with such focus that I don't take time to savor the greatness of yesterday.

Casey, Logan, and my new sister-in-law Bree returned to the California life.  Ouma and Oupa stayed for another week of family time.  Last month while walking through the neighborhood with the twins I spotted a gift card on the side of the road.  I usually don't bother picking them up because I assume they are spent and worthless.  However, for this one I put it in my pocket because it was for Amazing Jakes.  I kept it with the intention of it being a reminder for me to add it on my ever-growing list of fun things to do with the twins.  I sat down at the computer and figured it was worth 2 minutes of my time to see if there was any value left on the gift card. $50.  That's how much credit was on the card.  I tucked it away in my drawer and saved it for a rainy day, metaphorically speaking.  This is Phoenix where rainy days are meant to be outside playing in the puddles.

Anyway, Oupa was considerate enough to go with me and the twins for a few hours of entertainment.  Kendra and Ouma took the opportunity for some mother-daughter time together.  We are very intentional about splitting up with many combinations of people such as: just the boys, one-on-one, grandparents and twins, etc.

We ate mountains of bad pizza and cheap soft serve from the all-you-can-eat buffet.  At least they had a decent salad bar full of roughage to push the junk through our gut.  There's a silver lining to every cloud if you look hard enough.

Once we started on the attractions and games it was a blur.  First stop: laser tag.  It had a space invaders theme so Easton was jazzed.  Layla thought it would be scary, but she stayed by my side the entire time.  Easton and Oupa paired up together and we all four had a blast.  This was the highlight of the trip based on their excitement and persistently asking to do it again. 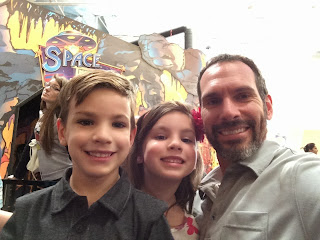 Easton and Layla attempted the rock wall because we had the all-inclusive package to do all the rides.  They were brave and strong enough to do this, but their skills were the limiting factor. 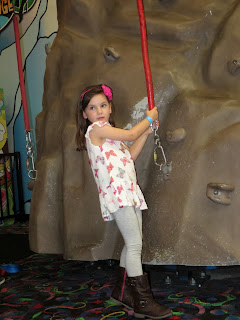 They both made it a few feet off the ground and then gave up.  The holds were quite far apart so it was extra challenging for their height. 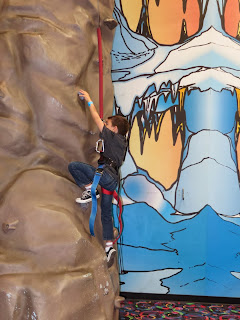 Even though they didn't go very high, they did it together and gave it their best shot.  We were proud and congratulated them on their attempt. 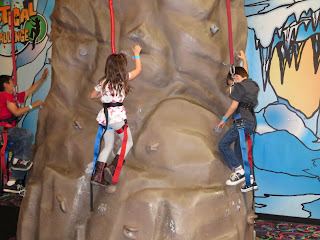 The train was the cheesiest ride in the complex.  It was a tiny, tiny oval track that went around 6 times.  Even so, the twins thought it was fun and that's all that matters.  I thought they might be disappointed, but after the ride was over they were surprisingly pleased with the short ride. 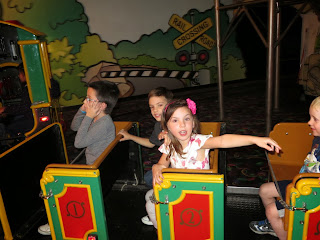 Another big hit was the frog hopper.  For a five-year-old this was thrilling.  Unlike the Tower of Terror incident (also known as "The ride which shall not be named") this was gentle, open, light, and fun. 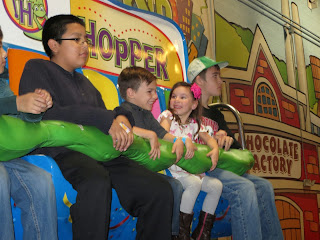 The scariest ride for me was the mini-coaster.  I rode solo in the car directly ahead of Oupa.  Easton and Layla sat on either side of him. 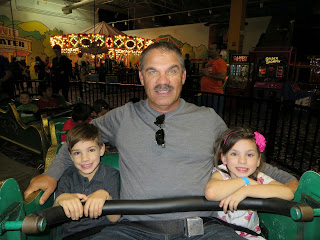 As the coaster spun around in a circle, the centrifugal force smashed me against the side of the coaster and smashed Oupa against Layla.  He spent the entire ride, both forward and backward, doing his best to keep from squishing poor Layla.  At the end of the ride Easton had a comfortable 6 inches between he and Oupa.  His efforts to save Layla paid off because they were all smiles during and after the ride. 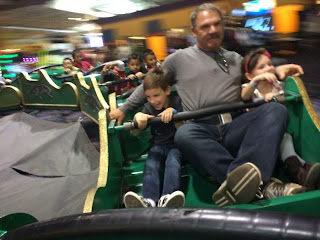 The longest line was about 30 minutes to ride the go-karts.  The simple, small oval track was boring for anyone who's been to Branson, but for the twins it was a speedy race of a lifetime.  Oupa and Layla were in one car. 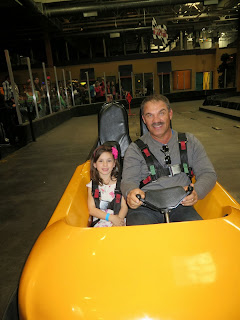 Easton and I were in another.  Oupa and I intentionally did some passing and side-by-side action to intensify the racing experience.  In the end I let Oupa pass us and take the checkered flag.  Mostly because Layla is competitive and cares about winning.  Easton was content to just enjoy the ride. 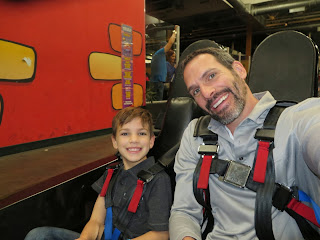 The three of us rode the Chocolate Tea Cup ride and gave Oupa a break from the action.  We spun around both directions so much that my head was spinning long after the ride stopped.  If you struggle with motion sickness this is not the ride for you.  It doesn't bother me so much that I puke so bring it on! 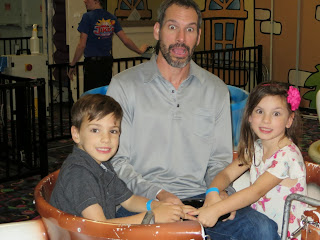 We spent about 3 hours playing games, riding rides, and eating buffet food.  I'm certain the twins will have this as a happy memory for many years to come.  The time, money, and effort was well worth the satisfaction of being a part of their enjoyment.

There were several times during the past two weeks where Easton and Layla had one-on-one Daddy time.  Easton asked to go for a mountain bike ride with the trail-a-bike.  We made it half way out and took a break.  The two of us laid on a big rock and were silent for two full minutes. 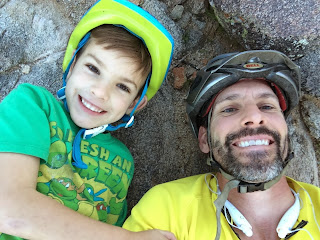 We were out in the middle of nowhere with zero sounds of the city.  The only sounds were birds and planes and the breeze.  I explained how God wants to talk to us in these quiet moments.  The faith of a child is amazing.  Easton believed me and we listened to hear God's voice.  Afterwards I asked what he heard.  He said, "God told me he likes how I'm a good mountain bike rider."  I responded, "Yes, that sounds like something God would say.  He wants to create in you who he made you to be."

The video clip is unexciting, but I like how it shows Easton's personality.  When he is apart from Layla he has more of a chance to share of himself without getting run over by her dominance.


I also had Daddy time with Layla.  She asked to wear her new Anna (from the movie Frozen) dress.  I agreed and she proceeded to put on make-up while accessorizing.  We went to the mall as she requested.  I dislike routine so we did everything completely different than our previous mall visits.  We started at Barnes and Noble where I read books to her for 40 minutes or so.  She picked out whatever books her little heart desired and I gladly read.  She followed along with me word-for-word, but insisted I read instead of her.

We went to the jewelry department of Sears because I was looking for a small, analog, princess watch with all numbers 1-12 printed on the face.  We didn't find that, but we did see several really nice pieces of jewelry on clearance.  We paused in front of a jewelry stand just long enough to take a selfie.  She was content to have my full attention for a couple of hours.  Walking with her through the mall is a treat all on its own because she smiles and waves and says, "happy new year!" to every stranger passing by. 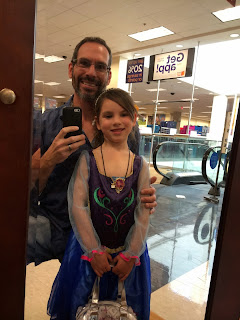 Towards the end of Ouma and Oupa's trip I realized the minimalist DirecTV package we have didn't include ESPN.  I also didn't realize 99% of all sports are broadcast on ESPN.  The only thing I did know was that college bowl games were on and Dad really loves watching football.  I changed our package to the lowest one that included ESPN and he was able to watch a few games.

Then I saw a local friend on Facebook post a picture of his tickets to go see the Fiesta Bowl game.  The thought crossed my mind, "I wonder if Dad would like to see a bowl game live?"  I called Kendra and she said something like, "duh!  yes he would."  I called the Facebook friend to find out where he bought the tickets so that I could get a good deal on a pair.  He said, "hang on a second. i'll call you right back."  A few minutes later he sent me a text indicating I have a pair of tickets waiting for me at the will call window.  I replied to find out how much they will cost and where they are located in the stadium.  He gave us the lower level tickets for free!

I never found out how much they cost, but we enjoyed every penny's worth of whatever he paid.  The sea of Baylor fans showing their bear claw hands was quite a sight. 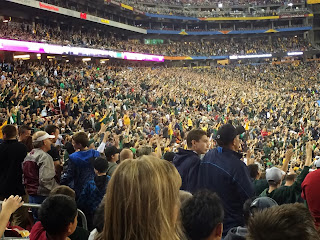 The noise level was twice as loud as what I remember from the Cardinal's game I attended a few weeks ago.  Dad and I had a great time even though Baylor lost.  The hours together without the twins were relaxing, as you can imagine. 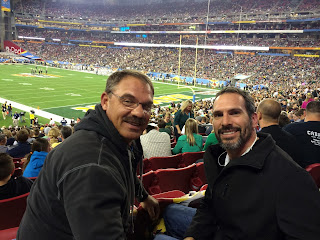 Kendra and I had a few dates while Ouma and Oupa were here.  Not enough, but I'll take what I can get even if it is something as simple as grocery shopping together... alone.  This wasn't an ordinary trip to the grocery store though.  We were on a mission to fill our fridge and cupboards with Daniel Plan approved food.  We are starting a 21 day fast on Sunday based on the healthy lifestyle described in the book of Daniel in the Bible.  The description of the Daniel Plan is linked here if you're interested. 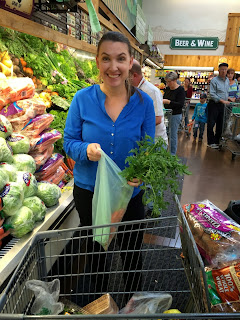 The perfect afternoon weather is too good to pass up opportunities to be outside.  I'm continually looking for excuses to be outside with the twins.  We went for a long hike together on South Mountain.  We normally go to the ramadas and climb the peaks, but I don't want to get into a rut.  Instead of our normal ride we hiked from the water town on Desert Classic.  We headed off into the desert and I let them decide how to navigate the forks in the trail.  They did great in moving out of the way for bikers and finding their way back to the van.  Everybody starts somewhere even if it's in their own back yard. 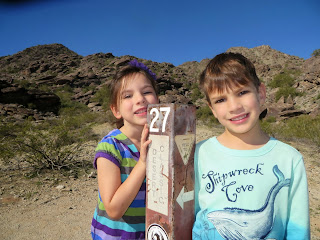 Ouma and Oupa left us.  Oupa had to go back to work and Ouma had absolutely NO reason to leave!  Why did you leave us?  You're retired and Oupa can take care of himself!  Please come back.  please? OK, fine.  I guess we'll have to wait for their birthday in 5 weeks.