When we moved into our house two years ago, the neighbors gave us their Christmas tree and ornaments before moving out of state.  We didn't open it until this past week.  As we assembled it we kept having to get increasingly larger ladders to add on the next section.  We didn't realize until after it was completed that we own a 13 ft. tree. That's not a typo. it really is 13 feet tall.  It's difficult to get a perspective without being here, but this picture helps.  I had to lay down on the ground and shoot upwards in order to get the whole thing in the frame. 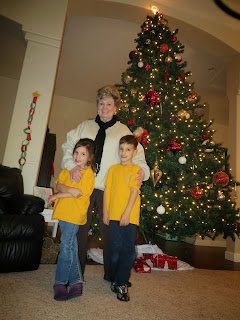 And you might also notice GAM (Great Aunt Mary) is in the picture with Easton and Layla.  She arrived for a week-long visit.  We've been waiting for her to hang out with us for 18 months and she finally came through.  By "came through" I mean she drove her Nissan Quest minivan here and will take our Honda Pilot on to California, then back home to Oklahoma.  Her van has about half the miles of our Pilot and is three years newer.  We are really excited to swap vehicles.  Kendra has finally made the transition to a soccer mom complete.

Anyway, we had a few excellent days of GAM time and included her in our day to day routine. 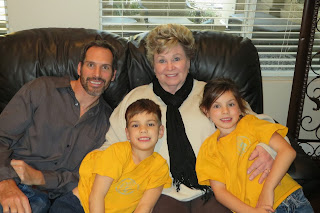 The big event of the weekend for the twins was the pancake breakfast and Christmas concert their school performed.  We drove around town seeking the unfamiliar campus where the event was held.  We were late and running on fumes in the gas tank.  It felt a little like an episode of Dukes of Hazzard.  Well, except we were in the city... and driving a minivan... and not running from a police car.  OK, it was nothing like the Dukes of Hazzard, but it was worrisome as to whether we would make it to the event on time.

Luckily, we made it just in time for the performance.  Not enough time to eat pancakes beforehand, but there's always time to greet friends and give hugs.  This is Jordan, Layla's best friend. 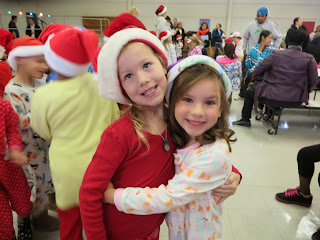 The kids all lined up on the risers.  None happier than Easton and Layla though. Their smiles and confidence shined like like stars. 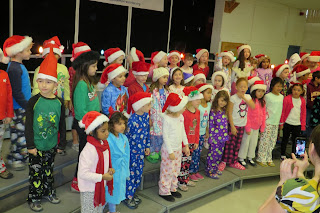 They sang several Christmas favorites with hand gestures and nasally voices.  It was wonderful.  I  smiled the entire time while giving thumbs up signs and loud applause between songs.  I spent most of the time just enjoying them with both eyes wide open instead through one in the lens of a camera.  There are moments to capture on media and moments to just enjoy without worrying about technology or camera angles.  I did a little of both this day.  Here is a short video clip of Easton and Layla singing Up on the housetop.


Layla had a key performance when they sang Silent Night.  She is one of the star voices of her class so she was selected to stand down front with a couple of other happy singers.  She did great.  No fear, just pure energy and an angelic voice.  I may be a bit biased, but others around me said the same thing. 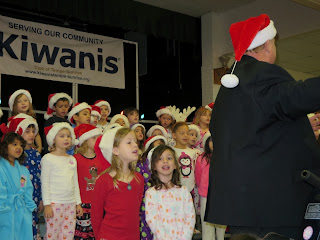 After the singing ended we chowed down on pancakes and some meat-like substance.  The kids were brainwashed by the school every day for weeks.  I know this because every single day for the two weeks leading up to the event Easton and Layla mentioned the fact that this is an all-you-can-eat event. 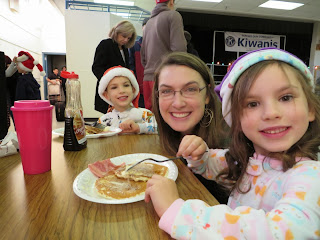 Aunt Mary and Joel attended with us, but unfortunately I didn't get a single picture of them here with the twins.  Mary and Joel were gracious to follow us into a sea of five-year-olds in pajamas and a zombie-like mob of camera wielding parents.  Bless their hearts for braving the masses and being good troupers about it. 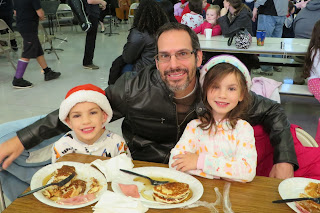 We had one kid-less night out with just Kendra and I with Mary and Joel.  We treated them to a fancy meal at Chop steakhouse.  Prime rib was amazing.  makes my mouth water just writing about it. 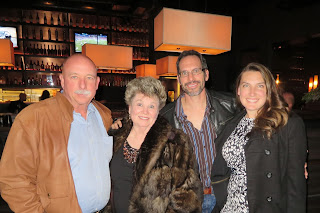 Let this sink in...  Here is a picture of Uncle Dave with the three of us only months before he passed away. 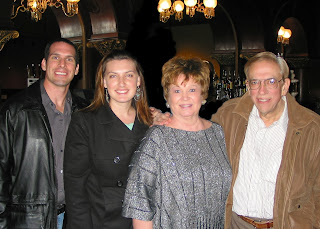 The similarities are eerie.  I know it isn't right for me to compare Joel to Uncle Dave, but it's impossible for me not to because of the history we have together.  It's not so much a measuring stick for Joel to measure up to, but it's more like a comparison of coke and pepsi.  it's easy to know the difference when you drink something you're not familiar with if you frequently drink one of those.  Joel is not filling Uncle Dave's shoes, but he is staying in the house Uncle Dave built and holding hands with the only woman I ever saw him with.  It wasn't strange in the least bit; Just different and at the same time familiar.

Joel was brave enough (and fit enough) to climb South Mountain with the twins and me.  We made it to the 4th peak!  This is a record for distance of hiking.  The progress of their physiology is really ramping up.

Before we left to go hiking Joel asked for a hat.  I gave him two options:  a baseball cap and this hat. 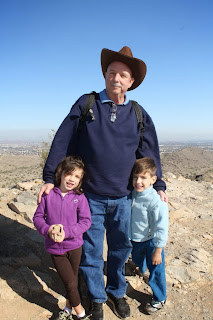 So what?  Well, that is Uncle Dave's hat that sits in my closet.  I see it every single day and it reminds me of him.  Not because Uncle Dave wore it frequently, but because it was one of the things he was proud to own.  It was a part of him and his heritage.  I never let Joel know it was Uncle Dave's hat because I don't want him to feel like he has something to live up to.  I gave Joel a fair shake to show his own character and nature with no pre-conceived notions or judgments.

The bottom line on Joel is that I'm very impressed.  I'm impressed with his level of spiritual authority, foundation on the truth of who God is.  He also has a balance of Bible and encounterism.  Mary is experiencing, for the first time in her life, what it means to be "covered".  Joel prays for and with her.  He talks about the goodness of God.  He loves Mary with a submission and preference for her.  He's wise, successful in business, converses well with an interest in me and the twins.

I didn't want to like him, but I do.  I'm very protective over Mary because I made Uncle Dave a promise to take care of her as best I could.  That includes keeping the wrong influences out of her life and adding the right influences. I don't think I could ask for a better person to be with Mary and I support their decision to get married 100%.  The most shocking part of my support is how it only took a few short days of spending quality time together for me to really get to know him.  He shared so much of himself in a genuine way that I couldn't help but like him.

There are dozens of pictures of Easton and Layla with me on top of South Mountain, but this one is the best so far.  This is the highest they've climbed in altitude.  Each time we go I lead them further and further up the hills to get a better view of the valley.  There aren't many peaks higher than this one.  We'll have to walk a few miles together to get to an elevation with a better view than this.  I want the twins to have this top-down perspective on their world.  They are the head and not the tail seeing from above and not below. This is kingdom mentality at it's most tangible level. 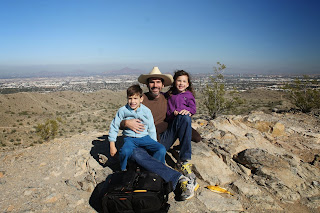 Even with all this 360 degree view of the largest metropolitan area in the country (as measured by square miles) they found a rock to be more interesting.  That's right, a rock.  It was broken in half by who-knows-what.  The two fractured pieces of rock fit together perfectly.  They were intrigued by the idea that those two pieces still fit together when you put them against each other.  Simple wonders are sometimes the most amazing. 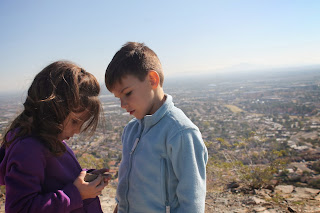