Welcome to the wacky Webbs Wednesday wildness. I'll try to summarize the last couple of days by describing the highlights with what I call, "boo - hooray".

1. Today I skipped out of work for 30 minutes - BOO (bad employee)
So I could go across the street to the local library and spend time with Kendra and the twins at "story time" - HOORAY! I had as much fun watching them bounce around as they did bouncing.

2. Today Easton stole a nutrigrain bar from the grocery store - BOO
It wasn't really stealing, but he was SO hungry we opened the box while shopping and then paid for it along with the other $400 worth of groceries. HOORAY! 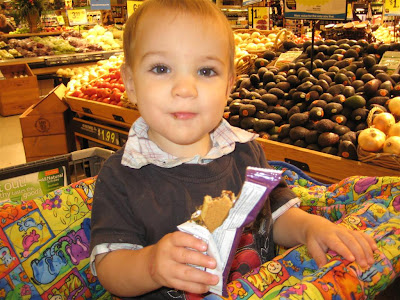 He devoured the entire nutrigrain bar followed by multiple requests for "more" both verbally and through sign language. Then I heard the word "apple" about 30 times. (no exaggeration) as we passed the fruit. just "apple, apple, apple, apple..." The boy really knows what he likes.

3. Layla had to wear a blue shirt to bed because her pajamas were covered in strawberry smoothie from breakfast - BOO 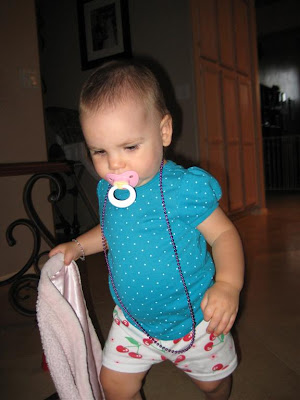 We are grateful she has clothes to wear and none of us (including Layla) care when she's a fashion train wreck. She sleeps just as soundly and is just as beautiful no matter what clothes she wears. HOORAY!

4. We live next to the railroad tracks, which have increased the number and frequency of trains - BOO
Easton absolutely loves trains and wakes up every morning emphatically saying "choo choo!" as we rush out the back door to see the train chug by. A conductor even waved at us. HOORAY!

5. Hundreds of people in our town are being laid off this week from my company - BOO
I'm not one of them, so my job is safe. - HOORAY!

WFMW (Works For Me Wednesday) - Give your kid a Nunu. Easton and Layla have slept with their Nunu every single night since the day they were born. For Kendra's baby shower Brenda Walker (DeAnna's mother) gave Easton and Layla matching Nunus. I was so happy to see she gave us one pink and one blue! Yes, I know it's lame and I should just get over it, but I'm a HUGE fan of everything for Layla in pink and Easton in blue. When they turn 18 they can pick their own colors. Until then it's pink and blue. OK, until they can ask for a different color by name, i'm going to push for pink and blue. There. that's compromise for you.

Anyway, the Nunu is a little blankie with a rabbit head stuffed animal thingy in the middle. It feels like a lamb on one side and smooth satin on the other. Here is a picture of Layla completely covered by her Nunu on the first night she and Easton arrived home from the hospital after their birth. 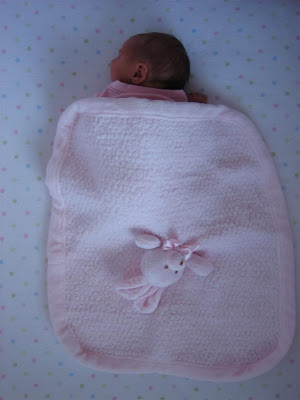 I can't believe she was so tiny! If you look up earlier in the post at the fashion train wreck you'll see she is carrying the exact same Nunu. Awe, that's sweet isn't it... And here is Easton strutting around with his Nunu earlier this evening. 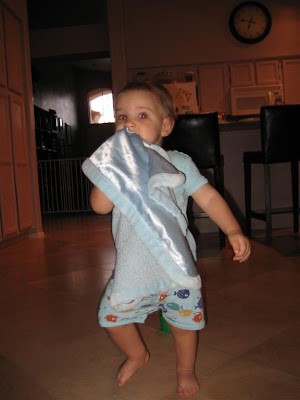 And one other picture of Easton and Layla soaking in one last book reading with mommy before bedtime. Notice what is in each of their hands? Yep, their Nunu. 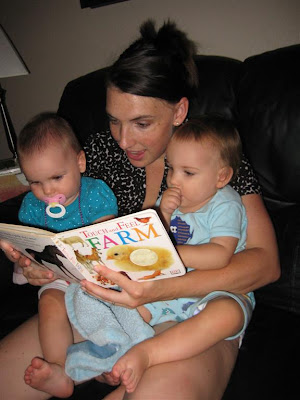 I have no idea what the day of reckoning will be like when we have to ditch the Nunu, but between now and then they get a huge amount of comfort from sleeping with the little blankies. If you choose to do something similar with your kid, please do everyone a favor and wash it once in a while. I've seen some other kid's blankies and they are disGUSTing! Caked with boogers and food and slobber, yuk. Don't worry, your kid will not abandon a freshly washed Nunu. I promise.

And now for my movie reviews. First of all let me say how excited I am to have the TIME to watch a movie or two with Kendra! Don't worry, this'll be short because I'm a "bottom line" kind of guy. In honor of Easton's affection for apples, I'll use those as the rating.

Taken - I give it 4 out of 5 apples. After seeing this awesome action/adventure, Layla is not allowed to leave the house until she is 12 years old. She can't leave my sight until she is 16, and she's never going to Europe... EVER. If you have a daughter, please be forewarned because you'll become an over protective worry wart (as if you aren't already). Apple, apple, apple, apple. Go see it.

Fireproof - I give it 3 out of 5 apples. acting deserves a 1. motivation and conviction to be a better husband deserves a 5. I only cried for the last 8 minutes of the movie and was able to blame it on allergies so Kendra wouldn't think I was mushy. Apple, apple, apple. Make your husband watch it. You'll thank me later.

Never back down - I give it 2 out of 5 apples. I'm really into martial arts, but even for me it was tough to watch all the way to the closing credits. I recognized a few fighting techniques, but don't waste your time. I can't believe it was rated PG-13? Seemed like a definite R in my book. I'd never let Layla or Easton watch that at age 13. Apple, apple. This one is rotten to the core!

One last picture I just can't help but post. Easton figured out how to put the bunny ears on all by himself! When I told Layla to put her bib on (knowing she hasn't figured out how to do it yet) she put it on top of her head. Nice try! 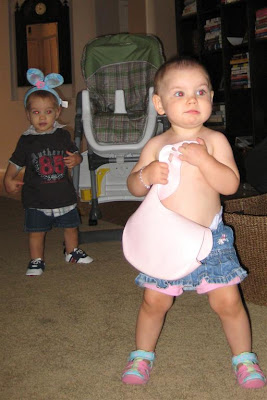 I love our crazy household and can barely remember what life was like back when Layla fit under her Nunu...

Have an awesome Thursday and we'll see you again soon.
Posted by The Four Webbs at 9:30 PM