The 4 Webbs have had some interesting experiences over the past few days. Some good, some bad, and some ugly.

The good: Easton and Layla both have new teeth poking through, which means they are that much closer to stop teething. Won't that be a marvelous day... Layla has 8 and Easton has 7. Plenty of teeth to chew larger pieces of cheese sticks and bananas. Another good thing lately is the addition of signing and saying Daddy more regularly. Here's a short clip of Easton and Layla showing their skills.

It does wonders for my day to walk in the door from work hearing them say Dada in stereo. The other good thing is Layla’s newfound joy of finding trash and throwing it in the trashcan. She finds the tiniest speck of crumb and will run over to one of us indicating she needs assistance with the foot pedal on the trash can. So we wonder over to the trashcan and she throws whatever she found into the trash. The only potential problem I see is that she doesn’t discern what is trash and what isn’t so we may find valuable things (non-trash) disappear randomly and we’ll have to check the trash can...

The bad: On mother’s day while exiting the church parking lot I rear ended the car in front of me as we were leaving. :( No big deal though because there was no damage to either vehicle since I basically rolled into her. THEN the next day (Monday) Kendra was running some errands and this big metal rod

came flying off a vehicle into her lane and destroyed some mechanical parts of the transmission. Fortunately no one was injured and everything will be covered under insurance, but it’s unfortunate for Kendra’s mommy-mobile to be out of commission for a few weeks.

The ugly: I went mountain bike riding with Judson and in one ride we managed to see the largest wild scorpion I’ve ever seen and the longest wild rattle snake I’ve ever seen. By wild I mean not in captivity… Anyway, the scorpion was hugely plump and hairy. Luckily he was also squished so he didn’t pose any real threat. 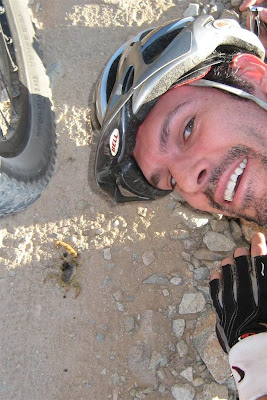 Still really creepy though. Then a little further down the trail Judson passed within a few inches of a rattle snake who was just trying to cross the trail. He screamed in a familiar way, which I’ve heard before, indicating he must have seen a snake. Yes, it happens often enough I was able to assume he had just seen a snake. We jumped off our bikes and took a few minutes watching him mosey across the trail. Here’s a video clip and you can hear his rattle twitch a few times.

And for those of you without video, here’s a picture: 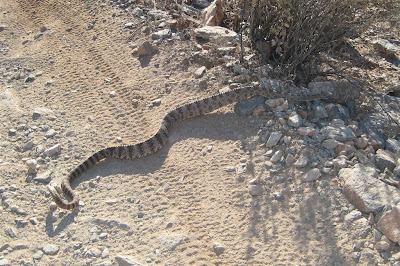 WFMW: Now on to WFMW (Works For Me Wednesdays) where I normally do some product review or parenting technique that has proven to be valuable. Not today though… Today I need to know what works for YOU! The problem is very simple and the solution is very complicated. Easton is a biter. I’m not talking about a little nibble here and there. I mean he digs in takes a big bite. Fingers, legs, elbows, and anything in front of him gets bitten. When I asked the guru of all things related to children (my sister, Joanie) she didn’t have an answer either. If SHE doesn’t have a scientifically calculated and proven method of curing a situation, then I know I’m in big trouble.

My options are:
- Say “No!” when he does it or is about to do it (we tried this and it doesn’t work)
- Spank him, which is illegal in some states and I don’t want to argue with anyone about the virtues of spanking
- Bite him back. Kendra tried this once, but that didn’t work. Doing this over and over will only reinforce Easton’s behavior because it falls under the ridiculous mantra of “do as I say, not as I do”, which doesn’t work.

Can you help me out? What worked for you? I need options, folks! That's it for today so have a great hump day and come back again soon.
Posted by The Four Webbs at 10:07 PM

Scary snake man! When Landon used to bite Michaela, we would say "Ouch, that hurts...please don't", and then we'd put him down...he quickly got the idea that if he bites us, we're not holding him.

Obviously this only works if you're holding Easton, but it could be worth a try.

To piggy back on Dustin's comment...I was always holding Landon when he'd bit me on the shoulder. But one thing you can try after saying "No Biting" firmly, if you aren't holding him and can't just put him down, immediately divert his attention to something else. for example, "No Biting Easton." Then grab a toy and tell him he can play with this instead. Or chew on that. Might work. Landon quickly grew out of that stage (luckily!). The biggest problem is when you react to the situation. When I gave out a startled "ouch!" Landon alawys giggled at my response thinking it was funny to see my reaction.

Logan was a biter and we tried All of the Above...he got so bad that we had to wash his mouth out with soap...only took 2 times and he has never bitten again! When I did it I told him he was using his teeth incorrectly and told him what he could use his teeth for i.e. eating, chewing, etc...

thanks for the insight! we'll give those ideas a try and see if one works for our little biter. Even though as they say, "every child is different" so it's anyone's guess which method, if any, will work.