Easton and Layla recently made the switch from two forced, partial naps per day to one loooong nap. Kendra grew wiery of there second nap turning into a battle where the twins rolled around in their cribs laughing and talking for an hour. The result of missing the second nap would always be grumpy babies who could barely keep their eyes open close to bed time at night. The downside to compressing the nap schedule from two to one is Kendra has one break during the day instead of two... So much for Kendra's union rights!

Anyway, the twins are healthy and happy so far this week. I had some quality alone with my babies while mommy went to the gym last night. We did the usual routine of dinner, riding in the Chariot jogger to get the mail, bath, books, and bed. In between all of that I caught a picture of what happens when you don't have a big play structure in the middle of your living room: 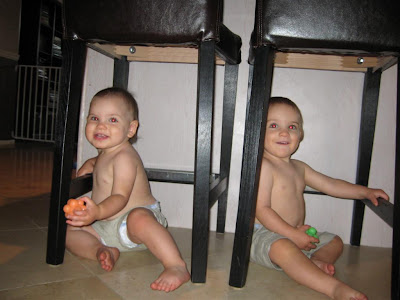 Easton and Layla frequently play under the bar stools in lieu of a play structure. Each has a ball, each has a bar stool to play under, each has tan shorts and no shirt... You'd think they are twins or something!

On Sunday we went to our friends house for a pool party to celebrate their daughter's 4th birthday. Several youg couples with babies showed up and we all had an excellent time in the middle of the controlled chaos. Swimming in the pool turned out to be fun for everyone including the dog, Nelly! Easton and Layla were baffled by the merging of "dog" and "pool". Two concepts they had to combine in their minds to grasp what they saw. 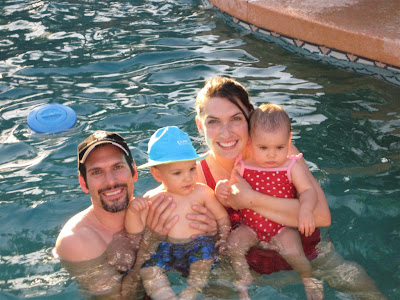 Kendra is very creative when it comes to ways of having fun with the babies. I never would have thought to use sticky notes like that, but Easton giggled the whole time. 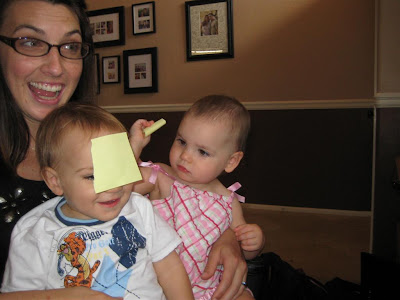 While I was sitting at my computer Layla came over to see what was I was up to. She usually just runs up to the keyboard and starts mashing keys. I was listening to music in my headphones so thought I'd show her how it works. I put the headphones on her head and she just stood there frozen, trying to figure out what was happening. She loves music so it wasn't hard to get her to stand still long enough to take a picture. She is starting to to sing along with the "twinkle, twinkle little star" song and anyone who's been around her knows how strong her lungs are (that a polite way to say she is really, really loud). Combine that together and I think she may be on track for American Idol in the year 2024!