Every morning after the twins eat breakfast Kendra turns on their favorite (and only) TV show, The Wonder Pets . They sing the same songs every single episode and one part says:

This little jingle stays in my head ALL day long and I end up humming it at work or adding the teamwork theme into my corporate presentations. Click on this link if you want to see some pictures and hear how ridiculously humorous they sound. As you can tell, my blog post title came from that theme song too. And here is another source of teamwork: 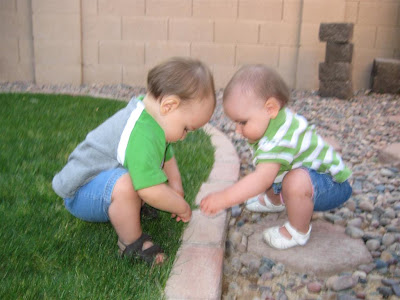 Apparently, the idea Easton and Layla must be within touching distance of each other extends to the backyard. Easton was just picking up rocks and throwing them, which became the antithesis of Layla as she attempted to stack them.

Great Aunt Mary spent the evening with the three of us since Kendra played an early soccer game tonight. We went outside to play in the grass and rocks. At first both babies stayed within the bounds of the yard because the brick barrier was like the Grand Canyon to them.However, once Layla figured out how to step over it, she was "off-roading". 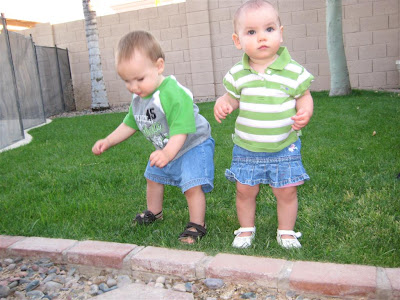 Saturday night we proved we are still spontaneous! We are NOT an old, washed-up married couple who have succumbed to the rut of the daily grind. Great Aunt Mary agreed to come over and keep watch for a few hours so we could get out by ourselves after the babies went to sleep.

I checked online to see what events were happening and BAM! there on the home page was a concert notice of Brett Dennen playing in town. I listen to him on my iPod frequently so I played a few songs for Kendra to hear what he sounded like. She agreed to go see him perform so we headed out the door with no tickets and no guarantees. We showed up before the concert start time and bought our tickets. We had a bite to eat at a restaurant next door and then had a blast listening to the live music and holding each other close. 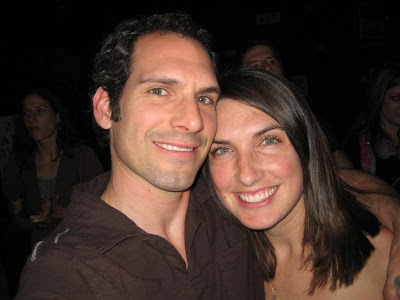 We were literly a few feet in front of him as they performed. This is not a zoomed in picture! We were right there. 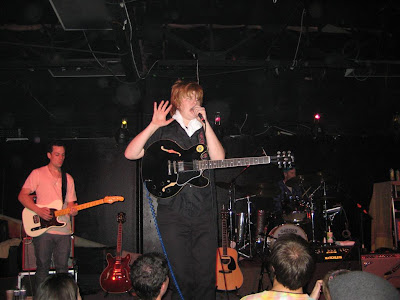 Hooray for staying young and having a good "couple" time together. Thanks to Mary for allowing us the luxury to get out! Anyway, back to the babies...

We went shopping today and since it is already a spectacle where people stop and talk to us about the twins, we decided to have a little fun with it. We raced past the Easter section, but Kendra stopped to play with the bunny ears. We put the ears on Easton and Layla and they loved wearing it. 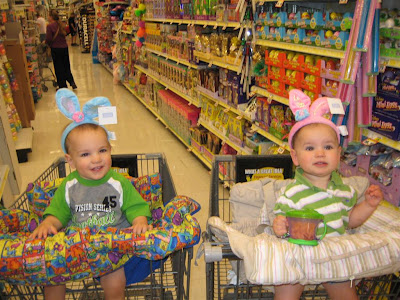 I was excited the ears came in pink and blue. :) Then once we arrived with the groceries back at home, Layla decided to try and fit the entire cantaloupe in her mouth! 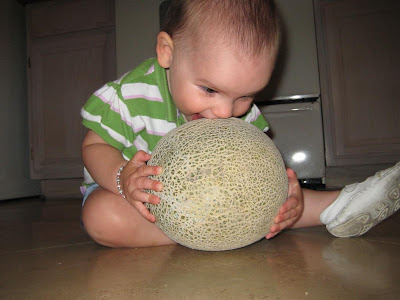 Let me assure you, there is no amount of teamwork that will make that attempted feat successful. I'm proud of her for trying though. She is fearless... Easton and Layla both say the word "hat" frequently and I decided to bring out a few of ours to play dress-up and kill some time. Layla is the most beautifully entertaining baby girl I could ever hope for. 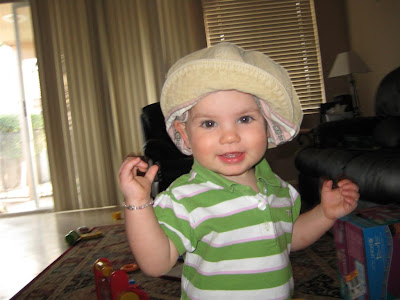 Easton was more into reading his book than playing with hats so by the time I put the hat on Easton and took the picture, he was already trying to take the hat off and get back to his reading. :) 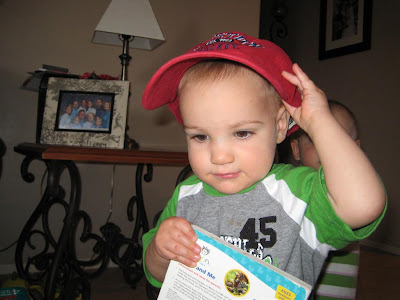 I dressed the twins today and noticed they both had green shirts and jean skirt/shorts. Being the cheesy father I am, I pulled out my green shirt from the closet and we were the green Webbs today. 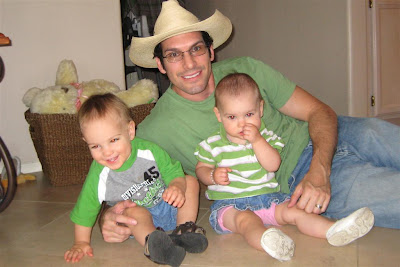 Don't worry, I didn't wear my cowboy hat to the grocery store... that would be silly.

The subwoofer - One final story for a humorous way to start your work week. I had a 12 year old subwoofer attached to my home theater and a week ago as the volume was turned up, I heard what sounded like a blown speaker. After walking around the living room I zeroed in on my subwoofer and as I put my ear on the side of the wooden case, I could hear the "rattle, rattle" noise suggesting it had finally blown out. 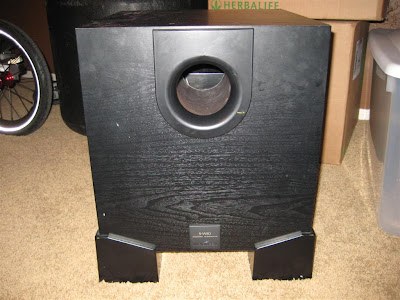 If you know me then you know how much I love to research and the subwoofer was no exception. I spent a few hours reading and shopping online and at Best Buy. I decided on a particular model and found it on Craigslist for about 30% of the price it sells for in stores. Easton went with me and we bought the used subwoofer that day.

After a few hours of taking care of other higher priorities I went over to unhook my old subwoofer and give it a proper burial in our garbage can. When I picked it up to go out to the trash I heard something rattling inside even though it was powered off! Take another look at the picture above and notice how the port hole is perfectly round. I put my hand in the port hole and pulled out a tennis ball and a plastic ball. We had a good laugh about it and I proceeded out to the trashcan to throw the old, broken subwoofer away. I plugged in the new one and it sounds incredible.

Here comes the irony... We were telling the story to Mary and Kendra stopped mid sentence. We both looked at each other as if we just found out we were Punk'd! (Punk'd means, "the recipients of a practical joke" for you old folks). The rattle I heard in the subwoofer was NOT a busted speaker. It was the balls bouncing up and down inside as the speaker played the music!

I ran back out to the trash, dug out the subwoofer, and now I have two subwoofers thanks to Easton and Layla shoving balls in the port hole. Too bad we decided to teach them how to put items "in the box". Anyone want to buy a used subwoofer that smells like banana peel and pasta sauce?