Today the 4 Webbs packed up and joined in the mob of people who attended the annual Ostrich Festival. I was blown away by the size of the festival, the number of people who crowded into the park, and the variety of cool things to see and do. My expectations were really low because I've attended so many fairs and festivals in the past where entertainment was nil. I can't believe I've been here over 13 years and never attended this city-wide event. The one thing I absolutely DID expect was to eat an ostrich burger. Here is Easton and I sitting in the shade chowing on a genuine ostrich burger. yummmmmm... Easton is still intrigued by the beads so here he is once again sporting his Mr. T. starter kit. 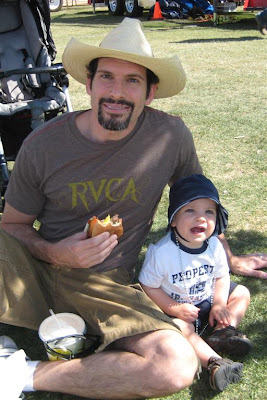 Don't knock it until you try it. Tastes great and much healthier than beef. Here's my best friend, Judson, walking along side his daughter as she rode the pony. 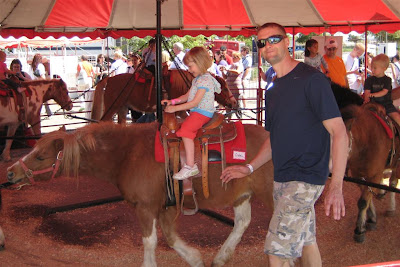 I'm really looking forward to next year when Layla will be old enough to ride the pony herself! There wasn't much to do for 1-year-olds except watch people and pet animals at the petting zoo. So that's what we did! Easton and Layla loved petting the animals and feeling the various textures of their skin. Everything from Emu to zebras to this thing... whatever it is. 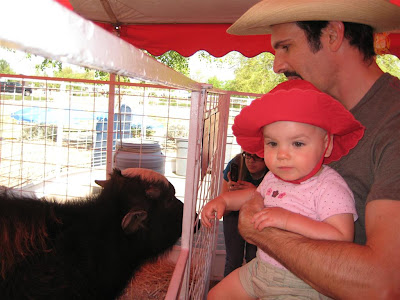 Layla grabbed its horn at one point and I'm very grateful the animals are tame because she was determined to hang on for 8 seconds like a rodeo cowboy.

We missed the demolition derby, pig races, and ostrich riding because our timing was off. I think we have the hang of it now and I'm already looking forward to next year.

Happy Monday to you!
Posted by The Four Webbs at 10:22 PM