After just "getting by" with a few different outfits for Easton and Layla, the blessings from Judson and Heidi (crates full of clothes with various sizes) is the gift that keeps on giving. You'll see the twins wearing a different outfit every day for a while. 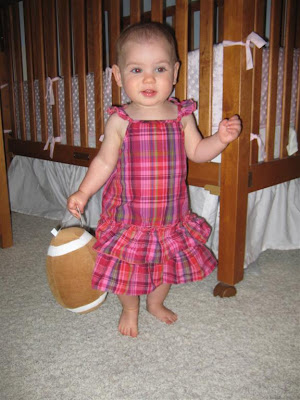 She looks so girly with the pretty dress and so rugged carrying the football. This is the beginning of her well-rounded nature, right?

As for Easton, he was wondering around carrying his stuffed chicken finger puppet. 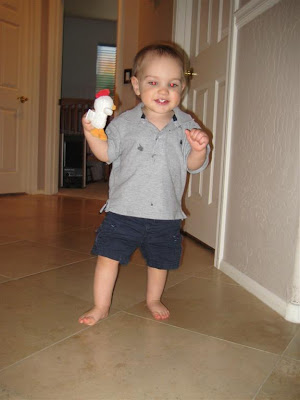 When the two of them passed each other, a very common thing happened. Layla decides what Easton has is more desirable than what she has (even if they have the exact same duplicate item) so she attempts to take his. 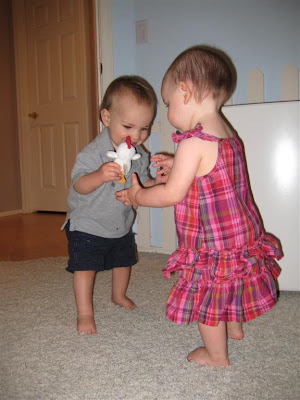 Sometimes Easton is able to hold on by turning his body away from Layla or walking away as quick as his little legs will go. Other times Layla snatches the item from his hands and crying insues. Luckily we were able to distract Layla with promises of sitting in her rocking chair and we ended up with two content kids. 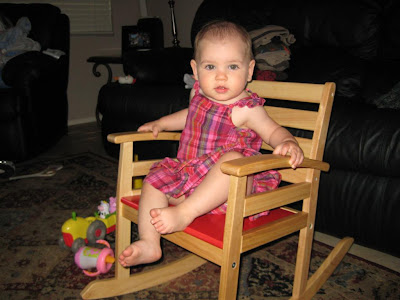 Whew! Do that about 100 times in a row and that's a glimpse into Kendra's day.

The twins are both doing really well developmentally and the title is Spanish for very intelligent. Easton is saying more words every day and just blows us away with his verbal skills. Every airplane (and I mean every one) that comes within earshot or line of sight automatically sends Easton into a repetitive loop where he says, "arpa, arpa, arpa!", which is his word for airplane. Layla is continuing with sign language and has added a few more words to her vocabulary as well. Nothing Spanish yet though... Kendra and I both took Spanish in high school and college. We decided long before having the twins that we would teach English and Spanish to our kids so they will have better odds of bi-lingual abilities.

Don't get me wrong, I DESPISE pressing 1 for English! Every legal resident in the U.S. should speak English and every illegal resident should go back to their own country... forcefully... However, the realities are that Spanish is going to spoken in the U.S. and I can't change it. Instead, Kendra and I agree with the old saying, "If you can't beat 'em, join 'em". So that's what the 4 Webbs are going to do. We have Rosetta Stone and plan to continue integrating Spanish words into every day life as much as possible.

I have a very funny video clip of Easton and Layla wondering around the in the bath room screaming their heads off as the bath tub fills for their nightly bath. But, I've already uploaded a few of those clips before and I'll wait for more interesting video-taped adventures. :)

Thanks Angela! She looks even more lady like with her little pink sandals and bracelet. Now, if we can just get her to grow some long hair...?