It's time once again for me to sort through a pile of pictures and memories. I'll do my best to piece together the past few days and our adventures, but no promises as to their chronological order.

We'll start back on Thursday when Kendra took the twins to the farm. Here they are in front of the donkey. You probably can't read the sign posted on the donkey stall next to Layla, but I thought it was referring to our twins. It says, "We are nice, but we can bite! Please be careful!" 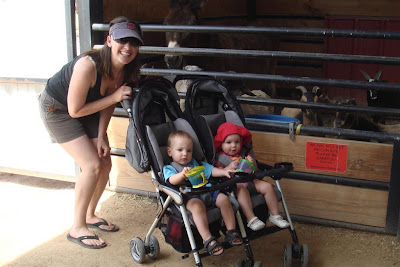 and here's one other picture of Kendra feeding a big camel while the twins watch with amazement. 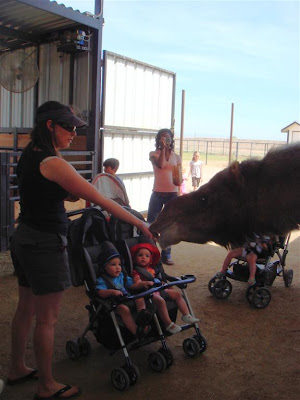 As you can see they had a blast with the other mommies and kids wondering through the farm. I hope that gives the "old MacDonald" song a new meaning for them.

On Friday and Sunday night Great Aunt Mary (GAM) came over to hang out with the 4 Webbs. They are starting to get more used to her all the time and now when she comes in they smile and head for the front door to greet her. There are only a handful of folks in our life who get such a warm greeting from the twins so we are glad for them to get to that level of comfortability. Here they are before bed time smiling as usual. 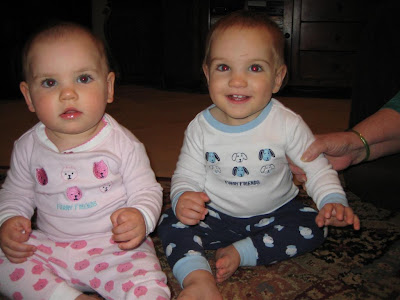 Layla has her pink cat pajamas and Easton has his blue dog pajamas. Apparently somewhere it is a written rule that cats are for girls and dogs are for boys... I wonder where that came from?

We went to the park a couple of times because this weekend we finally had a breeze strong enough to keep our kite up in the air. As you can imagine, it flew much better when Layla wasn't sitting on it... 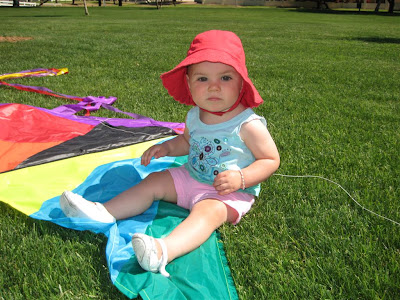 Once mommy had it airborne, Layla ran over to help hold the string. 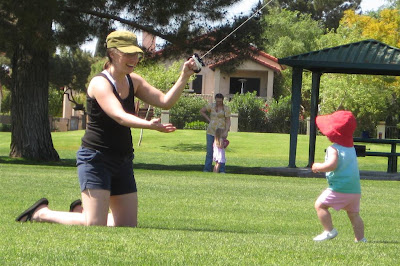 Easton and I just hung out in the grass and watched Kendra run around trying to keep it airborne and Layla chasing her around. 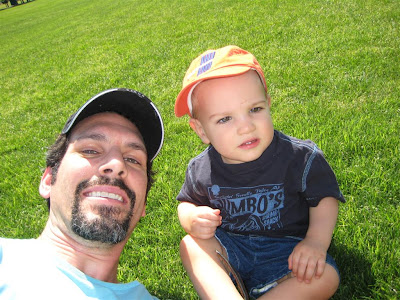 I've tried to put my hat on Easton's head several times in the past, but it fell down over his face when he moved. My engineering mind thought of a solution... Why not use his hat to prop up mine? Viola! You can see his hat under mine and it made Easton feel like a big boy to wear daddy's hat. 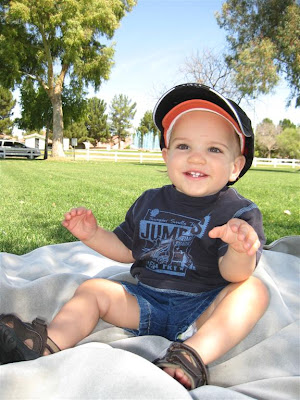 Then we went to our friend's house for an evening BBQ with other couples with babies. Here is what dinner looks like when 4 families with babies get together. Our twins are the two on the far left: 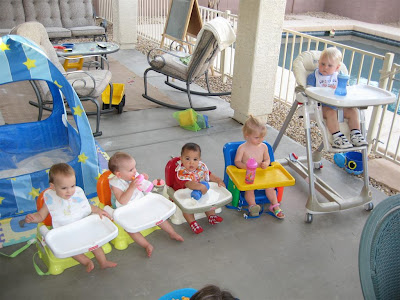 Later that evening a child (who will remain nameless) found the pitcher of lemonade and dunked their whole arm into it. The mothers were inside so only the fathers witnessed the humorous scene. All of us just shrugged our shoulders and agreed it shouldn't be thrown out because we'll all still drink it! If someone who had never been a parent saw that, their reaction would have been very different. The 4 Webbs had an excellent time at the BBQ and I told Kendra I would happily do that EVERY Saturday night if it were possible.

Easton hugged the beach ball and tried to bite it a few times. Ignore the scratch on his forehead... Edward Scissorhands is at it again. Time to cut those finger nails. 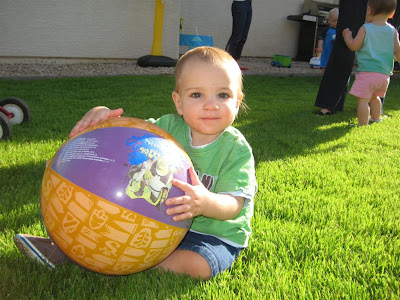 Layla kicked the beach ball. She's getting really good at kicking a ball around and will do it on command. Kendra's starting early with her to be a great soccer player. 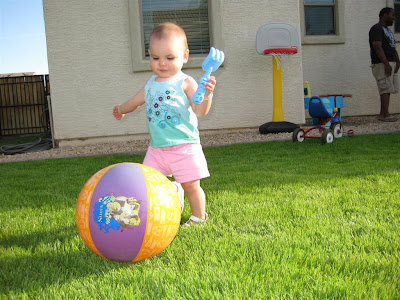 Have you ever heard of a "water table"? No, not the torturous water boarding... It's a plastic tub on stilts with water and squirt toys in it. 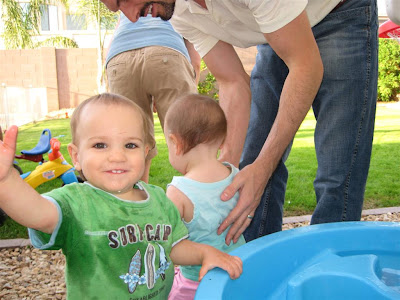 or as I call it, the "automatic kid washer". Easton was soaked to the bone after splashing around so we took his shirt off to dry and let him wonder around like a muscle man. 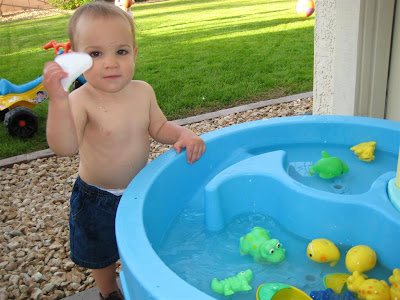 Easton is learning new words every week and never ceases to amaze us. At some point his vocabulary will be so large we can't keep up, but for now he has these words down:

I better stop here for the night so I have something to write about tomorrow. :) Today held it's own adventures of success at the church nursery and another trip to the park for more kite, duck, swing routine to wear them out.

We had so much fun with you guys and are still amazed we all got to sit and eat dinner together at one time! If you get a chance will you email me your pic of all the kids eating together--its too funny!

We had so much fun as well! I think we should make our get togethers once a month!!!