Walk in the Park

The 4 Webbs had an exciting weekend filled with more seemingly mundane achievements that had us clapping and cheering for the accomplishments. Layla stands up, walks several steps, and sits down without any assistance at all. She was hanging on to daddy's robe and occasionally pulling my chest hair as we lounged around the house on Saturday morning. 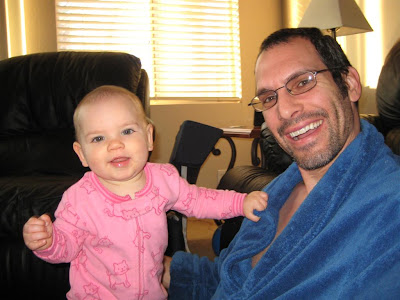 I can't even begin to describe how excited I was on Friday night when I looked at my calendar for work (as I do every evening) and realized the next day was not a work day! Not because I could sleep in on Saturday... Those days are over and I already mourned the loss of sleeping in. However, I was excited for the chance to spend time as the 4 Webbs. Here we are at the park taking a break from roller blading with the babies. 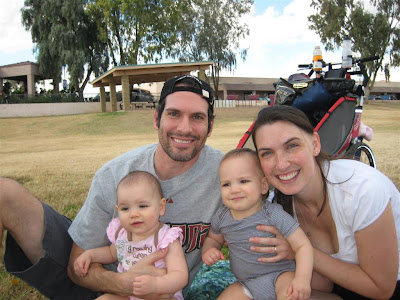 Our friends Brendon and Danielle rolled their baby, Daniel, along side us and we spent the afternoon soaking in the outdoors and enjoying their company. At one point both moms were changing a baby on top of the picnic table at the same time and we noted how "normal" it was and how glad we all were to be around each other to feel comfortable with moments like those. younger people or those without kids would have been really creeped out by the awkwardness, but we just continued our conversation as if no babies were even present.

Daniel is 6 months older than our twins so watching him is always insightful to see what I can expect 6 months from now. He was walking around as we ate our picnic lunch and climbing on park benches with all the balance and coordination of a normal person. Also, Daniel would inquisitively say, "Da Da?" once in a while when he wanted to make sure Brendon was close by. I can't wait to hear Easton and Layla calling for me by name. They occasionally say Da da da da, but I'm certain they aren't calling for me, but rather making random noises.

Speaking of noises... Easton is really stepping up his frequency and volume and breadth of babbling. You can even see it on his face as he was proudly showing how he can put one block on top of another. 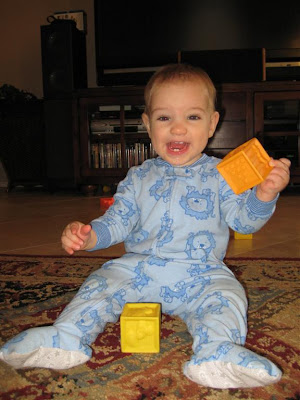 Here's a video of Easton showing his new trick of maneuvering the walker. He's really improved his core strength and now he walks all over the house with the assistance of his walker.

Layla on the other hand continues to go full speed ahead into whatever wall is directly in front of her. She doesn't get the concept of repositioning the walker to go in a different direction so she usually just gives up and crawls away. 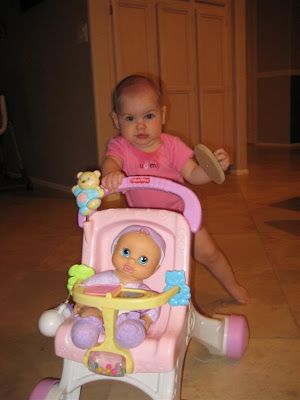 There was one other picture that accurately describes the twins. They were both sitting side-by-side and as I steadied the camera to take the picture, Layla lunged forward (like she always does) and attempted to tackle me and the camera. 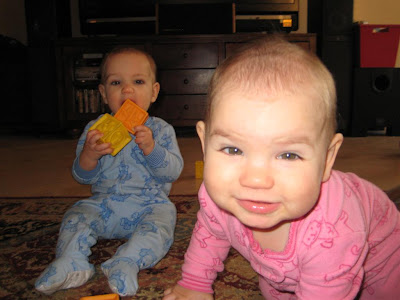 Aunt Mary was kind enough to spend the evening with me and the twins because Kendra went to play soccer during our nightly happy hour between 6-7 PM. We had a big time giving the twins their bath and reading books. By the time Kendra arrived home it was obvious we wore the babies out because they went straight to bed without a peep.

That's exactly what I'm going to do now... straight to bed. Good night!
Posted by The Four Webbs at 9:48 PM