Hope your week is going well! The 4 Webbs are all feeling better. Not quite 100% over the sniffles, but at least mommy is better. Easton and Layla require the occasional nose wipe and Easton still has a scratchy voice, but other than that we're doing great. Last night we exerienced a rare multi-hour sprinkle of rain and that made for good sleeping weather. Easton woke us up at some point and nursed. Since we don't have a single clock in our bedroom all I remeber was the darkness of night and being grateful mommy is the milk provider. At least for the next two weeks anyways...

That brings me to my next round of coherent thoughts, which is: thinking beyond one year. As the first birthday approaches for the twins Kendra and I are starting to think and talk about what the next year will bring. For the previous 11 months + 9 months of pregnancy all we could focus on was getting through the day and maybe thinking one day ahead. We were essentially running a marathon and staring down at our shoes to see what the next step would be. There wasn't time or desire to look ahead to see what twists and turns or ups and downs the course will bring.

We continue to think about and plan for the future of the twins, but lately we throw in an idea for ourselves or us as a couple also. We're finally starting to think about two day getaways together, annual trips with friends, and family vacations. You know those bumper stickers that say, "I'd rather be ____" (fill in the blank). Well, my bumper sticker would say, "I'd rather be mountain biking in Moab!" I hope to go there again in 2009. Here's a picture I look at often and day dream about riding the slick rock single track. Back to reality... This morning I took a short video clip of what I wake up to every morning: Easton and Layla standing in their cribs babbling and laughing at each other as they wait patiently for us to get them out and fix breakfast.

I find the twins' opinion of me is greatly influenced by whether I have a banana or not. For example, here is Kendra sharing her banana bits with the babies. During these few moments I could be wearing a clown outfit and honking my nose, but the babies wouldn't even glance my direction. 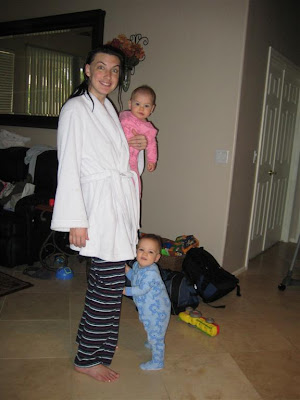 Have a great weekend!
Posted by The Four Webbs at 7:31 AM