My attempt to capture our two cutest babies in the world sitting next to each other turned out to be just another picture of Layla charging the camera like a rhino. 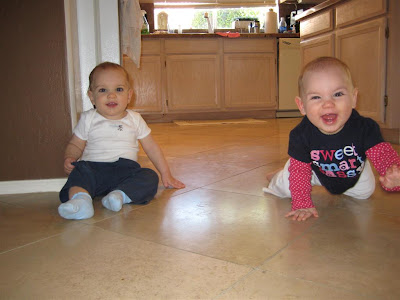 She gets so excited when the pre-flash lamp shines she can hardly contain herself. At least I get a chuckle when seeing these kinds of pictures and an "E" for effort...

And now for my latest father tip based on my ever-evolving learning from this thing called parenthood:

Fact: Babies will be "teething" for the first two years of life. It's not a one-day or one-week or even one-month event, so get used to it.

Kendra interprets mass amounts of slobber, occasional fussiness, and puffy gums as teething. I call it childhood now that I've been through a year's worth of it. I say that because slobber and fussiness and puffy gums are a part of every. single. day. without fail. Maybe it just makes her feel better about the situation if she can put a label on it. The first four teeth forged their way out of the gums fairly quickly and now I have two rabbits. Apparently the next stage is when the rest of them start popping though one at a time. with daily checks of their gums and still nursing (ouch) I'm certain Kendra is more in tune with which teeth are starting to show through.

I'm a little short on pictures from the past few days, but i'll drum up some more shortly. Until then, i'll fill in the space with my continued thoughts on the One Month to Live challenge I'm involved with right now. As a true example of how I'm truly changing as a result of the new perspective on life I offer the short conversation about Kendra's hair from today. Keep in mind this is what Kendra's hair looked like when we met: 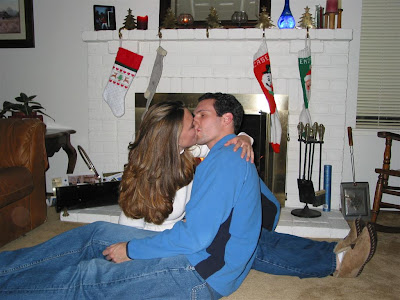 Obviously I like her long hair, but I've never defined my attraction to Kendra based on the length of her hair. Anyways, here's what living as if you have one month to live looks like:

Kendra (out of nowhere): I scheduled an appointment to get my hair cut
Bronson: OK
Kendra: I mean REALLY get it cut... like... really short. all one length at my shoulders.
Bronson (realizing she wants my opinion): Alright, that sounds great. I'm perfectly fine with you cutting your hair short. I mean, if I actually only had one month to live, would I care how long your hair is?
Kendra (after a short pause and contemplation): OK, then I'll do it !

I honestly don't mind her plans for short hair and in a small, insignificant way I was able to understand the "freedom" they talk about when you consider living as though you only have one month to live. I'm a lot less concerned with the little things in life.

Using nose hair trimmers is now a daily ritual. Not so long ago I could get away with every few days, but lately if I skip a day I end up with. well... you get the idea.

A horrible student driver cut me off today and I realized the kid behind the wheel was BORN after I graduated high school! Wow. that's scary.

I've had a few grey hairs in my temple since I was 16 years old, but now the whole side of my head is starting to become overrun with grey hair. And when I let my beard grow out for a week I discovered my chin is more than half grey.

Talk radio. I just love talk radio and can't get enough of it. Even if I disagree with the bonehead talking or verbally correct their uneducated stabs at a coherent statement about the economy, I still listen. Just a few years ago when I climbed in my friend's truck to go adventuring he had talk radio blaring and I chastised him until he turned the station to some good music. Now I find myself frustrated that we only have two decent talk radio stations and they have commercials at the exact same time.

To close out the getting old pity party with a happy note, I try to consider these two things:

"I'm not going to waste my days trying to prolong them." (to me this means I shouldn't exercise my life away trying to tack on another two years to the end of it)

For what will it profit a man if he gains the whole world and forfeits his soul? (to me this means I should focus less on attaining stuff while taking over the world and more on becoming the man God wants me to be.)

Speaking of attaining stuff... We went window shopping for houses this evening. I call it window shopping because we had no intention of actually buying anything, but we're close to figuring out what we want in a house so we'll know it when we see it. We both agree on the most important criteria so that's a good first step. If we see the right house at the right price we may be tempted to jump in sometime. Don't worry... Obama will make my mortgage payments if I get in over my head (cough, cough).

With that in mind, I'll close with these two thoughts:

1. If you want to make God laugh, tell him your plans.
2. Life is what happens while you're making plans.

I can tell you're growing older, not by the gray in your hair, but by the wisdom in your words. You inspired me today. My challenge is remembering that I can die with organized spice cabinets and neatly folded laundry or I can live and play more.....love ya, joanie

thanks for the compliments joanie. that means a lot coming from miss valedictorian and the world's greatest singer of Germs the Invisible Dog. :)