Kendra's parents and her brother arrived on Saturday as scheduled! The twins have been wearing us out as usual and now Oma and Opa are also having a hard time keeping up with their high energy. We see them almost every day through Skype, but it's a whole new ball game since they can't just click the "hang up" button to regain peace and quiet. We are both very thankful they were willing to spend their week off from work with us here in AZ.

Easton and Layla are up to their same old tricks and have added several new advancements to their credit. Oma and Opa started helping Easton right away with his ability to stand while holding on to something. For whatever reason he was ok being upright on his knees, but when he would stand on his own it would end in tears and he needed help to get back down to crawling. All of that is over now and in two short days he's gone from scared and unsure to pulling the "one hand on, one hand off" trick. 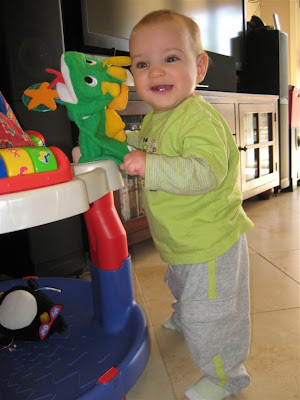 Oma and Opa were brave enough to ride our bicycles and tow the twins in the Chariot while Kendra and I skated along side them in rollerblades. We exercised our way to the duck park and enjoyed the shade of a tree next to the pond. Our duck herding skills were terrible and we only enticed one lone mallard to come and eat our bread. However, the smiles were plentiful and we made the most of it. 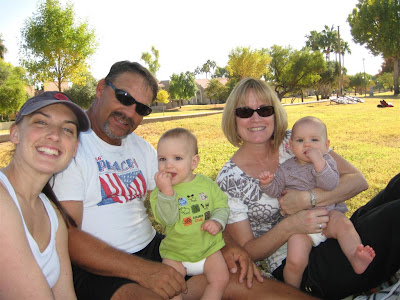 While we were there I captured a video clip of Layla raking her sore gums across the lid of a water bottle for comfort. Yes, it's finally true... Layla and Easton are both teething! For real this time. No "boy who cried wolf". :) Layla has her first top tooth showing and one is visibly ready to poke through any day. If you have the volume up loud enough, you can here the ridges of the bottle as she runs it back and forth across her teeth. Be warned though! She talks VERY loudly and it will blow your ear drums out if you have the volume up too loud.

Last night we all went to watch Kendra play her last soccer game of the season and here's the whole Burgess clan minus younger brother Logan who is still in CA. 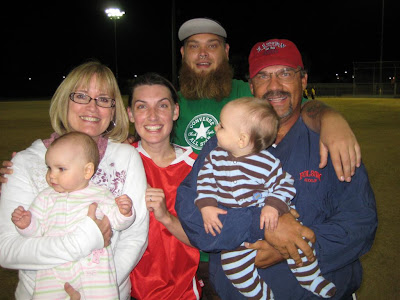 The night was chilly so we brought plenty of blankets and clothing to keep us all warm. Here you can see Easton smiling big and Layla getting cuddly with the covers. 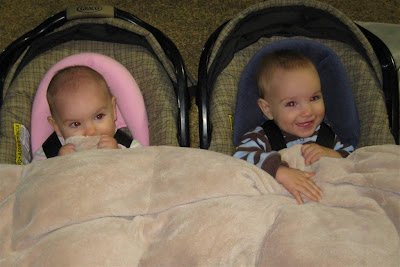 I'll have to get some pictures of their new jungle gym play Oma bought for them today. It's like an exersaucer only instead of sitting in the middle, they just pull themselves up to play with the plastic toys hanging off it. Layla is still a few stages ahead of Easton (as we expect) when it comes to balance and core body strength. One of Layla's new tricks is called the "one-legged prarie dog". 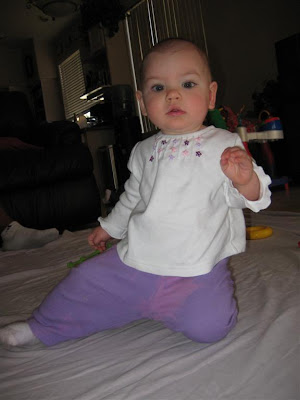 I know that's a ridiculous name, but what else would you call that? She gets up on her knees with nothing around her, then kicks one leg out to the side and bounces up and down on the bent leg. I'm sure it will be a cool new dance some day...

Oma and Opa are having almost as much fun during bath time as the twins are. Even after a full day of teething, almost no napping, and playing all day Easton and Layla both seem to still have plenty of energy to splash around during bath time and give a big smile for the camera. 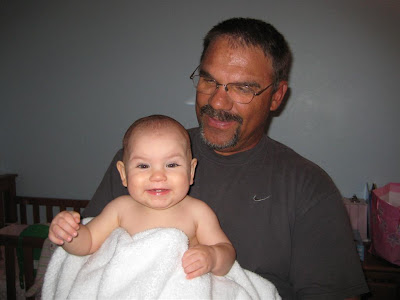 I'll be taking off some days from work to enjoy family time and hopefully have more time to blog than the past couple of days. We're so busy having a great time together that it is hard to find the free time to share the experiences. Don't worry... we all make time for what is important, including myself.

Have a happy day and stop by again soon.
Posted by The Four Webbs at 8:41 PM