Kendra is off to play soccer again tonight and I'm glad she is so passionate and excited to do something active. She's convinced herself the "minor sprain" of her ankle in last night's game is already healed. She knows how much I am anxious about potentially hurting herself, which would result in you-know-who taking care of the babies and her. I try not to live by fear, but we all have our weakness and Kendra getting hurt would throw a real curve ball into our daily routine. Pray for safe soccer!

I'll start off this post with a small glimpse into what I can only describe as increased mischief now that Layla and Easton are getting mobile. 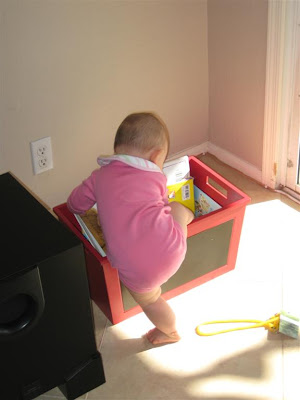 There's Layla pulling herself up to the book box and then stepping INTO the box! She stood there like this for quite a while trying to figure out what to do now that she has one leg in... Easton still is not convince he needs to do anything more than commando crawling, but he's starting to get up on his hands and knees and rock back and forth. He'll get there soon enough. Last night while Kendra was at her game I had the privilege of getting the twins ready for bed time all by myself. I put Layla and Easton in their sleep-sack pajamas and thought they would be immobilized somewhat as they crawled around. I was really wrong about that! Here's more mischief: 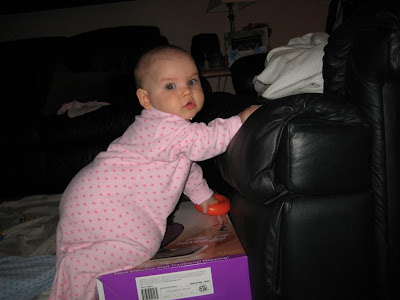 Layla pushed the box up against the couch, pulled herself up onto the box and then tried to use it as a step to get up on the couch. I was amazed at her ingenuity and frightened by the thought of Easton and Layla putting their brains together soon for a coordinated effort in exploration.

The latest change is possible teething for Easton and dragon noises from Layla. Easton's gums are puffy and he drools more than normal, but I've heard this same "teething" theory every other day for months now and still no top teeth. Layla's voice is extremely loud and in the bathtub it echoes and pierces our ears. So much that we cringe and hold water toys up to our ears to block the noise. She's also started this dragon noise. we haven't caught it on video yet, but here's the best way i can describe it: You know when you go to the dentist and they put that vacuum tube in your mouth? OK, you know the sound as you fight with it to save your tongue from being sucked into the vacuum? She sounds like that only really loud and long. I just missed one of her dragon noises, but caught this picture of the twins loving on mommy while hanging out on our bed. 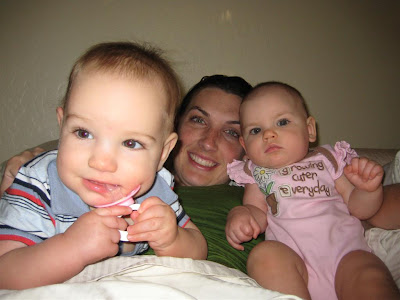 Kendra has continually read to the twins since they were in her belly. Layla gets more intensely interested than Easton, but he loves a good story time. They both are interested in drooling on and destroying the books almost as much as hearing us read them. Here's a picture of the twins holding their own book and pretending to read: 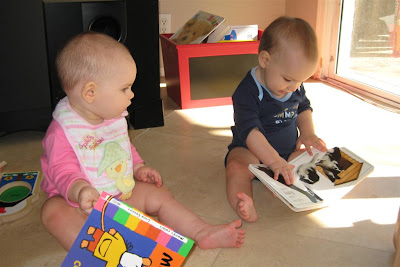 Tomorrow is election day. Easton and Layla don't care... The highlight of their day will be mushy banana and the lowlight will be poopy diapers just like every other day. I envy their lack of responsibility! See you again soon.
Posted by The Four Webbs at 7:36 PM

Hey, Bronson & Kendra!
I sure do miss you and the babies! I enjoy looking at the pics - they are such a good diversion from the election anxiety.The babies' teeth will come soon and then more teeth will appear as time passes. Looking at Eli, Silas, & Daphne and all their changes have happened so quickly. Hope your day goes well. Kendra, call me!
Love ya gobs,
MOM