Another day, another dollar for the 4 Webbs and things are moving right along. The routine is starting to set in, for better and worse, and we are just working through the week waiting for my Ma and Pa to get here on the 22nd. I call them Ma and Pa because I'm from the mid-west and it differentiates them from Kendra's parents who we call Mom and Dad. We've called each other's parents by these names since the day we were married and it's nice to have two sets of great parents that we love so much.

Today Kendra wheeled Easton and Layla over to the living room where the computer is so Oma could watch them eat and sing to them over Skype. For some unknown reason, "biter biscuits" exist and i'm certain whoever invented them did so as a practical joke on mothers. In case you're not familiar, biter biscuits are a self-described finger food that are supposed to be big enough that babies can get their hands around them and tasty enough for them to eat without being actual cookies. When baby drool touches these biscuits a chemical reaction takes place and the whole thing turns to sticky mush. The inventors must have sat around and said, "what is the messiest food ever created by man and how can we make it sticky and crusty as it dries?" Here is Easton and Layla with their first attempt at biting the biter biscuits: 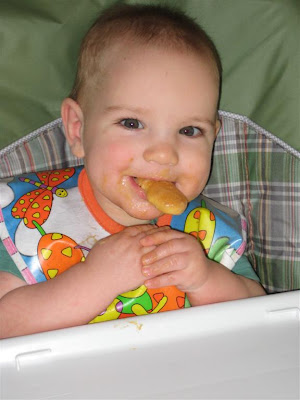 You can see Easton got the hang of it pretty quick. Somehow he was able to keep it out of his hair. 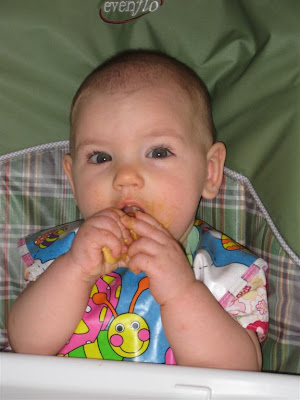 Not that keeping it out of their hair made a difference. Once they were done smearing it on their arms and face we took them out of the high chairs and straight to the tub for washing and splashing! Bath time is always fun for them and now we have a bathmat that sits in the tub and keeps their tiny butts from sliding around all over the place.

Layla crawled from the living room through the kitchen and into the front room all by herself! I think that was her longest distance of crawling so far. Good thing I was by the front door to stop her otherwise she would have continued crawling around the neighborhood until she found Mommy, who was out jogging. Easton has a little blister on the top of his foot from crawling. He's really getting used to the idea of being mobile.

Taking a picture is getting trickier now because as soon as the camera comes out and I move into position, Layla gets curious and starts charging towards the camera with the bright lights and dangling strap. 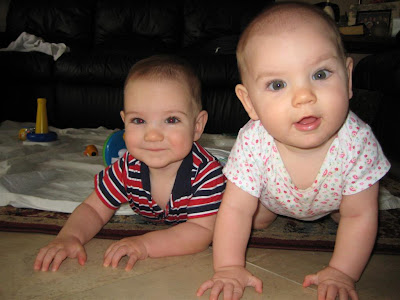 The two of them were at about the same distance from me when I started to take the picture, but by the time it finally took, Layla was already charging me like a wild animal. What you see here is typical of how they spend their time. Easton doing the army crawl and Layla up on all fours doing the bear crawl.

The rest of the time we find Layla propping herself up using Easton as a stepping stone like this next picture where she climbs up over him and rocks back and forth. 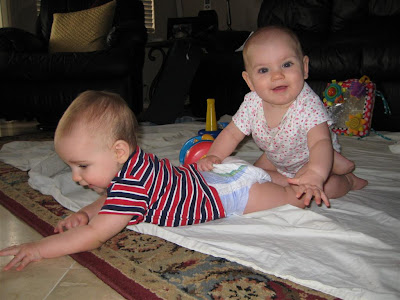 That about does it for current progress of what the twins are up to lately. The 4 Webbs are going to "Kid to Kid" on Friday so we can barter. We have two gigantic plastic tubs full of clothes and are hoping to trade them up in size for some other clothes that actually fit since they have outgrown most of what we received from the extremely generous showers and gifts.

I'll finish the blog today with a clip of Easton and Layla laughing... at Kendra... Now you can see what she does with her day while I'm away at work! It may appear she's borderline crazy, but you would be absolutely amazed at the lengths we go through for a few laughs from the twins. Kendra's cinematography gets better during the second half of the short clip. :)

Have a great day and we'll see you again soon!

Hey Bronson and Kendra!
Thanks for putting a smile on my face upon hearing and seeing Layla giggling! I guess I better bring my running shoes when we travel there so that I can help keep up with those fast crawling babies.
Love ya gobs,
MOM