Greetings from the 4 Webbs!

I'm feeling much better and apparently I had a bad case of allergies from all the wind outside and heavy cleaning inside our house. We let the cleaning chores get behind and Kendra felt a little overwhelmed so we tag-teamed every room in the house until it was done... except the garage... we'll leave that for a rainy day (and luckily we live in AZ so it probably won't rain again for a couple of months).

Anywho, we've been having tons 'o fun with new toys, new clothes, and new tricks. The party never ends. Here you can see Easton and Layla in awe of the "great toy box from heaven" Layla is old enough to see inside and pull out whatever toy is easiest to grab. 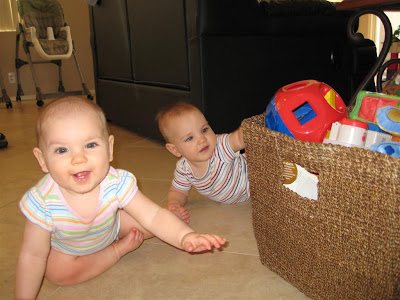 and one more from that photo shoot that I just can't resist posting. I call this picture: "When you're happy and you know it, drool on the floor" 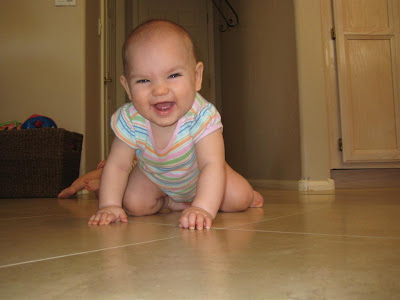 As the fairy tale goes, Hansel and Gretel left a trail of breadcrumbs to find their way home. Layla, on the other hand, tends to leave a trail of drool wherever she goes. We just follow the slober trail to find where she's located in the house. She's getting stronger by the day and able to pull herself up on the couch, her crib, the exersaucer, and just about anything else that will support her. She's managed to figure out that falling backwards hurts so at least she has the common sense to let go gently and squat down to the ground using the cushion of the diaper to break her fall.

Ladies and gentlemen... It's the great Easton and his many talents!

He can drink from a straw! 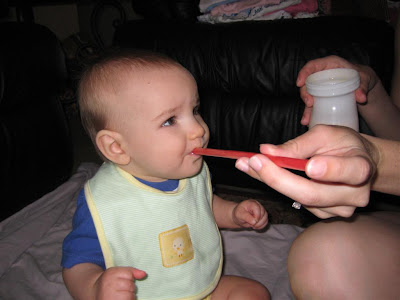 Ok, so he's not too excited about the straw idea, but the tasty banana Jamba Juice inside made it all worthwhile. He can pose and look cute enough to be the poster child for baby soft toilet paper: 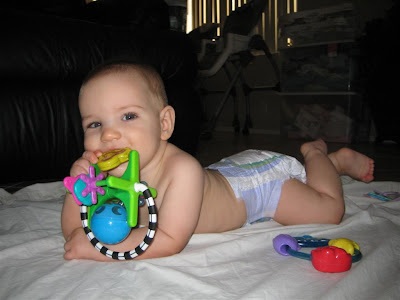 He can sport a fake tattoo on his forehead by lying on his toy while sleeping (notice the red imprint where he slept face-down on his rubber toy). He also has the "I just woke up" look, but that's not really a talent because we all have that at some time or another. 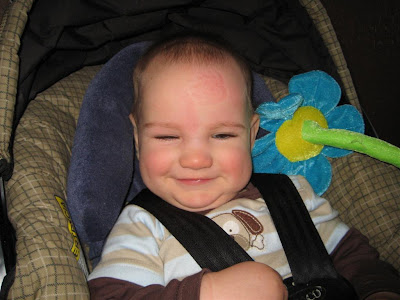 And for the grand finale! It's Easton shaking his plastic egg with little metal BBs inside. He's a rock star in the making. I've been coaching him by saying, "I need to hear more shaker!" in memory of Gene Frenkle and the famous SLN skit about "More cowbell" with Will Ferrell.

He had his first concert as a one-man-band via Skype for Oma, Opa, GG, and Great Aunt Judy. He was an instant hit with lots of laughs and smiles from both sides of the camera.

Not to be outdone, we have a picture of Layla with her shaker egg too. She is equally talented when it comes to musical creativity. She looks so cute and cuddly with her bib, pacifier, and pretty eyes! 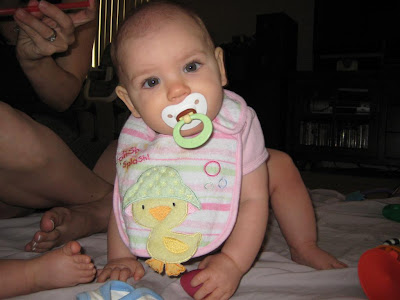 It's gettin' might cold down here in the winter wonderland of the desert. We hit a night time low of 50! Brrrrrr. You know what that means... time to break out the terrycloth robe and sleep sacks for the babies! The twins slept very well in their sleep sacks and they feel like really thick felt material that is very soft. You think I'm kidding? We're lightweights when it comes to cool weather so here's your proof: 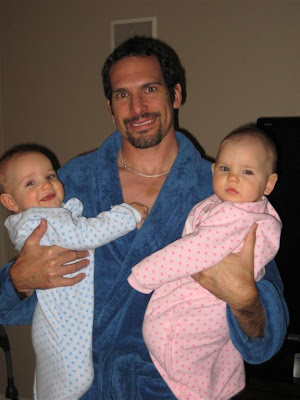 Don't worry... we won't be packing our shorts and flipflops away just yet. It's supposed to be back up into the mid-90's for day time highs by tomorrow.

Come back again soon for more fun with the twins!
Posted by The Four Webbs at 7:39 AM