The Secret is Giving

The twins began learning spanish already in kindergarten.  The first words Layla attempted to teach me were: amiga and amigo.  how fitting for two of the best friends to come from a single womb.

On saturday morning we did something together as a family I've been wanting to do for a long time.  last year I took the twins to organize donated food and give it to the less-fortunate.  Kendra didn't join us last time, but the 4 Webbs did it together this time.  We met at the church and all of us helped bag up the bread, produce, and cookies.  Easton wasn't "feeling it", but we had a few talks and he eventually changed his attitude. 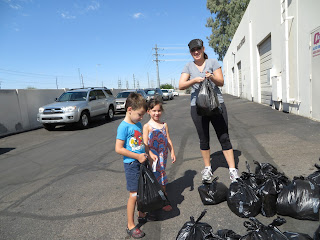 After the food was bagged and loaded the participants split off in groups to go give it away.  We went with two gentlemen to an apartment complex and a trailer park.  We popped the back hatch and went door to door inviting people to come out and get free food. 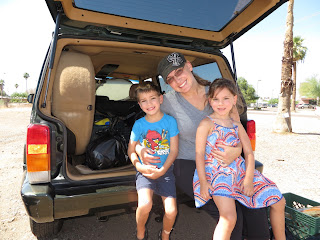 While this was going on we explained to the twins how some people don't have food, toys, or love.  It was difficult for them to grasp the concept since they've never gone hungry for more than a couple of hours at a time.  A mentally and physically challenged girl played in the dirt next to her mom who was talking on her cell phone.  Kendra had the great idea for Layla to give the girl her sunglasses.  She has four pair of them.  Layla said, "but these are my favorite!  they have sparkles."  I explained that when we give, we give our best, not our leftovers or junk.  The twins had a few "ah ha" moments of appreciation and gratitude, but most importantly they experienced giving on a real level.  They gave their time, the church's donated food, sunglasses, and love. 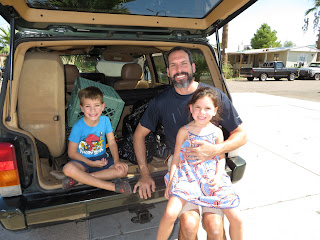 If there is one thing I want our family to be known for it is unconditional generosity, which is giving without expecting anything in return.  The more we give, the more we prove we can be trusted to give more, and the cycle continues.

I uploaded the video from the first day I dropped them off at Kindergarten (Friday of their first week).  They gave me kisses and off they went; confident and comfortable.

This next picture is one of the funniest situations I've ever had to leave the room so as not to laugh out loud.  We invited a new church family over for lunch and swimming on Sunday.  Their two girls are shown here with my princess Layla.  When I asked them what princesses they were Layla said, I'm Merida, Chloe is Rapunzel, and Raylynn (the smallest one) is an Ewok.  I almost choked on my spit. She nailed it with her description and luckily the assignment of characters was not said meanly or taken with any malice.  They just stood there smiling and nodding their heads. 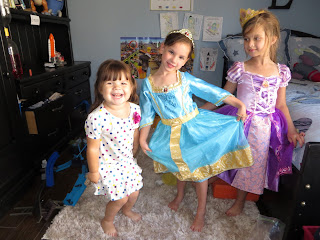 We went for lunch last week with some other families.  Most of us have young kids who sat together.  Easton and his friend Zander found alternative uses for their kids meal bags... hats.  The peer pressure and group think concerns are raring their heads way earlier in this parenting role than I expected. 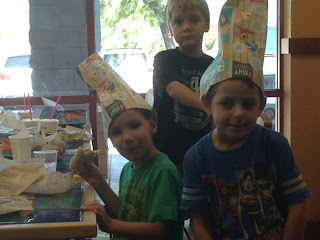 I'd love to find a book called "what to expect with your kids go to kindergarten" because I am already astounded by the stuff that's coming up (good and bad) as a result of them entering the educational system and this fun age of kindergarten.