Friday night I had to break the bad news to Easton.  He's excited to go to school Saturday morning, but I had to tell him he doesn't get to go back for two days.  The disappointment was visible on his face.  This makes me the happiest parent of a kindergartner that ever lived.  Easton and Layla both have an excitement for school that is rooted in our parenting choices.  We chose to prepare them by describing the classroom experience as interesting and awesome.  They start each day with high expectations and that's their perception of school.  I know our job is just starting, but if these first two weeks are indications of what is to come then I say, "bring it on!"

Easton was comforted somewhat when he figured out Saturday was the birthday party for his friend.  These church kids are quickly become very close friends and I love to see it. 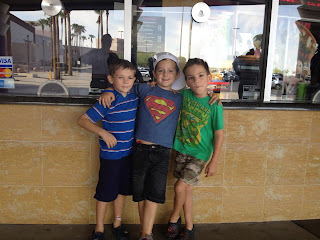 They went to see the movie "Planes", which I know will be right up Easton's alley.  I expect a fairly detailed description when we see him after the party is over.  It's Arizona in the summer time and there is an excessive heat advisory in effect for the next 48 hours so the possible Birthday party options are limited. 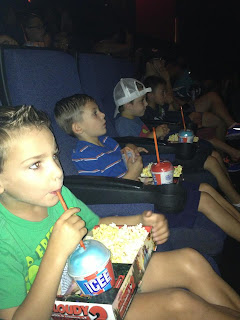 Unless you're a mountain biker who just bought a new bike.  Then it's a perfect time to go for a two hour ride in the blazing hot sun.  Luckily I conned a few buddies into enduring the heat with me.  When I pressed my helmet against my forehead, the squishy padding poured sweat onto the dirty trail like a faucet.  Well worth it! 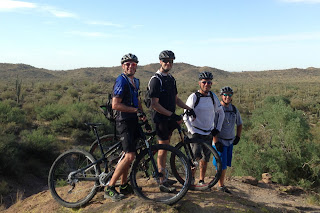 I've been watching Craigslist for a good deal on a used bike for the past several weeks with no real intention to buy.  then I ran across a half-priced deal on a virtually new dream bike.  I went to test out the bike and was greeted by a guy in a wheel chair in his garage.  He bought the bike new and then tragedy struck three months later.  He wrecked on another mountain bike he owned by going over the handle bars and hitting his head on a rock.  As a result he is permanently paralyzed from the waist down.  Talk about a sad story...  Sure made it difficult to talk him down on price, but I know a good deal when i see it so there wasn't much need to try.

It wasn't the wisest financial decision I've ever made, but after talking it over with Kendra I paid cash for it.  There is no other hobby or activity available here in Arizona that brings me as much pleasure as mountain biking.  At least, that's my justification for spending such a big chunk of change on a silly bike.

Anyway, we are preparing for Logan's wedding.  Kendra is on a crash diet and exercise regimen even though she already looks great.  I decided to shave my beard.  This is what I sent to the bride-to-be in a text message:

Bree, you are about to become my sister in two weeks!  Thank you for allowing me to be in your wedding.  You will have to live with my mug in your wedding party pictures for the rest of your life.  The wedding is about you, not me.  I consider your desires and happiness above my own because I realize the wedding pictures are important to you.  The question is: What facial hair do you want me to have on your special day?  Beard, goatee, or clean shaven?

She said shave it so here's the new (old) look! 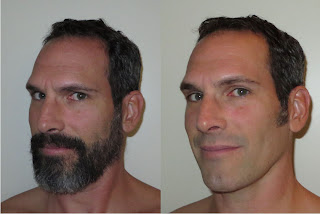 While Easton is with his friends we invited the birthday boy's sister to come hang out with us.  Kendra set up a princess tea party complete with personalized place mats and real flowers.  I told the girls to give their best princess smile and this is the result. 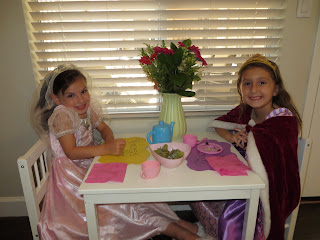 Dancing in the living room followed, then swimming and lunch.  The atmosphere certainly shifted when we traded Easton for a second princess!  Having two girls would have been fun, but I like the balance of the Webb house when Easton is around.  I've been taking selfies for a decade, which is before they were even called selfies.  This used to be just me taking a picture of myself because usually I was alone.  Then came Kendra.  This is the first known self portrait of us two. 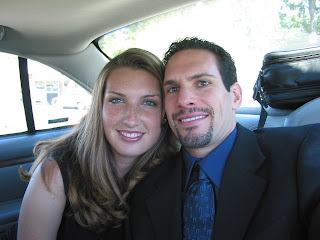 Times have sure changed, but the fulfillment in life is even greater as a family.  I call this picture "Smarty McFarty". 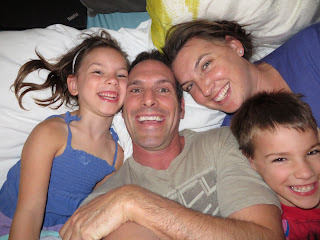 We are very cautious to avoid name calling and teasing.  We expect (and get) encouraging words and comments toward each other and everyone else we meet outside the home.  However, There are occasions to bend the rules and not be such a stick in the mud.  The twins affectionately call me "Captain Underpants".  I have no idea why that's funny to them, but the name came from Wreck-it Ralph a few months ago and just keeps coming up.  Kendra called Easton "Smarty McFarty", presumably because he is intelligent and flatulent.  We started calling each other that name and I captured the humor of the moment.  Being silly together as a family provides some of the best memories they will ever have.

Easton asked me, "Why do you take so many pictures of us"?  I answered, "Because some day you'll want more than just your perception of childhood to rely on as the truth of what life was like for you."  He agreed, but with a limited understanding of what I described.  Someday it will make sense to him.  This blog of our family will hopefully aid in explaining the realities of childhood that are missed by kids when they are in the midst of living it.  I'm finally starting to understand why I do this.  The purpose seems more clear with each passing year.

Good call losing the beard, brother. You looked like a terrorist and I was afraid to look you in the eye while you sported that aweful rodent on your face. :-) -Tam

I appreciate the feedback, Tam! I'll chalk that one up in the "no beard" column and score it accordingly. There may be a middle ground between clean shaven and terrorist beard though... Not everyone can pull off a mustache as well as David does.