I'll probably get in trouble for saying this, but I have more fun being in other people's weddings than my own.  My wedding was a life-changing event combined with the stress of wanting everything to be perfect for Kendra as well as concern for our hundred closest friends and family.  My wedding was wonderful and I'm content with how it turned out, but this past weekend with Logan and Bree for their wedding was much more relaxing, social, and celebratory.

We spent as much time as possible with Ouma and Oupa.  During our free time we took walks downtown San Luis Obispo and along the beach.  The disturbing gum wall was entertaining for us and mesmerizing for the twins. 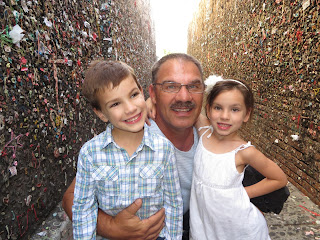 The beach-front resort we stayed at was more like cliff-front because only a small seaweed-filled, rocky beach is accessible from the hotel steps.  Oupa, Easton, and I took a walk the first morning while the girls shopped and prepared for the big day.  Easton was interested in every rock, shell, and moving thing along our trek through the beach.  We reached a huge, barely-submerged rock area where many different organisms thrived. 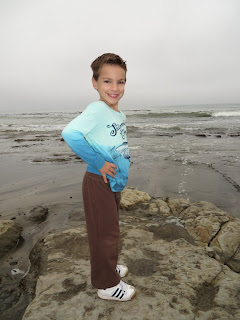 Easton touched, picked, and threw out to sea everything he could get his hands on.  The poor snails and crabs had no chance with Mr. Investigator discovering life.  The snails and crabs were piled on top of each other in some areas because they were so thick.  We spent an hour dropping snails into the mouths of ocean anemones.  Their tentacles would quickly envelope the shell and we hypothesized the anemones would suck the snail right out of the shell.  How's that for a marine biology lesson during boy time? 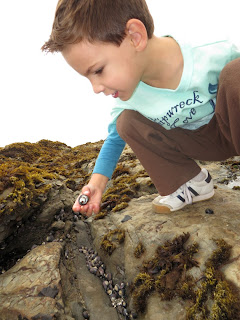 Having these experiences with Oupa made it even more special.  I'm glad the two of them have so many points of interaction.  Easton is getting an opportunity that I never had.  He has a grandpa who is alive and makes time to pour into him for the self-less purpose of building Easton's character while providing a consistent, stable foundation of love and authority.  That's a long sentence, but you get the point. 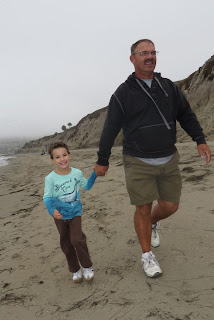 The temperature was perfect even though the water was cold.  We soaked up some rays to add color to our skin for the wedding pictures.  We built sand castles, chased waves, and found sand in every crack and crevice in our bodies.   Totally worth it for moments like this. 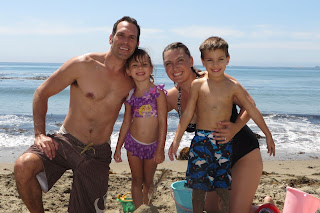 I taught Easton and Layla how to capture sand crabs (a.k.a. Pacific mole crabs).  They were small, but fun to catch.  We would wait for the wave to flow back out to the ocean and dig up a big scoop in a bucket.  Then sift through the bucket and throw the sand crabs into our holding tank.  All of those little round things are sand crabs.  Unfortunately there is no value or usage for such small creatures so we threw them back in the ocean before leaving. 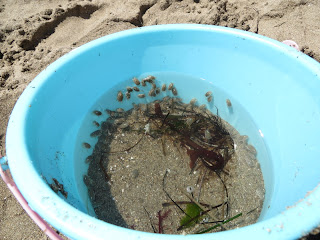 This is Bree (in the white shirt), my new sister and Jamie her sister.  Layla quickly found her way into everyone's heart with her charming personality.  During the rehearsal dinner several people shared stories or comments.  Layla jumped right in with some well-spoken encouraging words.  Unfortunately I was taking Big Time to the bathroom, but I did get a video of her repeating her comments to Bree's friend.  Maybe i'll upload it even though it's tough to hear. 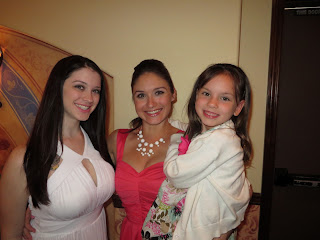 The reason we drove 9 hours, took two vacation days, missed church, and skipped two school days was to be as much a part of the Logan and Bree's big weekend as possible.  mission accomplished! 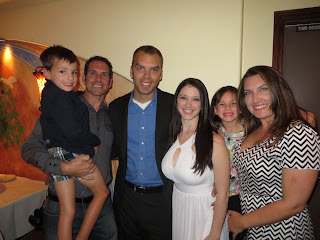 The next day Easton and I went back to the ocean.  This time we took uncle Casey and Cousin Heather.  Easton was so excited to show Layla the ocean anemones and snails.  I had to carry them away from the area when it was time to leave because they were having such a great time exploring and experimenting. 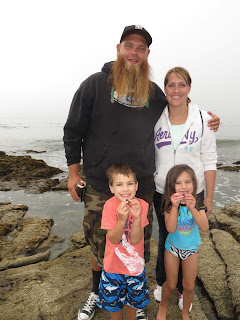 If money were no object we would have a house on the beach where we could play in the sand and surf every day.  The twins are as smitten by the ocean as Kendra and I are. 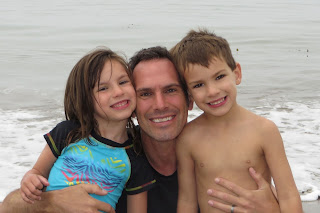 One of the more humorous moments was watching uncle Casey and the twins run from the waves.  The three of them ended up fairly wet, but it was worth it for the amount of smiles and laughs produced. 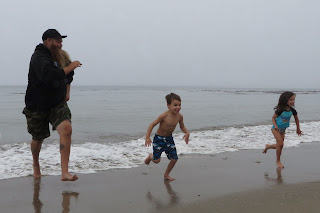 The adventures from the wedding weekend seemed to overlap from hour to hour because there were so many new experiences for the twins.  It was almost time for the wedding and the twins' debut in the public eye!