We are proud parents of kindergarteners.  That statement sounds incredibly strange and evokes emotions I am still sorting through.  Even so, time marches on!  Kendra took pictures while I was out of town all week for work.  Kendra asked them what they want to be when they grown up.  Easton wants to be an astronaut! 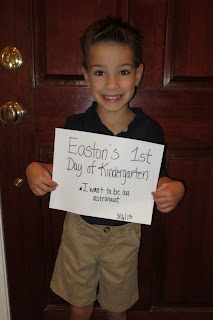 Layla wants to be a ballerina ice skater. 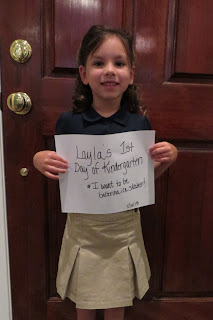 My plan is to redo these "when I grow up" pictures each year all the way through college.  Will be very interesting to see how it changes as they find new passions.  I haven't questioned their kindergarten readiness even once over the past year.  Kendra and I worked diligently, but these two are so intelligent that I don't know how much credit to take.  Their school requires uniforms.  We are happy about that.  No need to keep up with the latest fashions and fads.  Every kid starts out as equals.  That is more important than allowing for kids to express their individuality.  Come on, they are five... 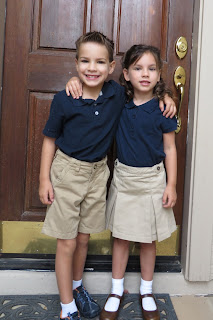 Even though they are in separate classes they spend recess playing together some.  Hearing about the fun they have learning and friends made is the highlight of my day whether I'm in town or not.  They will remain best friends and stick up for each other when the time comes.  knowing that provides an additional layer of peace when I think about them being in public school. 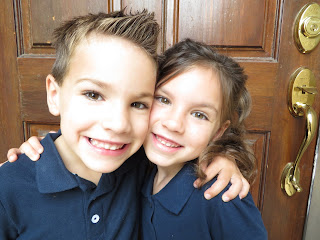 This is where the parents say, "good-bye" and they walk to their classroom door in the background. 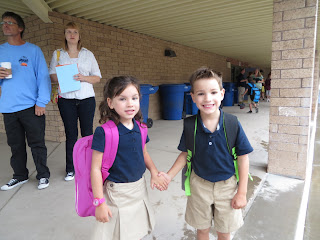 I usually only post the pictures that turn out well, which amounts to about one out of every five taken.  I'm including this one because I wanted a picture of their faces and the backpacks to show what they have, but it didn't turn out like I'd hoped.  We saw it in the preview screen on the camera LCD and had a good laugh about how it didn't turn out. 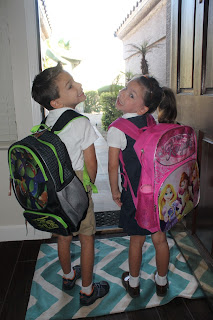 Then there's this one.  Probably my favorite of the lot.  Showing their height difference, smiley faces, and the school in the background. 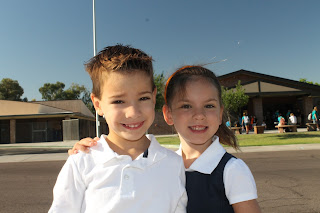 This is the real gem though.  Of all the pictures I wanted this one fits the most accurately.  Both of them ready to head to class waving good-bye.  I heard kids respond the same when they go to kindergarten on the first day as they will when they go to college on the first day.  What we can expect is confidence, security of who they are, and excitement for what's ahead.  There was no crying or belabouring the moment.  Easton and Layla gave us one quick hug and kiss good-bye and then off they went. 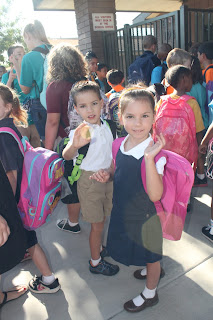 The M-F all day schedule is taking some getting used to.  They are happy to go to school, but don't understand why I didn't spend much time with them (in their eyes).  Reality is a funny thing.  The truth is I took off work Friday to spend the day with them from early release time 1:40 until 8:00 bedtime it wasn't enough.  Then when I spent several hours on Saturday swimming and playing it still wasn't enough.  However, in their minds I had lots more time to make up for because I was out of town.

Anyway, my friend had a Hape Quadrilla Twist Set Marble Run for sale and he gave it to me for $30!  It retails for $225 or so.  That is shocking to me, but apparently some people pay it!  We've set it up twice now and they have a blast playing with it. 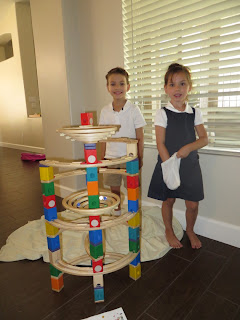 There are eight separate levels or steps to build the one pictured in the next run.  I took the opportunity to teach them the proper steps to build something.  first gather the inventory.  For this part I had each one take the "foreman" role of telling the other kid what inventory or pieces were needed to complete the level.  Then provide instructions for how the other kid should connect each piece to the structure.  Watching them lead each other through such an exercise was both humorous and impressive.  Their personalities were on full display and they used such great, descriptive instructions that I was very proud of their efforts. 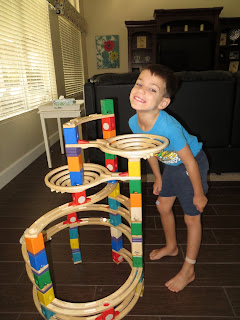 This coming week will be our first official week of the new norm.  I'm going to work, the twins are going to school, and Kendra will be on hunt for a part time job.