We are safe at home after our San Luis Obispo trip for Logan and Bree's wedding.  I have a new sister!  Last night I sat down to blog with a plethora of pictures to edit, but a massive haboob rolled through Phoenix.  I shut down the house electricity because the lights dimmed twice in a minute indicating power surges or outages.  I'll get back to the California wedding tomorrow, but this is what's on my mind right now.

There's been an infiltration of "fairness expectations" among the ranks of the 4 Webbs and society at large.  Part of this is cultural and part is our own parenting practices.  The "that's not fair" situations are usually accompanied by pouting, crossed arms, and a comment such as, "...but Layla has 4 crackers and I only have 3!"  My only response so far has been "life isn't fair!"  Easton asks, "but why?"  I had no answer until now.

I stopped in my tracks the last time this occurred and stared at Easton with a perplexed looked.  I traced back in my mind to figure out where this attitude came from.  I'm still a long way from figuring it out, but if I think back to my own childhood there are several occasions where I felt wronged by my Mom and Dad because something wasn't fair in my eyes.  I'll ask them for forgiveness of my wrong-thinking next time I get the chance...

I'll try to tie together cucumbers and the Bible as a starting point of unraveling this mystery. Here are the two scenarios to compare and contrast what is "truth":


The video clip shows how a monkey reacts when getting rewarded with a cucumber while his neighbor gets a sweet grape.  It shows how monkeys have an expectation of fairness.  The monkey receiving a cucumber is content until he finds out his neighbor is getting grapes.
http://www.youtube.com/watch?v=n_9RjDqJ7Zs

The article uses a parable from the Bible, which describes how vineyard workers were paid unfair wages.  They exhibited the same ungrateful response as the monkeys who were "paid" unfairly.
http://www.shepherdpress.com/right-or-fair/

Let me start by saying humans are not monkeys!  There are animals who eat their young (hamsters), kill their mate after mating (spiders), and rape females (lions).  Just because we find a trait in certain animals doesn't negate our responsibility to live rightly.

The difference between humans and animals is that humans have intelligence.  The intelligence aspect is what sets us apart all species on Earth.  Some people think humans suppress these animal instincts, but I am convinced we have a God-given ability to choose what is right.  I almost added homosexuality in the list of animal instinct behavior, but I don't want the government visiting my house with guns and tanks for stating my beliefs.

Anyway, what I learned from the article (not the youtube clip) is that I need to focus on what is right, not what is fair.  If I decide to bless Layla with an extra cracker, then so be it.  If I accidentally spend 5 minutes more with Easton than Layla, then no apology is necessary.  There is a huge amount of freedom from getting this revelation about where to focus my efforts.

I can bless whoever I want, whenever I want, however I want and there is no need for me to justify or rectify an imbalance.  My time, money, and talents can be given however I (we) decide.  Whew, that feels empowering.  I hope you choose to break free from the bondage of "fairness" in the same way I am choosing.

I'll add a single picture from our SLO trip just as a teaser for tomorrow.  This is one of my favorites. 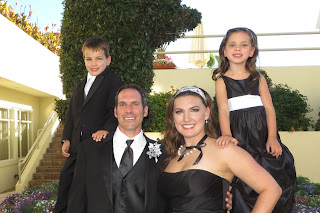 I'm still mulling your words about "fairness". I agree, it's a big revelation when we realize that "life isn't fair". You 4 look so beautiful/handsome in the black wedding attire! Can't wait to see you. Love ya gobs, MOM

It's a work-in-progress... I know I don't have all the answers and some answers I have are not right, but the blog is where I write to figure this out a little at a time. We're excited to see you in 4 days!