I asked Kendra if she is glad the kids are going to public school instead of home schooling.  I figured it would take a few months for us to see how well the twins are adjusting and for her to sort out her feelings after spending every day for the past five years.  However, after watching the twins blossom and Kendra gladly enjoying hours per day of free time the answer is clear:  yes, she is glad they are going to Kindergarten at a public school instead of home schooling.

The question has never been "can Kendra homeschool the twins?"  We've both known for years that she is capable and could do it.  The question we've been asking is, "What is the best scenario for Easton and Layla to achieve?  We came the correct conclusion that Kendra has a higher calling than teaching the twins and the twins are getting way more out of the public school experience than we could provide them at home.

I taught Layla how to tie her shoes.  She learns so easily it amazes me.  I showed her one time and she spent the rest of the week showing off at school how she can double knot her shoes.  Layla's teacher requested Kendra to consider her for the gifted classes.  My response was, "well, duh?  of course she is gifted! sign her up!"  Layla took the test and we completed the necessary paper work to get the process started.  I don't think Layla will graduate college before she turns 12, but I'm not ruling it out.

The first week I tried to figure out how to spark conversation with the twins about their schooling.  Nothing seemed to work.  Then I recalled a movie called The Story of Us staring Bruce Willis and Michelle Pfeiffer back in 1999.  I only remember one thing about it.  That is how they did "High Low" during dinner.  I tried it and it's working great!

I start of by saying, "Let's play high low".  Now they know that means, "Tell me about your day by describing the worst thing that happened and the best part of it."  It's becoming habitual already so they jump right in while doing their best to not talk with their mouth full of food.

The most surprising impact of kindergarten on Easton is his enjoyment of music class.  His "high" each day is usually the songs he sings or music he gets to hear.  I would have never guessed that because he is not known for joining in when I sing or the music is playing on the TV.

Layla got in trouble yesterday.  Her "low" was being talked to by the teacher.  Her infraction of the rules was...  wait for it.....  skipping!  Apparently there are rules that state all children must walk in a single file line to and from classes.  I was furious inside when she told me because Layla doesn't know HOW to just walk.  She flutters!  She's humming and singing and skipping or shuffling or marching everywhere she goes.  and I love that about her.  but now she has to conform to a bunch of bogus rules that I hope will not crush her spirit.

I didn't say I like everything about about public schools, it's just that the balance of good outweighs the bad.

Anyway, one evening Kendra went to zumba class and I got to spend the evening with Uno and Dos.  After dinner I turned up LMFAO's Party Rock Anthem song.  We boogied our butts off together three times through the song. 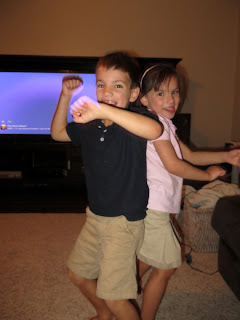 We are thrilled about how they wear school uniforms.  Although they are turning out to be the only clothes worn by the twins.  When they get home after school their shirts are covered with dirt, paint, and cheetos stains from other kids wiping their hands everywhere.  Since their uniforms are already dirty we don't see the need to have them change into other play clothes just so they can get something else dirty.  Anyway, they are comfortable and low maintenance. 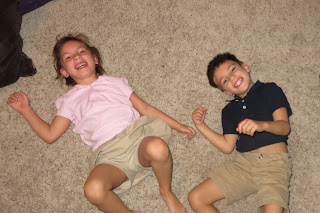 I dropped Easton and Layla off at school one morning so Kendra could sleep in for a change.  I parked at the curb and they jumped out quickly after giving me hugs.  Watching them comfortably walk together through the mass of tall, elementary kids was surreal.  I know they are five years old, but the whole independence idea is a two-edged sword.  I see them less than I ever have since they were born and the time we spend together is less about me caring for them every day that goes by.  I still don't have any context to measure their awesomeness against other kids because I don't see anyone else, but I'm convinced they are on a whole different level than other kids their age.  This moment of watching them walk away made me proud and sad at the same time. 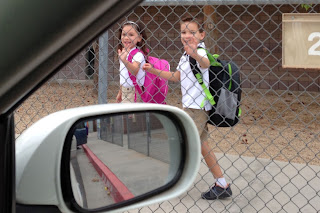 The twins wanted to go for sushi one night for dinner.  I took them to a place with cheap happy hour deals because sushi can get expensive quick when taking two sashimi lovers like Easton and Layla.  Easton's eyes lit up when the chef made a special version of the dragon roll for us.  The head is made from a cucumber and the top is eel and avocado, by the way. 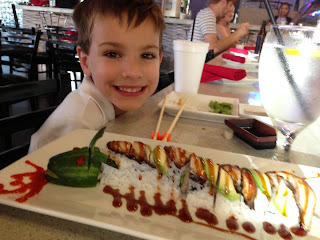 Layla posed with her best dragon impression.  Her favorite sushi is the raw salmon nigiri.  They are adventurous and well versed when it comes to eating different types of food.  This is becoming more pronounced as I hear stories of the unhealthy and repetitive foods kids bring in their lunch bags at school, God help me. 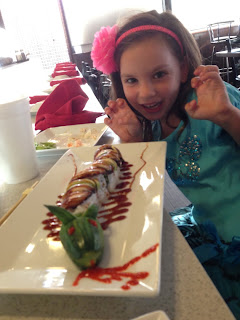 We paid the bill for the twins to start soccer in a few weeks.  Kendra put both of them on a boys league.  She talked to the coach and from what she says that is fairly common for a girl to be in a boys league for the first year or two.  Going to the games and practices will turn Kendra into an official "soccer mom".  I know she will be proud of that title.