This lazy Saturday morning is refreshingly boring. No one is rushing around shoveling cookie crisp cereal while mumbling about lost keys (ahem… guilty as charged). Instead we’re talking through the “to do” list for the day and sitting together as a family at the breakfast table eating slow-cooked, steel-cut oatmeal. I could care less what method was used to cut my oatmeal, but supposedly steel-cut are better somehow?

Anyway, yesterday Kendra and Oma met up with her friend, Megan (happy birthday to you!), and her other mommy friends. 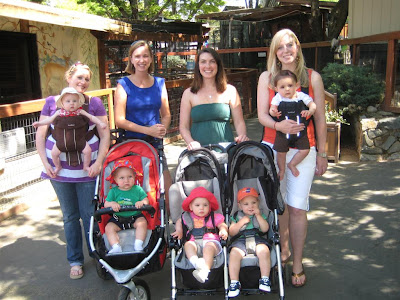 Amazingly, Oma was able to get a picture with all mommies and all babies looking forward. The odds of getting such a valuable picture decrease exponentially with each additional baby. Wow, that was an extra-nerdy explanation, huh.

They went to the zoo, but the animals were hiding and sleeping for the most part. However, the usual lions and tigers and bears were out in full force so the outing is considered successful. After the zoo they strolled over to the park next door and Layla figured out how to spin herself around in the little teacup thing. Her laughs are from deep, deep down and we watched it on the big screen TV several times. Layla loves to see herself on video… She is a star in the making.

Tonight Kendra and I will leave the twins with her parents overnight so we can have a night out by ourselves, all night long. There are only a few people we trust to watch Easton and Layla. Leaving them overnight is worrisome no matter who it is or how comfortable we are. Just one of those protective parental hurdles to overcome kind of like seeing a pacifier hit the floor for the first time with no wipes handy...

Not that I have anything better to do than write more about the adventures of twins, but this’ll be a short post so I can do more of nothing for a while longer. Ah, the joys of the weekend. Easton and Layla discovered the small pile of rocks in Oma and Opa's backyard so we'll have at least an hour of fun scattering rocks all over the patio.