This post is dedicated to our baby boy, Easton Troy. He's the mellow, relaxed one of our twins and luckily he balances out Layla who is intense and ready to go, Go, GO! This picture is of Easton lying next to me when he was just 5 days old. I'm amazed to see how tiny his head is against my hand. 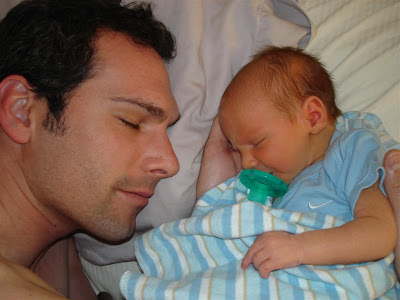 Kendra and I both truly felt we didn't care how many or what sex the babies were once we found out she was pregnant. Although I will say that in my dreams over the months and years before she was pregnant I clearly saw a boy and a girl as our two kids. I told Kendra about the dreams every morning when I could recall them. The troublesome part of my dreams was I could never figure out which one was the "older" sibling. As it turns out, that was all part of the plan and I never considered the possibility of twins. And just like that we were blessed with twins. Here's Easton from today as he tries to get more chicken rice soup in his mouth than on his face. I'd call this marginally successful. :) 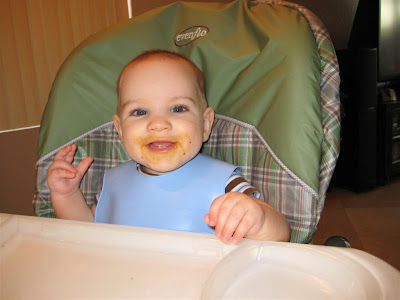 Here's Easton's list of personal information:
Age: 8 months and 1 week
Favorite toy: He plays with almost anything that makes noise and even more so if he can put all or some part of the toy in his mouth. He usually will grab the plastic, colored doughnuts and chase them around the room in circles. 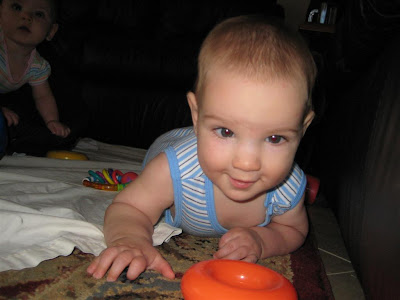 Favorite bed time comforts: The blue Nunu blanket and his thumb. He's developed a conditioned response where as soon as we lay him in the crib and give him the blue Nunu, he pops his thumb in his mouth and it's off to sleepy town he goes.
Favorite food: I'd say crackers if I have to single out a specific food. However, most of the time he's like a human garbage disposal vacuuming in everything edible and chugging bottles of formula. That explains why he's been exactly 1 pound heavier than Layla since they were born.
Favorite time of day: Early, early morning. Between the time he wakes up and when he sees Kendra or I and realizes his breakfast is just seconds away - that's when he's all smiles all the time.
Favorite book: Touch and Feel Farm (he likes to feel the fake dog hair)
Favorite Movie: Fisher Price puppet thingy. i'll have to get the name of it, but it has three puppets mixed in with kids dancing around. Easton watches TV no matter what movie is on... Even the "direcTV" logo as a screen saver slowly moving across the screen is enough to keep his attention for hours.
What people say when meeting him for the first time: "He's smiling at ME!" Little do they know he smiles at everyone... He doesn't just glance at each person and go back to staring at his toy... He really loves people watching and stares as he smiles.
Favorite noise to make: While eating he sounds like an Ewok from Star Wars. He goes on and on during the entire meal.
Favorite face to make: His "flirty face" where he smiles at someone enough to show his bottom teeth, but not so much his eyes are squeezed shut. He regularly uses this cute face to get the attention of anyone within seeing distance.
What makes him cry: When more than 10 seconds go by without a parent picking him up once one of us goes into their room after nap time.
Nicknames: Monkers, Buddy, Hot Rod, E.T., Monkey 2 (he was born after Layla by a few minutes)
Here is a picture of Easton and I as he intently watches his Fisher Price movie and I do my best to look as interested as he is. 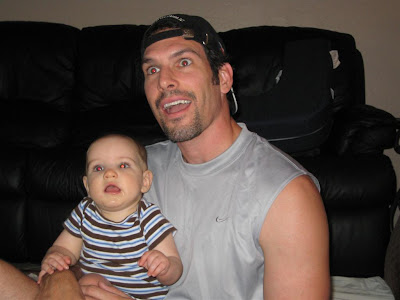 Easton is without a doubt the happiest baby I've ever seen and other people tell us the same thing about him. He's content just to sit and play with a block on the floor for long periods of time and that makes things easier on Mommy when she needs to give extra attention to Layla. Here's one final picture of Easton that I cherish. My dad (Papa) holding my son on the day he was born:

Who knows what he'll turn out to do with his life, but it's exciting for me as a father to see him daily growing into a wonderful boy. Kendra and I are incredibly grateful for two happy, healthy babies.
Posted by The Four Webbs at 10:06 PM

Hi Bronson and Kendr!
Thanks for the info about Easton. He has his unique personality and I can't wait to hug and kiss both of your babies!I know October will go by slowly until we see you and then quickly while we are there. Judy wants some pics of you all to put on a calendar that she gives to grandpa Siebold each year.
Love ya gobs,
MOM