First time for everything

What an exciting weekend for the 4 Webbs! We packed our free time with food, fun, and fellowship so it turned out just as we'd hoped. I'll jump right into the list of "Firsts" because it could take all of my blog time just for these events...

First fruits and foods for Easton and Layla: Kendra is introducing new foods for the twins every day; Green beans, pasta, maple syrup, etc. So far no allergies have surfaced and we are breathing a sigh of relief that they can eat so many different foods. Aunt Mary was planning to come over for dinner the other night, but Kendra was gone longer than I expected so I asked her to come over early so she could help me juggle the twins. You'll notice her hand is there in the picture... If I didn't crop her out, she'd be very upset because she wasn't able to get herself "ready" for blog-worthy pictures. Anyway, here is Easton and Layla eating kiwi for the first time. It's green... it's mushy... it's tasty. Go babies! 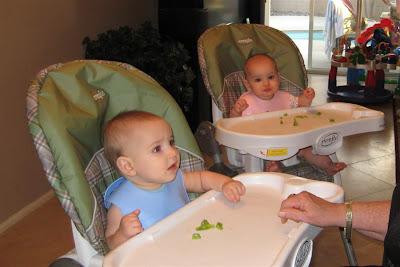 First time in the church nursery: It was bound to happen sooner or later and we decided this past Sunday the twins were no longer quiet enough to sit through church on our laps. Easton and Layla stayed in the church nursery during the entire service! We experienced similar feelings to someone sending a kid off for the first day of kindergarten... At least, that's what I guess it will feel like... The nursery and staff there are incredible and we weren't nervous or worried about them at all. The twins played and smiled the whole time (from what the staff said). Everyone enjoyed them as much as they enjoyed being in the new environment and playing with new toys. We just had to accept that our babies are growing up and are no longer new borns that we will hold in our arms. Here they are in the nursery as we said, "good bye!" before service. 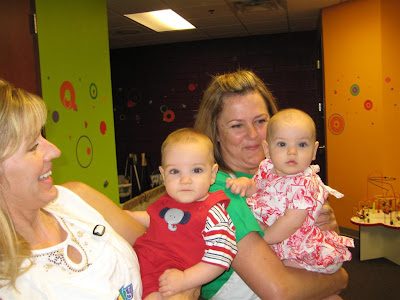 Don't they look sweet in their matching red outfits? We were a little worried about Easton because he gets "stranger danger" sometimes. If a stranger holds him, once in a while he starts crying and becomes fearful even if one of us is standing right next to him. So leaving him with a bunch of strangers was a concern, but things worked out very well.

First time having our Pastor and his wife in our house for dinner. We had a great time sharing lunch and conversation with Pastor Phil and his wife, Pam. They were kind enough to take a sunday afternoon and spend their valuable time hanging out with the 4 Webbs. I took the following picture as soon as they came in and sat down. Mostly because we planned to eat ribs for lunch and there was a high probability someone was going to get their clothes messed up from the BBQ sauce. 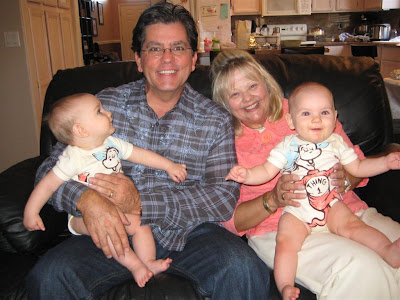 Easton was captivated by Pastor Phil and his voice. Layla was excited because her outfit matched Pam's so well. Good color coordination! Christ Life Church means so much to us and we are looking forward to getting more involved now that the twins are not quite so demanding with feedings every two hours.

First time Layla crawled towards me: While I was sitting on the ground playing with Easton and Layla I called Layla over to me and after a few times she headed my direction. It was the first time she crawled towards me without me holding a toy to convince her. It was just me smiling with my arms out and she chose to leave her toy and head in my direction. Kendra's huge nursing pillow was between us, but you know how extraordinarily strong willed she is. She shifted into 4 wheel drive and crawled right over the pillow to me! 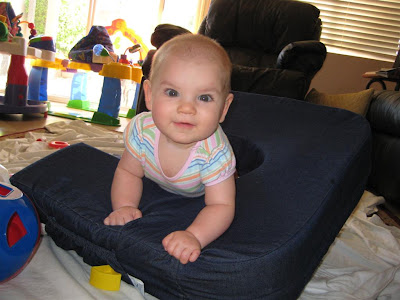 That's all for now... I need to go peek at my 401k and see how many more years i'll need to work before retiring after this bloodbath on Wall Street.
Posted by The Four Webbs at 9:43 PM