There are no words or pictures to describe the seemingly insignificant moment.  As insignificant as it might be to most everyone else, this is a big deal.  Layla is staying the night at her friend's house for a sleep over birthday party.

this is the first time in her life to sleep at someone else's house without us (other than Ouma and Oupa's).  Kendra or I kissed her good night, read books, and sang songs every single night of her almost 6 year old life.  until now.

She's been counting down the "sleeps" for the past two weeks and now here it is.  I didn't let her see how much of a struggle it is for me because I want her to have the best time of her life celebrating her friend's birthday.  I trust the parents in the house where she is staying.  that is non-negotiable.  Even so, the thought of her not being in my protective care is a big step for me.  I'm not sad or afraid about Layla's absence.  I'm just working through the letting-go process one step at a time... reluctantly...  because in my mind this process shouldn't start for another 6 years or so.

This morning before school I said in a poughty voice, "Layla, I'm going to miss you very much tonight.  Who will sing you a song good night?"  She put her hands on my face and said, "don't worry Dad.  You can give me TWO kisses and TWO hugs before I leave".

Tomorrow morning at home will be different than any morning in the past several years.  Layla usually crawls in bed with Kendra and I to get morning snuggles. 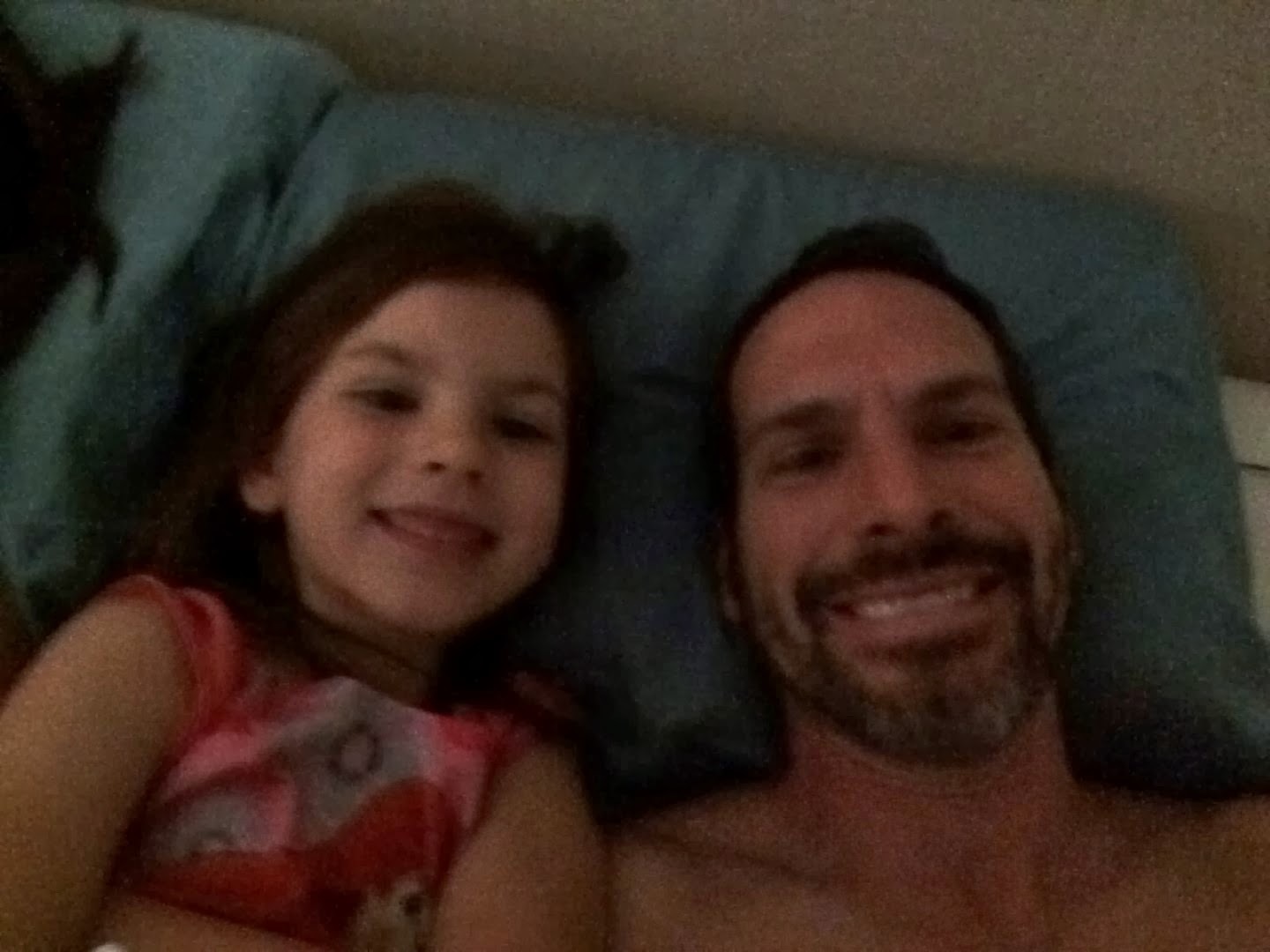 This is certainly not the last time she will be in someone else's care over night, but it is the first.

Easton was looking forward to today as well.  Not because he wanted Layla out of the house, but because we made plans for some daddy time.  I took him for the longest bike ride of his riding career.  we rode the canal trail several miles past a golf course, a power plant, and train tracks.  There was no opportunity for pictures while riding, but this was one of the many adventures that no pictures are necessary for us to remember it.  He had his first cherry lime-ade at Sonic.  That's big in my family lineage.  Easton and Layla never have soda; not even on special occasions.  But like many rules and guidelines, it's not the end of the world to break them occasionally.  We share a cherry lime-ade (with sprite in it) once in a blue moon.

Before bedtime we played some golf with Tiger Woods.  I found Xbox Kinect Masters Golf game really cheap and couldn't resist.  Our Xbox room is big enough for him to take full swings and not hit anyone or anything.  The disappointing part is that we can't play two-player against each other, but it's good to have him see some basics and play against the greats like Jack Nicklaus. Swinging golf clubs inside is prohibited, but under adult supervision it's fun! 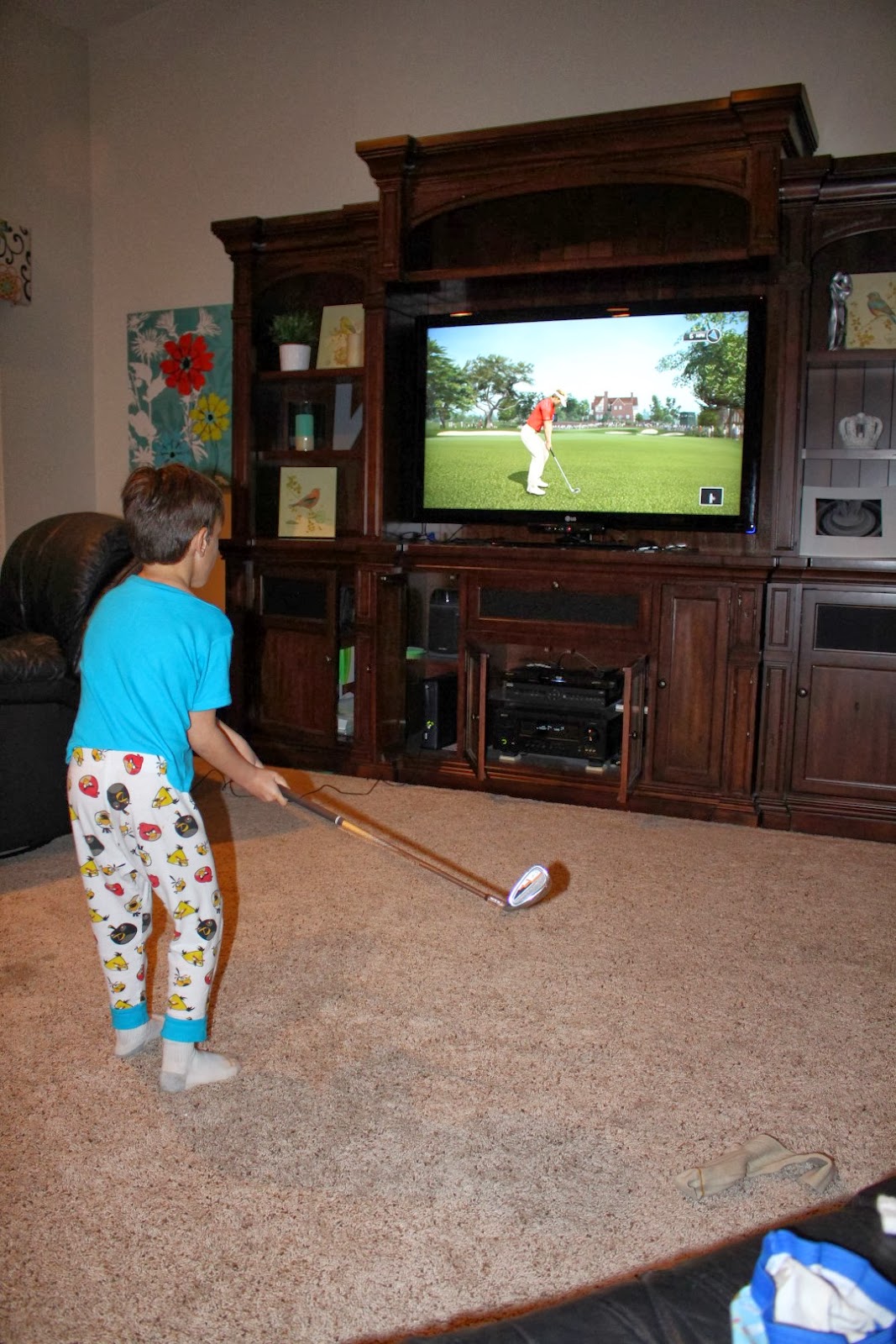 Another guideline we've followed since the twins were babies is to never sleep in their bed and never let them sleep in ours.  When I say never, i mean never.  Neither of them have slept with us since they were 6 months old or so.  Those first two years were a blur so I could be way off.  What I know is that at some point we drew the line and said, "sleep in your own bed".

Easton asked me several times over the past few weeks to sleep in his bed with him.  We planned to do that tonight and I'm glad I did.  I expected him to want to stay awake talking or making fart noises, but that didn't happen.  he cuddled up against me as I sang his good-night song.  Then he took a few deep breathes, popped his thumb in his mouth, and said, "this is the best day ever." Within a minute he was fast asleep and didn't notice as I slipped out the door.

It was a good day in the Webb house.  Maybe one of the best.

See you soon (and Layla tomorrow morning).
Posted by The Four Webbs at 10:48 PM