God in the Desert

After graduating from college I moved from Missouri to Phoenix two weeks later.  I packed my car with clothes, my computer, and my golf clubs.  That's it.  All my earthly possessions fit in the back seat of my car and everything in there was bought for me by Ma and Pa.  I still have the same set of golf clubs 18 years later.

Pa sent me his golf clubs in the mail the other day and I am excited to use his nicer clubs and take care of them until Easton gets tall enough to swing them.  Easton was happy to get the clubs, but because they are of no use to him right now, he turned his attention to the big box used to ship the clubs.  He said, "Can we use this for a space shuttle runway?"  Why not?

As the twins and I constructed a runway Layla's marker accidentally caught my arm as I was moving to draw the control tower.  She held her breath and stopped to see my reaction.  This was one of those critical moments.  Sometimes these happen where I sense how insignificant the situation is to me, but how important and character-shaping it is for the twins.  Her response to what happened was as important as mine.  If she immediately started to cry or apologize or worry then I would know my reactions are out of line with the character a good father should exhibit.  In other words, her expectation of my reaction is more telling about my parenting than my puffed-up impression of myself.

To my delight she responded with a sheepish smile and a "sorry!"  I responded casually by saying, "Layla, look what you did!  You better fix that by creating something beautiful out of the accident."  I held my arm out and she went to town drawing this masterpiece. 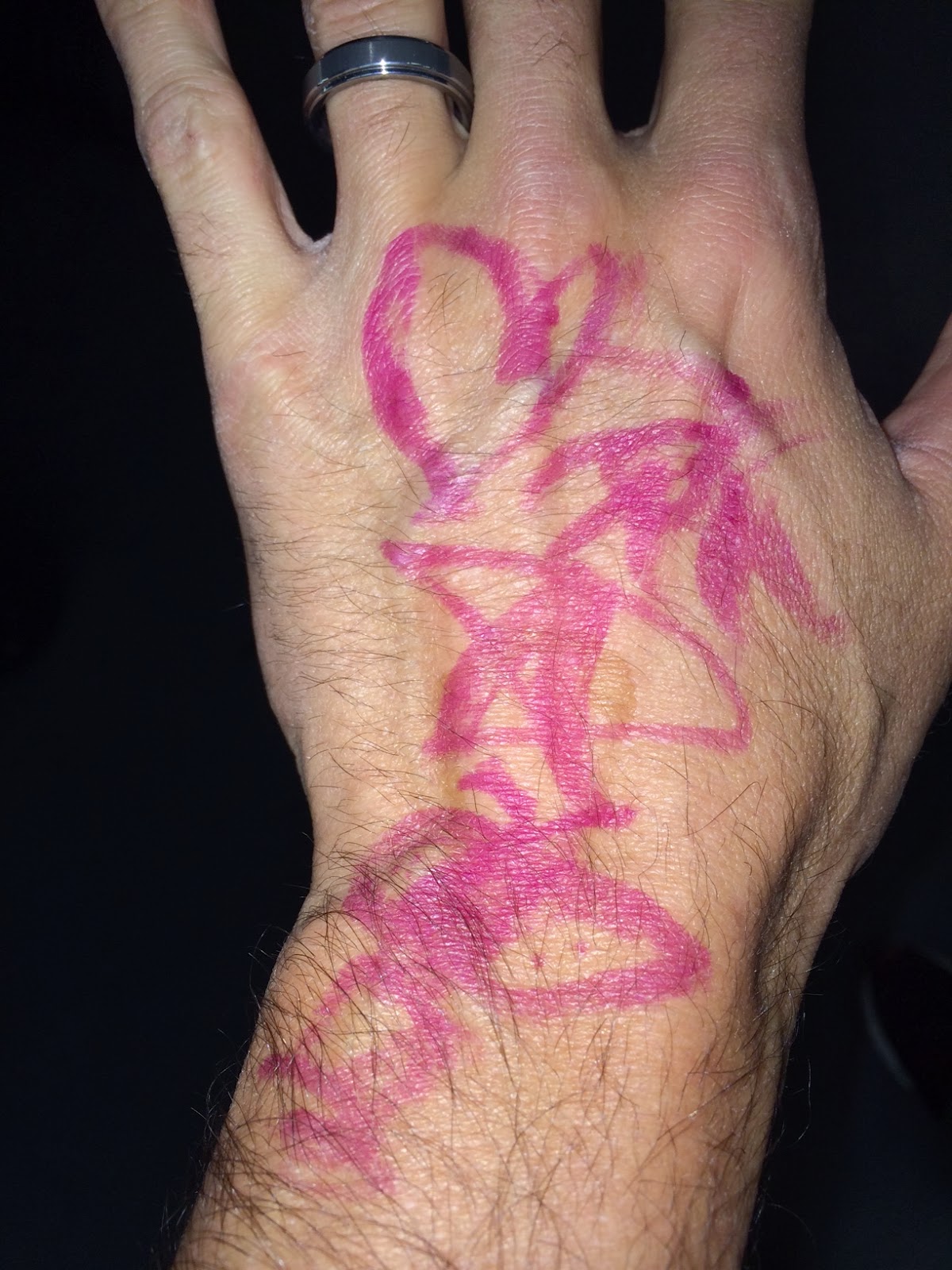 What could have turned out to be damaging ended up being freeing for her to express her creativity in a way she never has before.  I don't want her to become a tattoo artist, but my response of "accidents happen!  let's make the most of it"  shaped the atmosphere and Layla's image of herself in the same way my anger or reaction would have.

I'm sharing the story to brag on myself.  I've reacted out of anger before and saw the impact on their life.  I know, it's just a pink mark on my wrist, but many times I see parents blow things out of proportion.  two morals of the story:

1. perfection (or the expectation of it) is the enemy of excellence.  I don't expect Easton or Layla to be perfect.  They can only be excellent if perfection is not expected.  As Bob Ross says, ""We don't make mistakes; we just have happy accidents."

2. anger is not wrong.  anger becomes wrong when I expect the behavior of others to change as a result of expressing it.

I found a couple of other pictures from my camera.  Our rock climbing adventure is still brought up in conversation daily because of how much the twins enjoyed it.  This shows the degree of incline of the rocks we scrambled up. 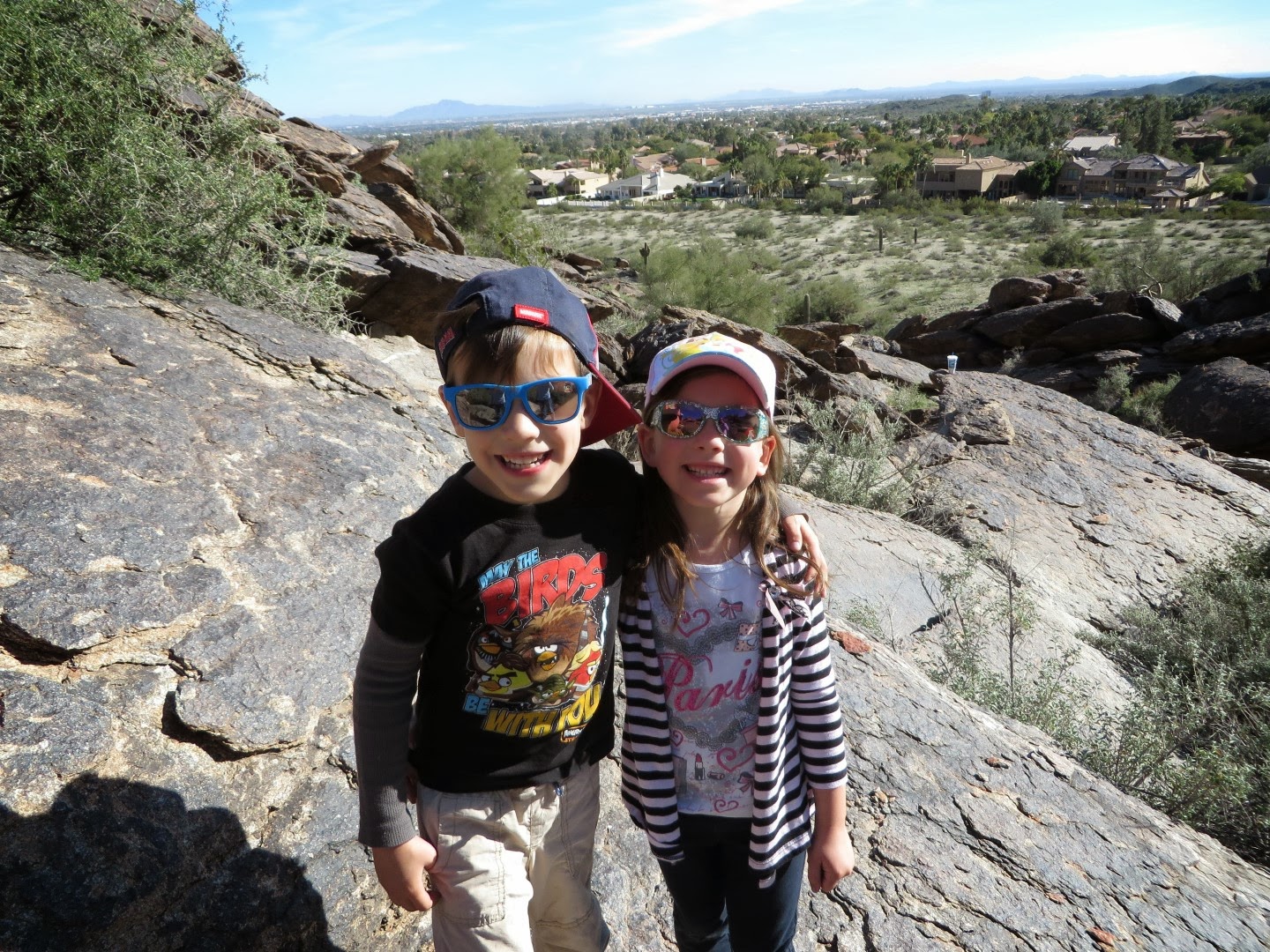 The most proud moment of our hike was the part where God spoke to us.  Yes, God speaks.  Yes, five-year-olds can hear from God... probably easier than an old guy who has known God for decades.  Ever read that verse in the Bible that talks about "faith like a child"?  This is why.

Kendra and I regularly talk about hearing God's voice and expect to hear Him.  At the peak of our rock climbing I gave instructions to lay down on the rock and listen for God's voice for one minute in the midst of the silence.  It was really quiet up there.  one minute might not seem like a long time, but to a five-year-old with a view of the city and rocks to climb that could feel like an hour.

Anyway, as we lay on the rock I began to explain how God speaks in pictures, words, and senses.  Layla stopped me mid-sentence and said, "Shhhh...  God's talking to me."  I raised my eyebrows and shut my mouth. 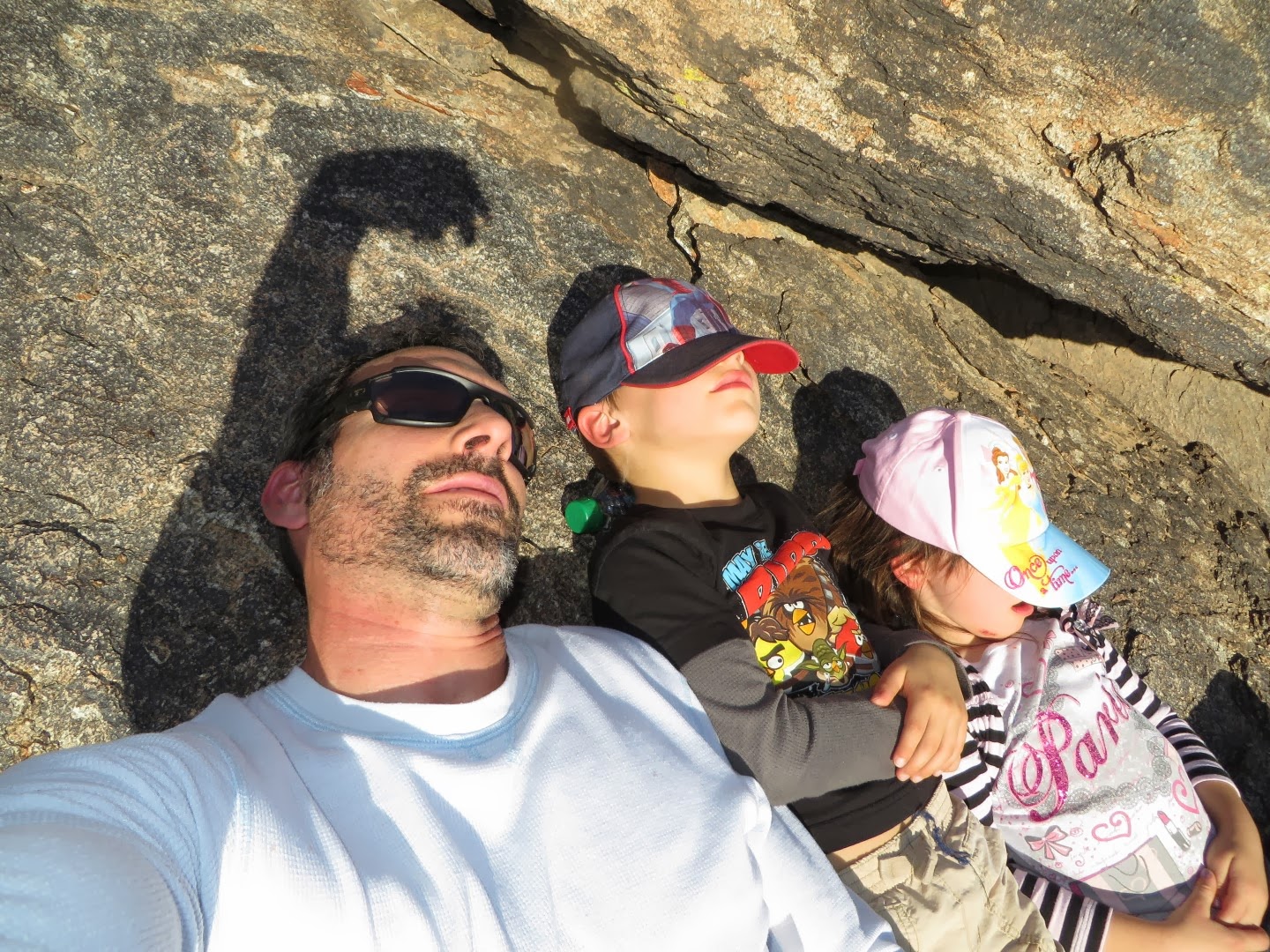 After the minute was up we talked about what God said.  Easton heard God say he was proud of Easton for being a good brother and helping Layla.  Layla heard God say she is a warrior.  Sounds like things God would say.  Some people read a story like this and don't believe it.  There's a different verse for that.  It says: as he thinks in his heart, so is he.  That means if you don't believe God talks to you, then you're right. If you do believe God talks to you, then you're right.

Love this blog. Beautiful to hear about the sweet hearts of your kids.
--Joanie