Happy 2014!  Our house decorations are stored for another year, but we are still in the Christmas spirit.  We just can't let it go so we went to the zoo for Zoo Lights.  Our membership includes two free passes.  Kendra stayed home because she had other things to do and I love Daddy time with the twins.  She gets to see them every morning and afternoon before and after school.

We are constantly adjusting to find the balance of family time with all four of us and individual parent time with the twins.  If we do everything together as the 4 Webbs then neither parent gets a break from action.  but if we do nothing together as a family, then we don't make family memories where the kids see Kendra and I interacting.

Anyway, our trip to see the Zoo Lights was tons of fun.  Zero wind, 65 degree weather, and darkness provided the perfect environment to see the sights.  Some trees were fully decorated out the ends of the branches. There was virtually nothing new from the previous three years the twins have seen it, but at their age each year is almost like a whole new experience. 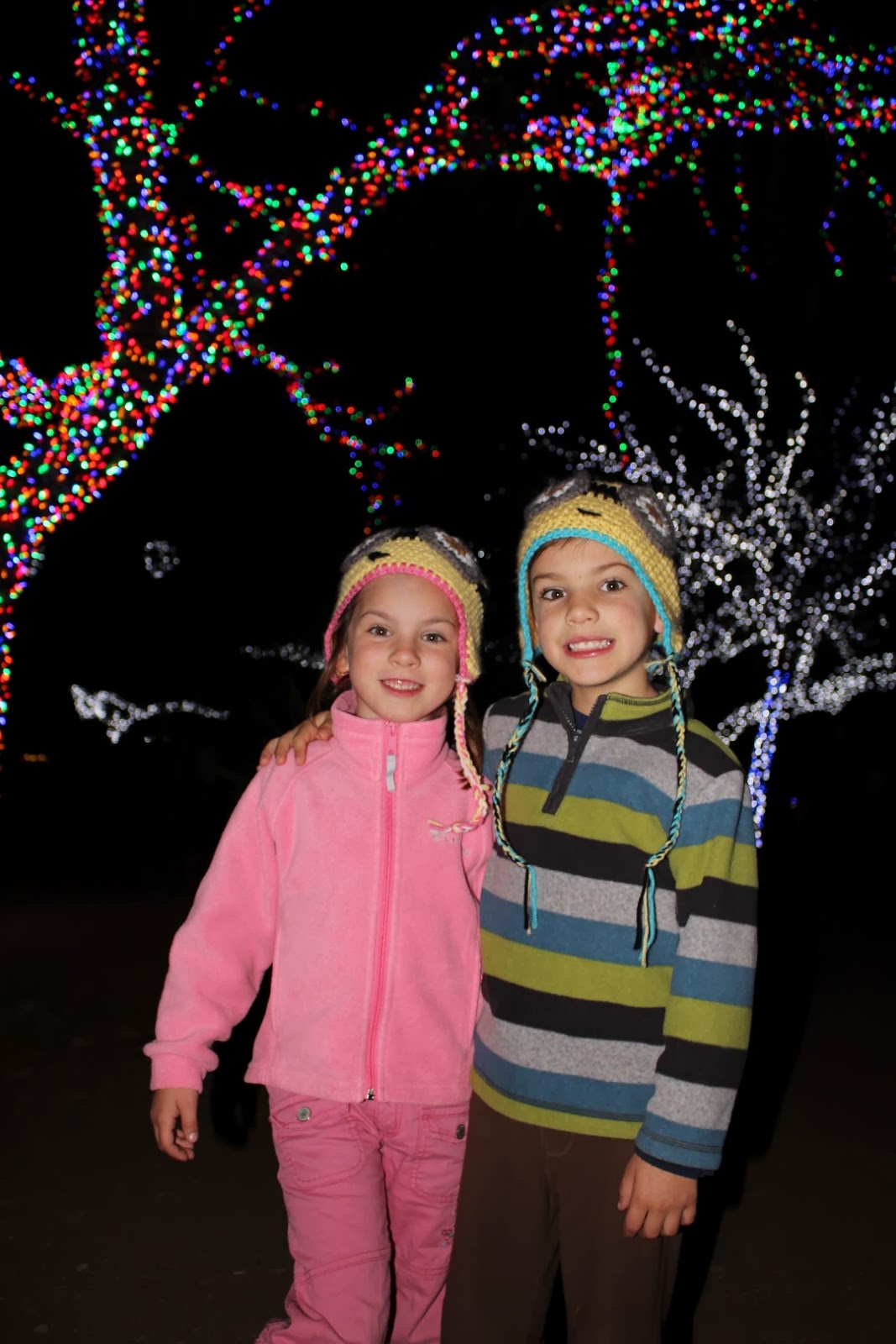 It's hard to see in this next picture, but there is a 15 foot tall animated giraffe, named Jengo, behind the twins.  He spent several minutes conversing with Layla and then Easton.  There were about 20 kids surrounding him, but the twins were the most interactive and they spoke loud enough for the guy operating the giraffe to hear them. 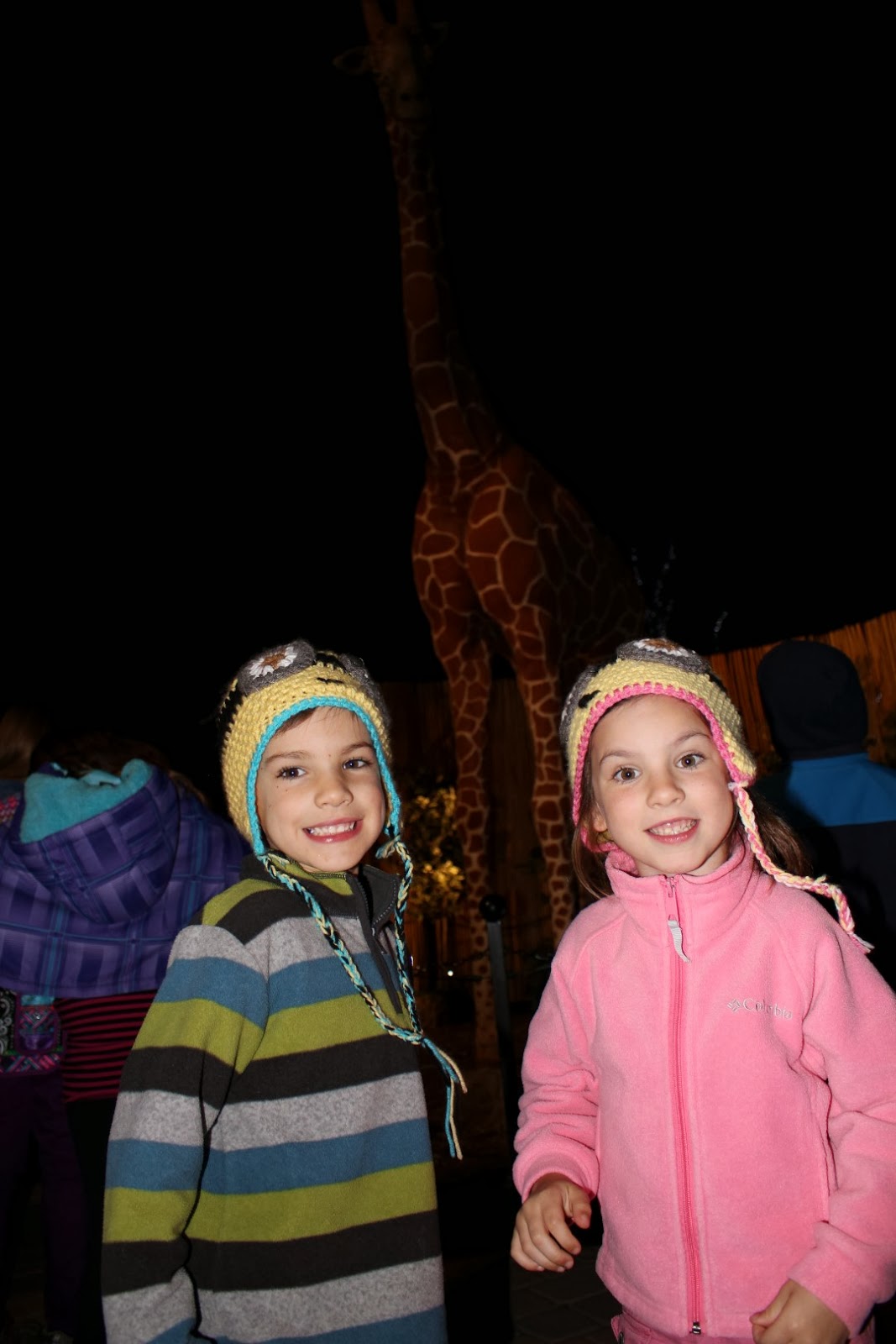 On top of the cost to enter the park I spent about $20 on other non-essential, but very enjoyable items and experiences.  They are both eating like teenager boys during two-a-day football practice season.  The baby birds are continually chirping with open mouths asking for food.  Our time at the zoo was no different.  I chose cinnamon roasted almonds and hot chocolate, which turned out to be a big hit. 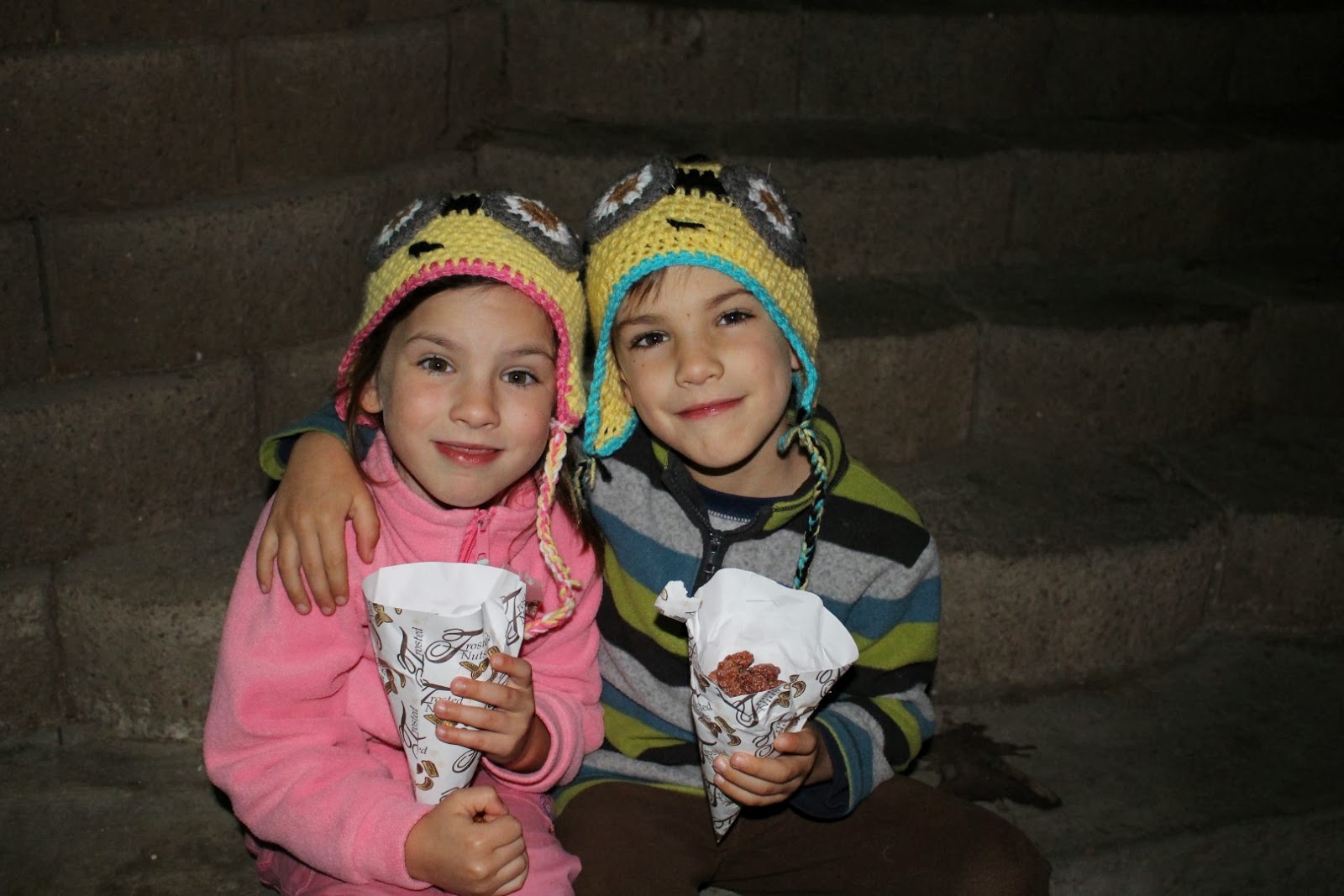 There is a very short tube slide called "the polar slide".  at $3 per kid it was an expensive 10 seconds of fun, but the confidence and thrill Easton and Layla took away made it worthwhile.  Each year we passed by it, but this year they made their case for being old enough to handle it.  They waited in line with the other big kids and I stood down-range to watch them slide by.  They will ask to do this every year from now on.  They are finally old enough to ride it and enjoy it. 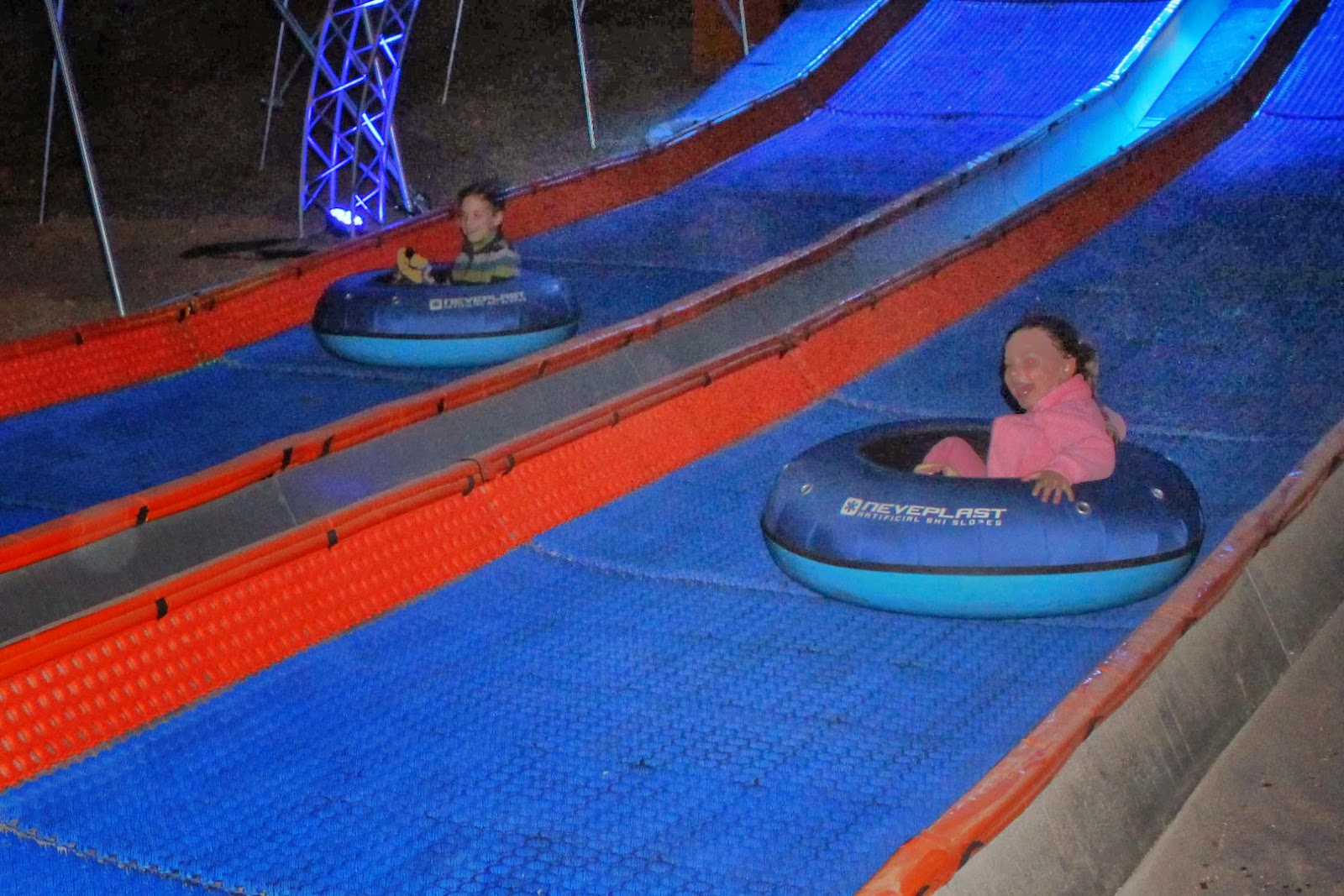 The park was packed with parents and kids.  I had some difficulty finding someon to take a picture of us three together because everyone had a baby in their arms and kids running around their feet as they passed by.  We stood around the trees for a couple of minutes and finally an elderly couple came by and were willing to take a picture.  Unfortunately when i looked at the display screen i didn't notice Layla's eye's closed, but this was the only picture in the park so it'll have to do. 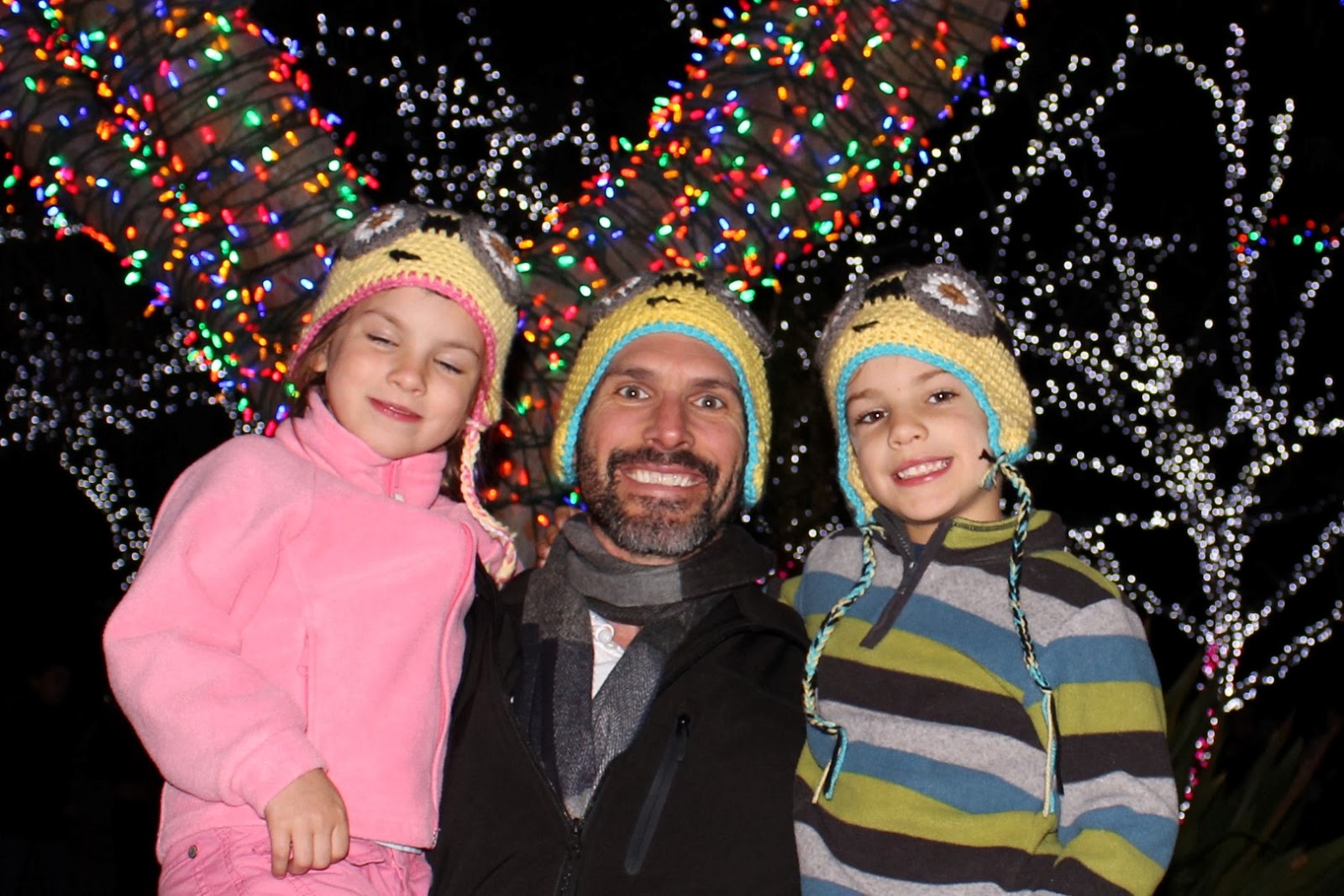 The other cost was $6 for the three of us to pet the sting rays.  We saw the sting rays when we first walked into the zoo and I said, "if we have time on the way out, then we'll do it."  We ended up with some extra time and got our hands wet.  The stingrays swirl around the pool-sized tank come by and brush against their hands waiting patiently in the water.  The twins touched 20 or so sting rays before I called "time" and headed toward the exits. 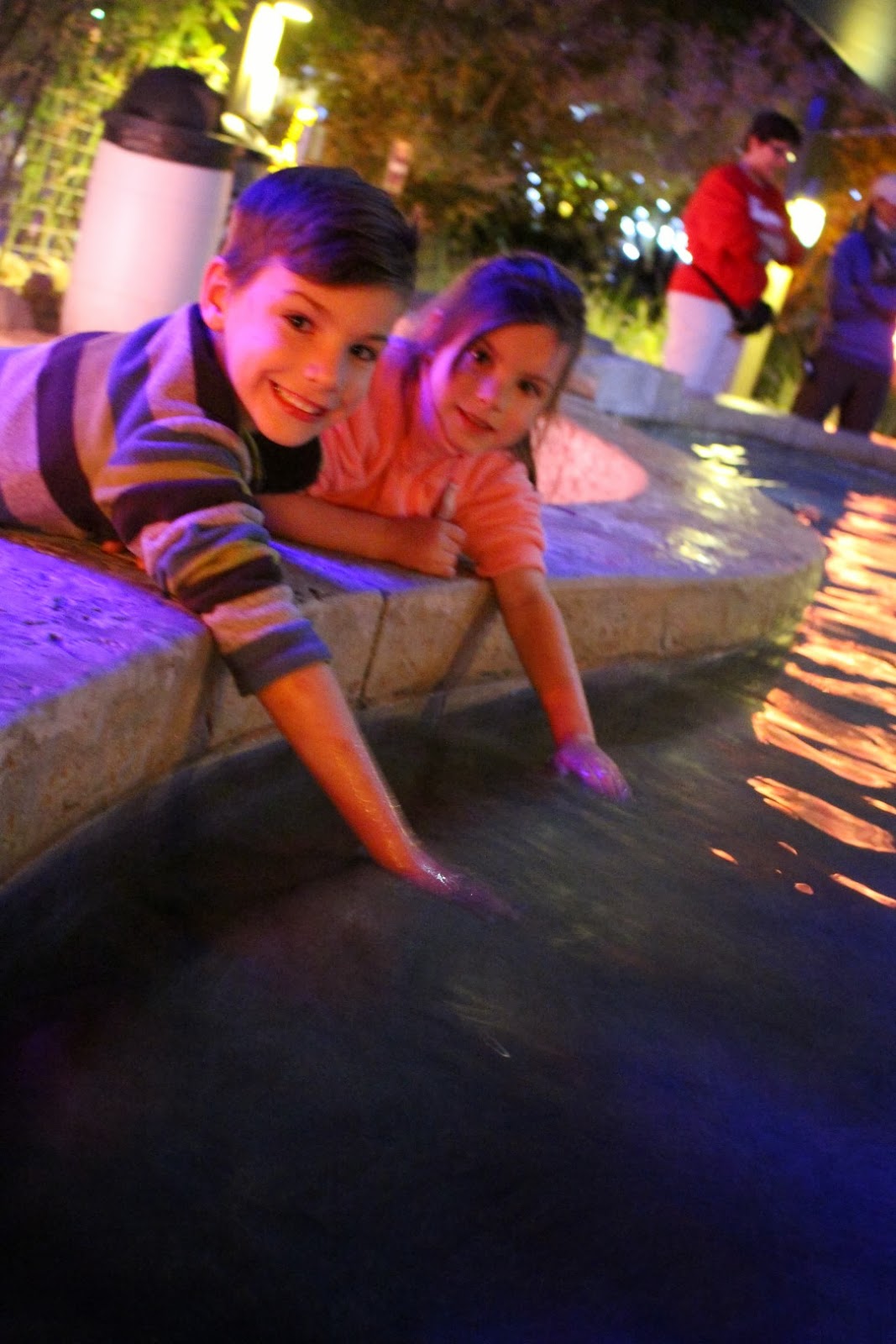 We didn't ride the carousel, camels, zip lines, or wagon, but those were available if we chose to spend the time and money.  Our outing generated plenty of smiles and memories with what we did.  On the way out there is a long bridge where we stopped to admire the hundred-or-so ducks quacking away in the pond below.

The most humorous part of the night was the conversation I had with Easton.  He asked, "where are the owls?"  I told him there was no night display of their area.  He said, "but they are nocturnal!  How can they not have an owl show at night for the only birds that are awake?"  I had no answer for him...  I bet if he grows up to be a worker at the zoo they will have an owl display for zoo lights. 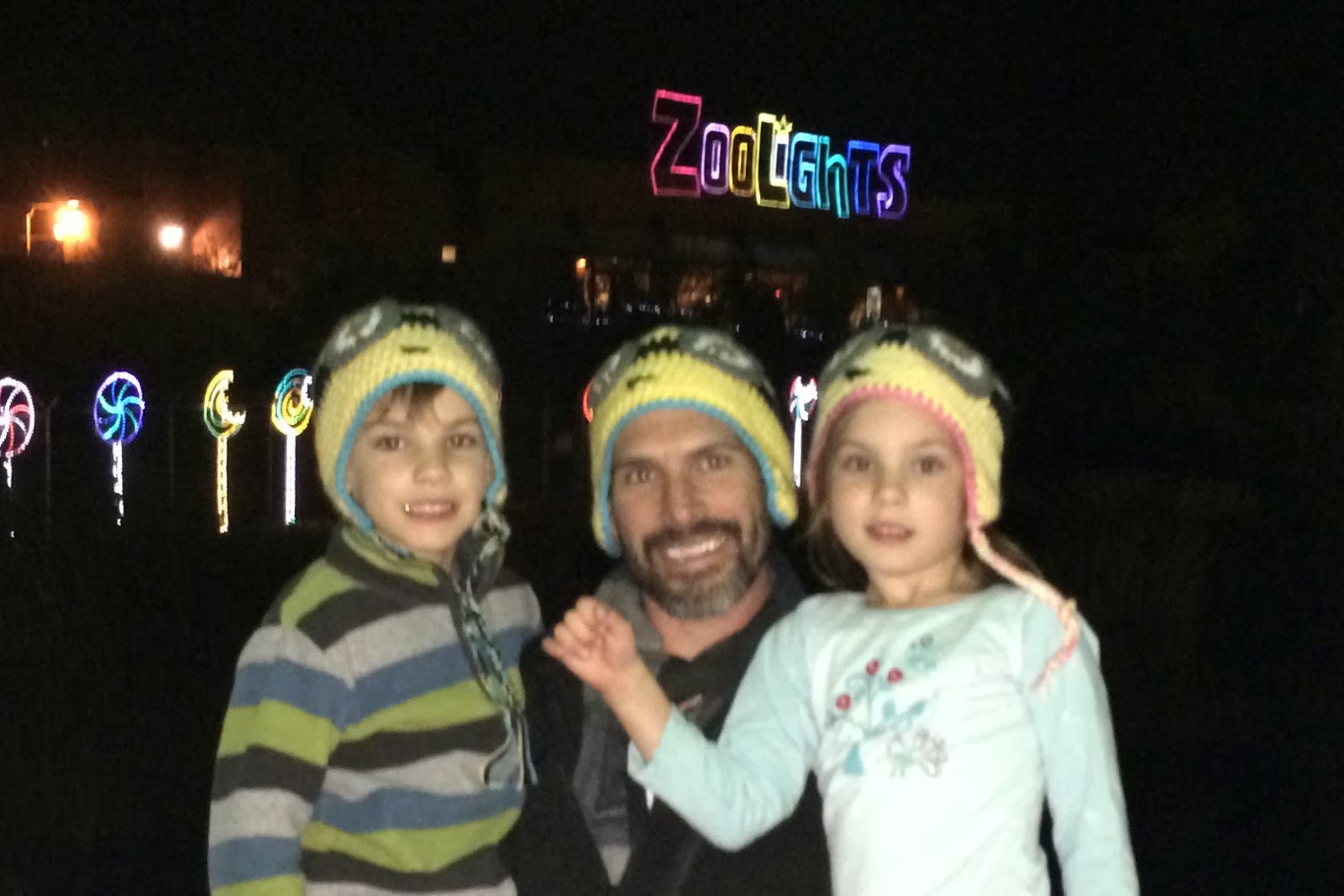 The rest of our little world is getting busier by the day.  My new job role, our church building project, our ministry ramping up at church, and extra curricular activities for the twins will keep us running full speed ahead for the next several weeks.  keep us in your prayers.