We have a whole mess of new adventures in process for the 4 Webbs.  The twins have a small electronic keyboard they've been banging on for a couple of years.  They play on it every few weeks, but now it's time to get serious about learning.  We went to our friend's house for a special occasion.  Cisco and Anna invite one lucky family each year to enjoy turkey tacos with their family.  We were the chosen family and gladly joined them for an evening of dinner and conversation.

After dinner they are only good for a few minutes of adult conversation.  Then they get antsy and look for something to entertain them or occupy their time.  Layla noticed a piano off in the corner.  Easton was uninterested, but Layla asked to go play around.  She gently played a random tune of jumbled notes.  As we were getting ready to leave the oldest son, Jacob, opened the piano seat storage and pulled out this book and these CDs. 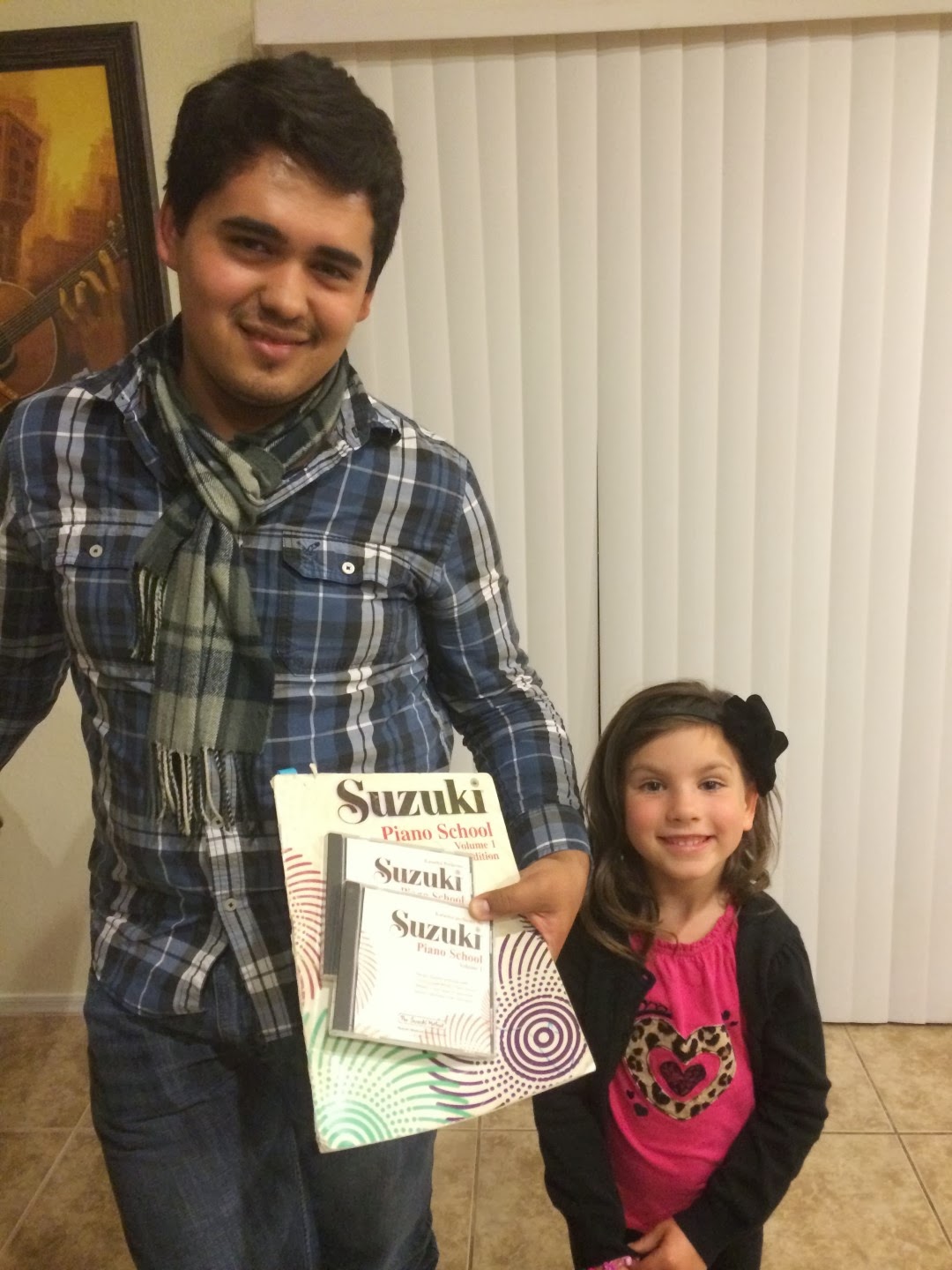 To our surprise he offered to give them to us.  Layla graciously accepted the curriculum and his instructions on how to successfully learn to play with the Suzuki method. 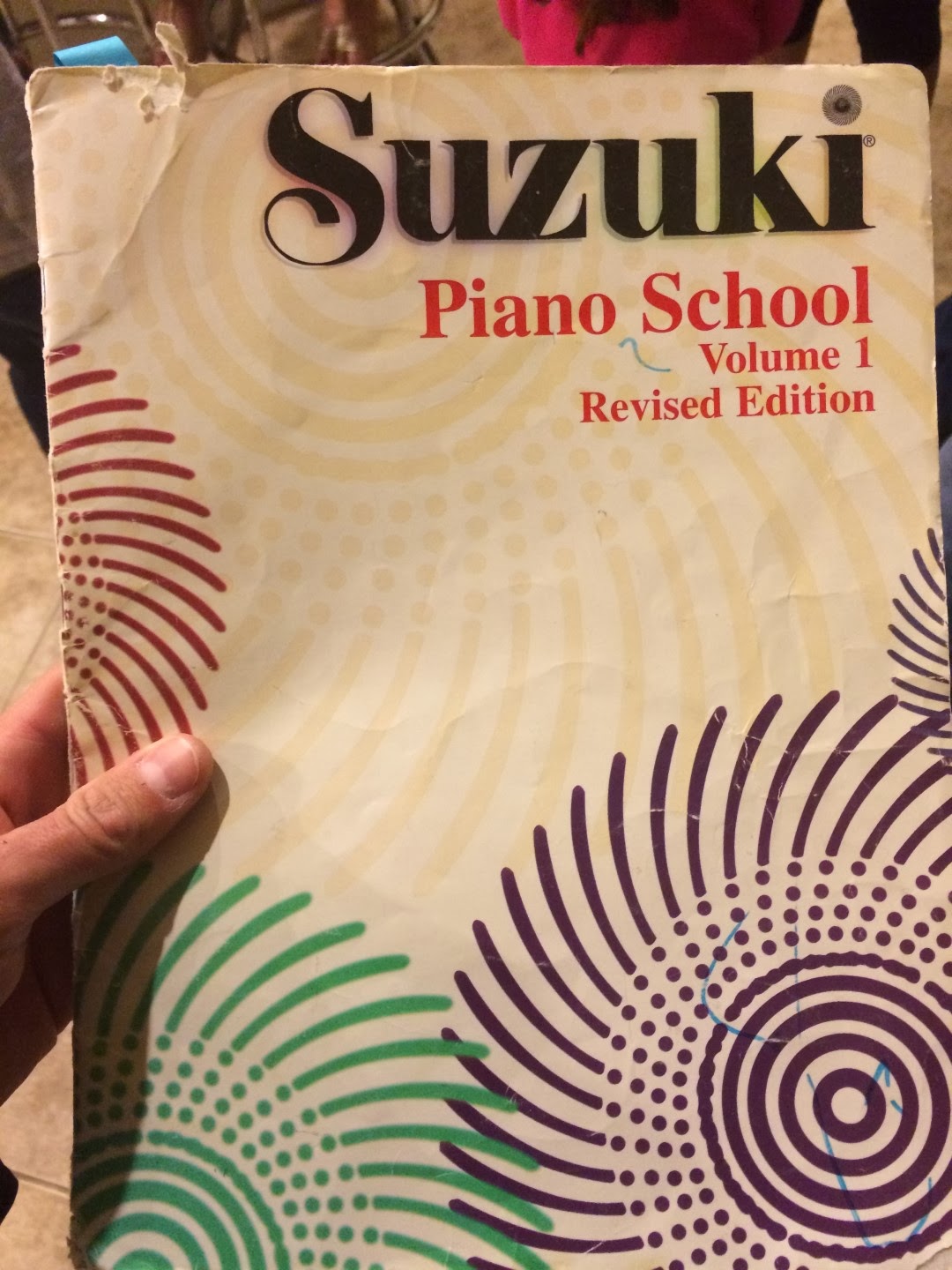 We know it works because he is one of the pianists at our church. 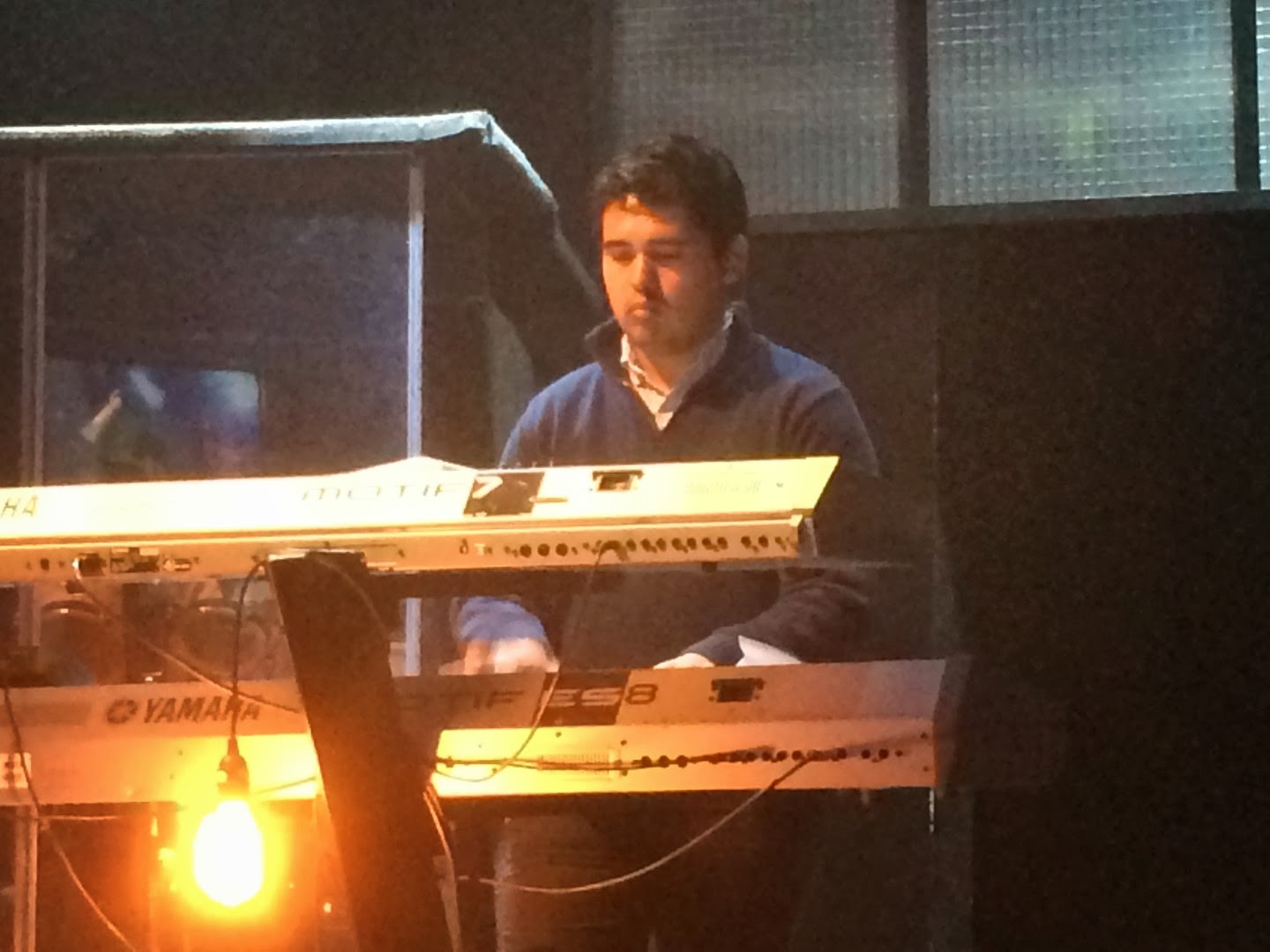 That's proof enough that whatever Suzuki is really works.  The first step is to listen to the hour-long CD of piano music every day for 14 days.  Then, find a teacher who applies this method and get some lessons.  Easton is almost completely uninterested in instruments, but he will learn to play something or sing whether he likes it or not, in time.  It's important to learn music, but it's so much more enjoyable when a child finds an instrument they choose to learn.  We'll see how it goes with Layla's piano playing.

The other new adventures revolve around skating.  Kendra took the twins to the skate park with her friend and her friend's kids.  She didn't get any pics of that, but I also went with them.  They had such a great time that they begged me to take them the next day.  They skate on their three-wheel scooter.  They didn't care that other kids have the Razor scooter or skateboard.  they were just happy to roll around the park. 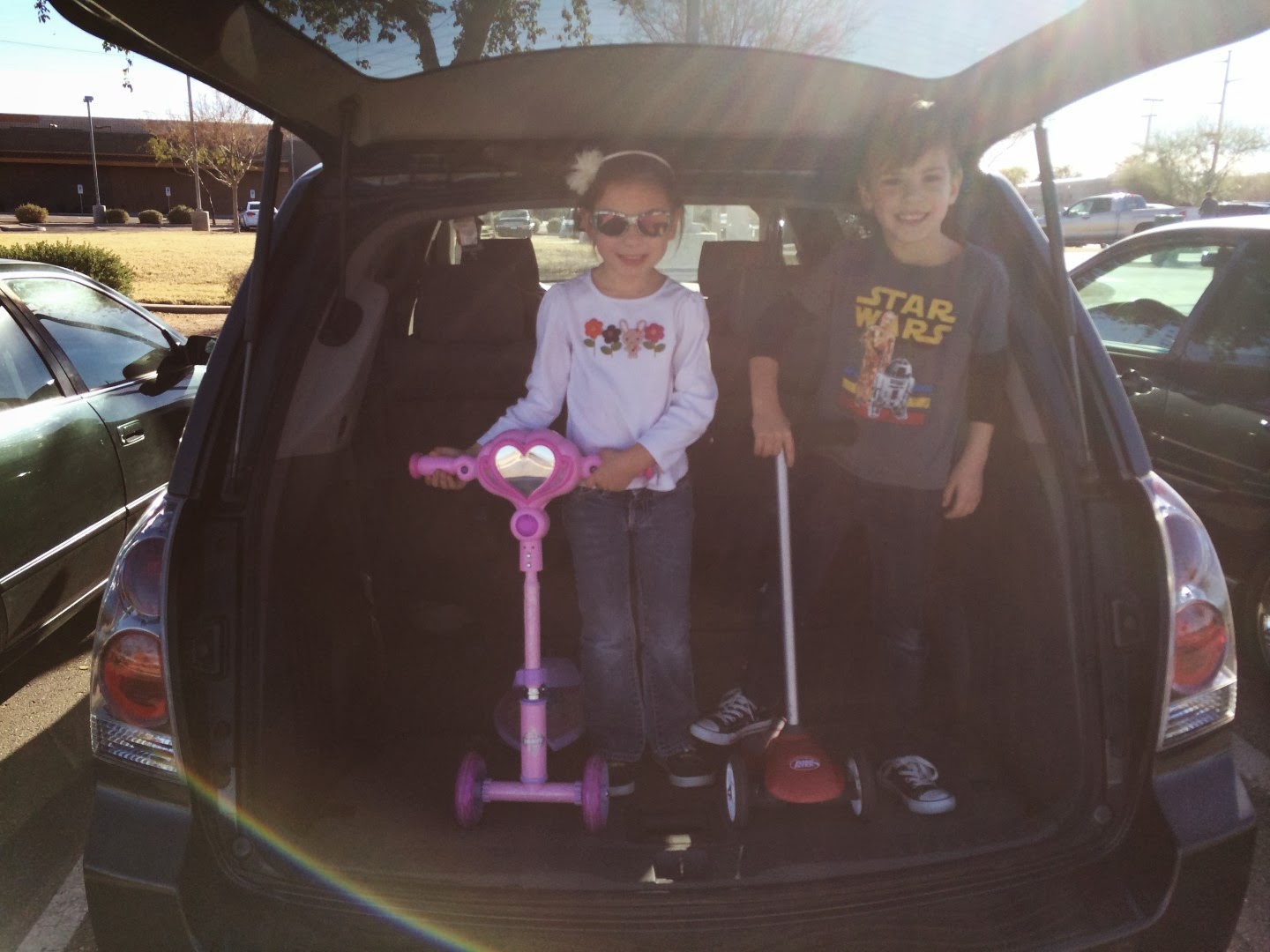 I invited my friend, David, and his son.  He is a long-time skater so I trusted him with my most precious kiddos.  He offered to do a tandem ride to give the twins a sense of what it feels like to ride a skateboard through the park. 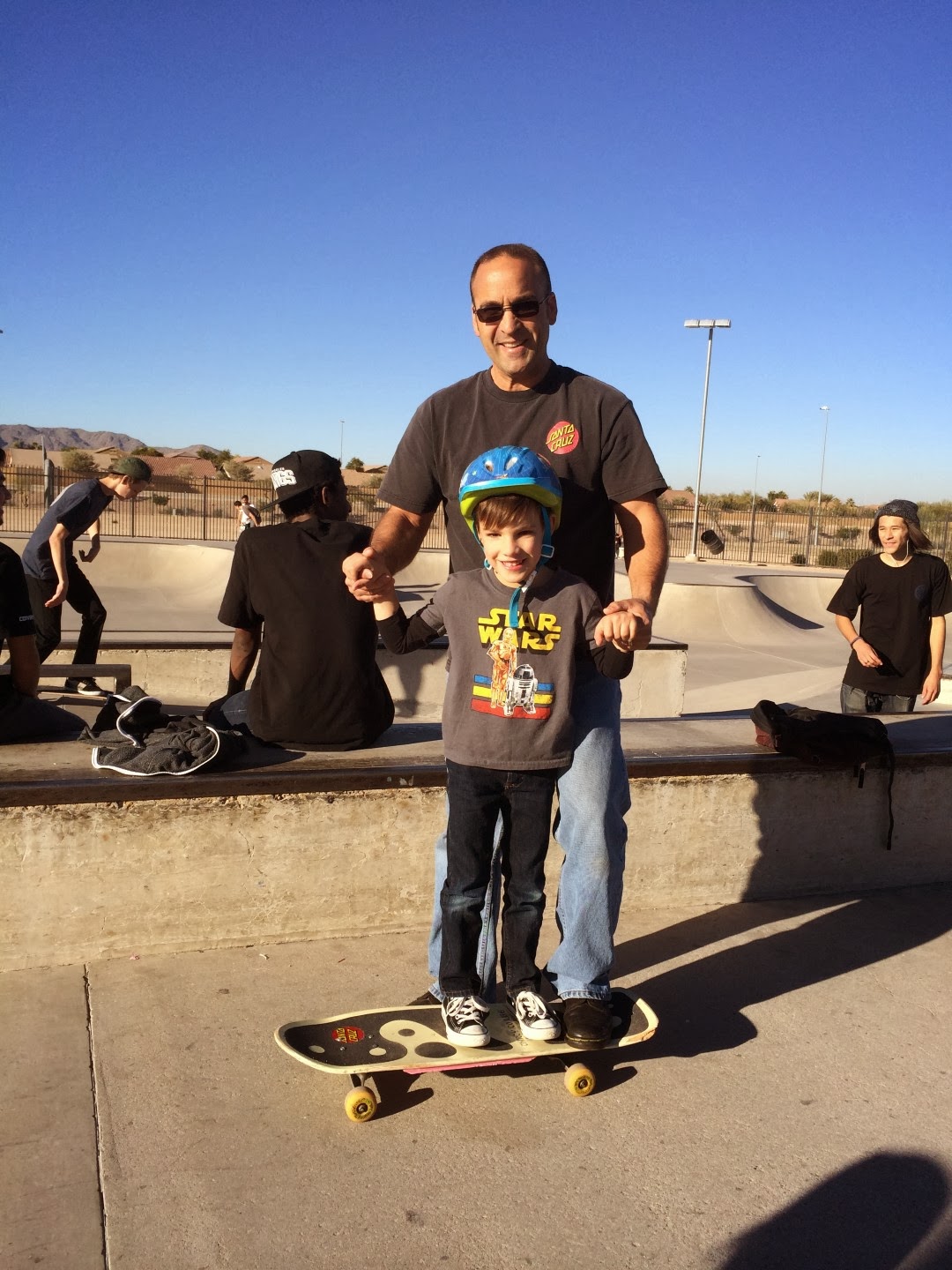 They smiled and giggled with excitement.  When they experience something like this they believe it is possible.   That's the first step towards accomplishing anything.  I am not a big fan of broken bones or hospital trips.  Luckily, neither are the twins.  They also aren't adrenaline junkies so I'm not worried about this turning into X-games danger level. 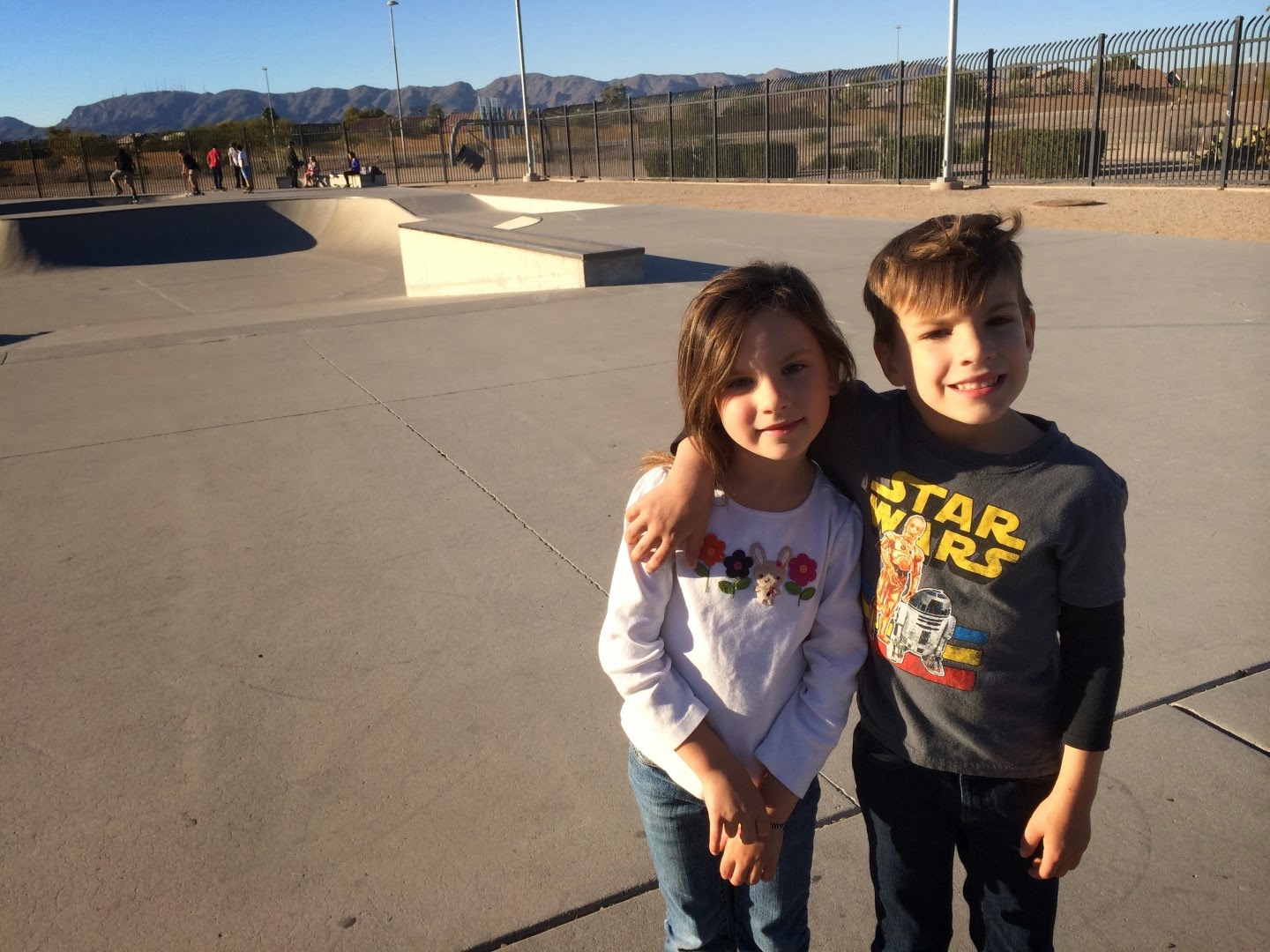 Back at home they are too big for their bicycles and too small for the mid-sized ones we were given by a neighbor and our church friend.  They are in this in-between stage where training wheels are still required because they are too scared to ride without them.  Yet they aren't big enough to handle the 20 inch wheeled bikes yet.  At least they have their Y-bikes to fill the gaps.  They show off for neighbor kids by riding backwards and through the rocks.  Nothing wrong with enjoying what you have and being proud of it. 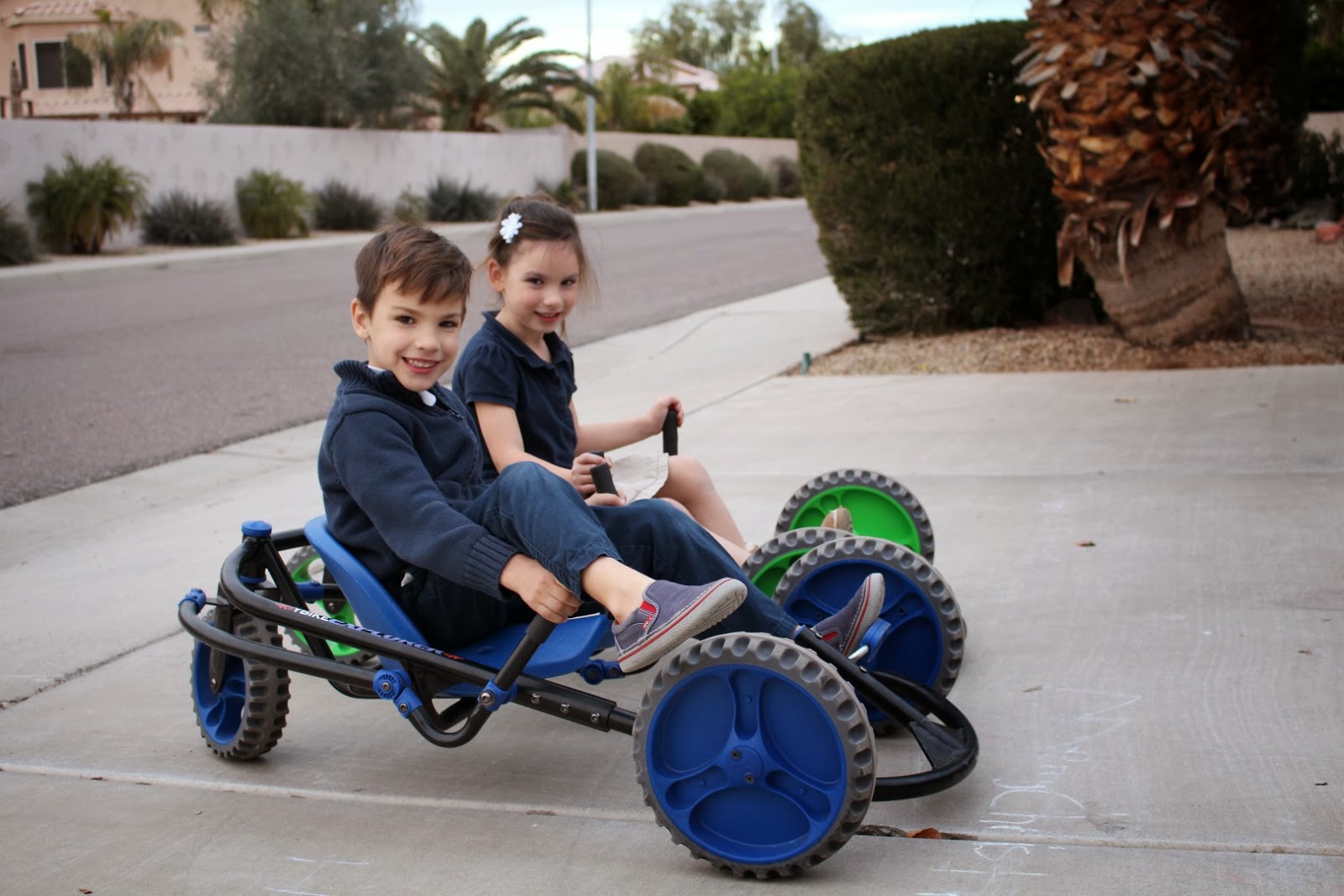 They are getting more adventurous at the playground now.  Thank goodness times have changed to discontinue metal slides that burn your skin off as you slide down.  There is still some element of danger though as they climb plenty high to hurt themselves if they were to fall.  I gladly let them climb! 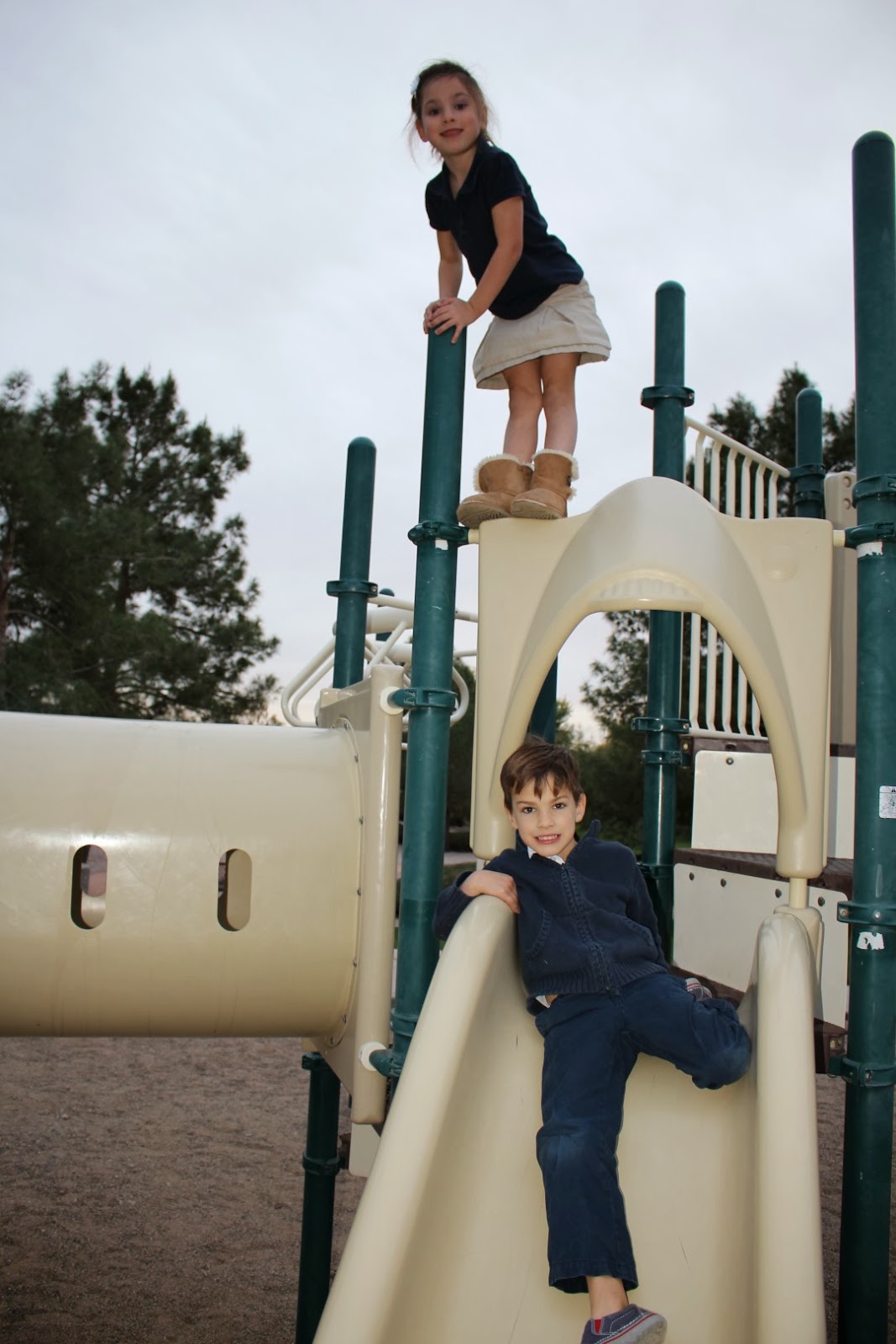 It's good to give them the freedom to take chances and learn. 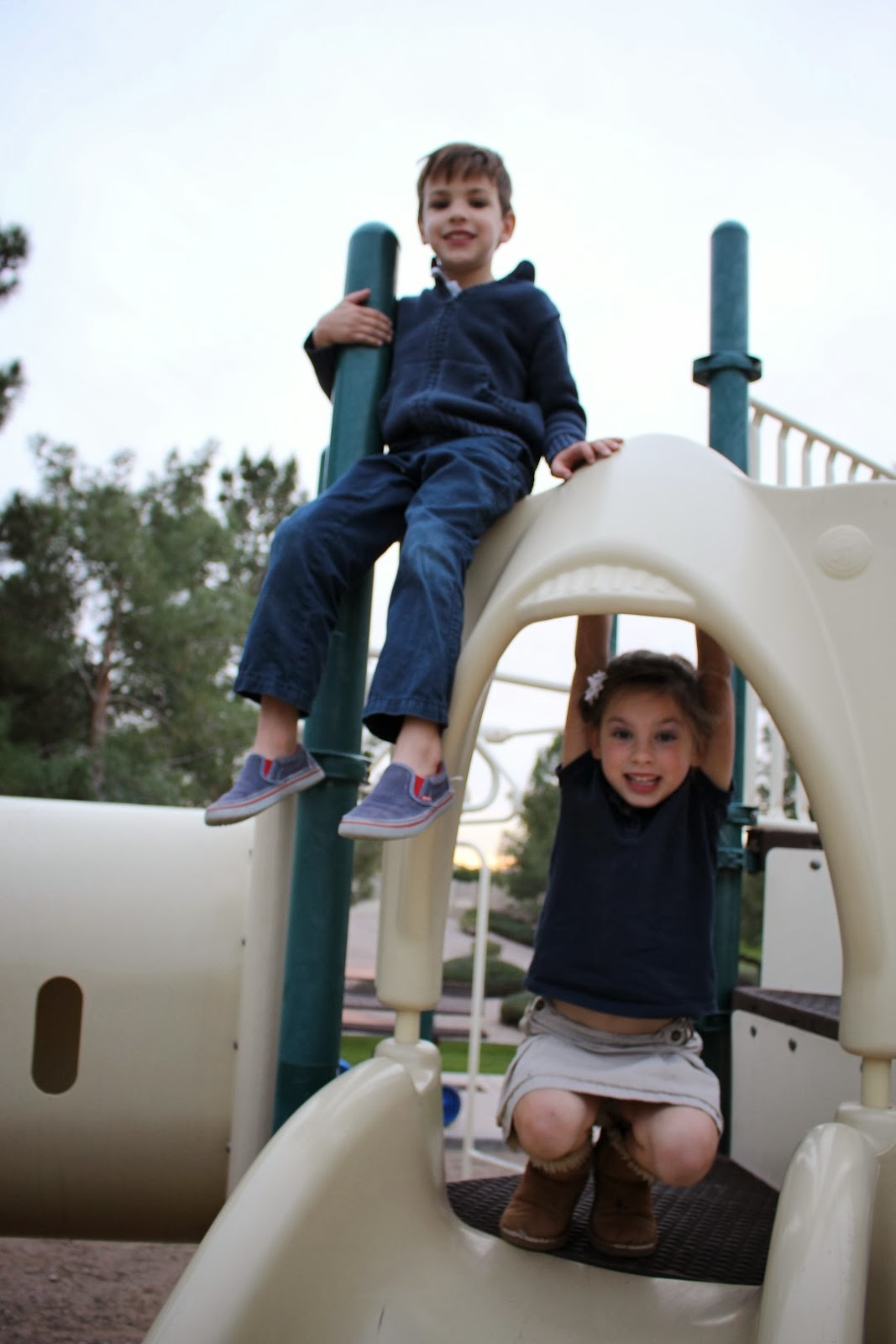 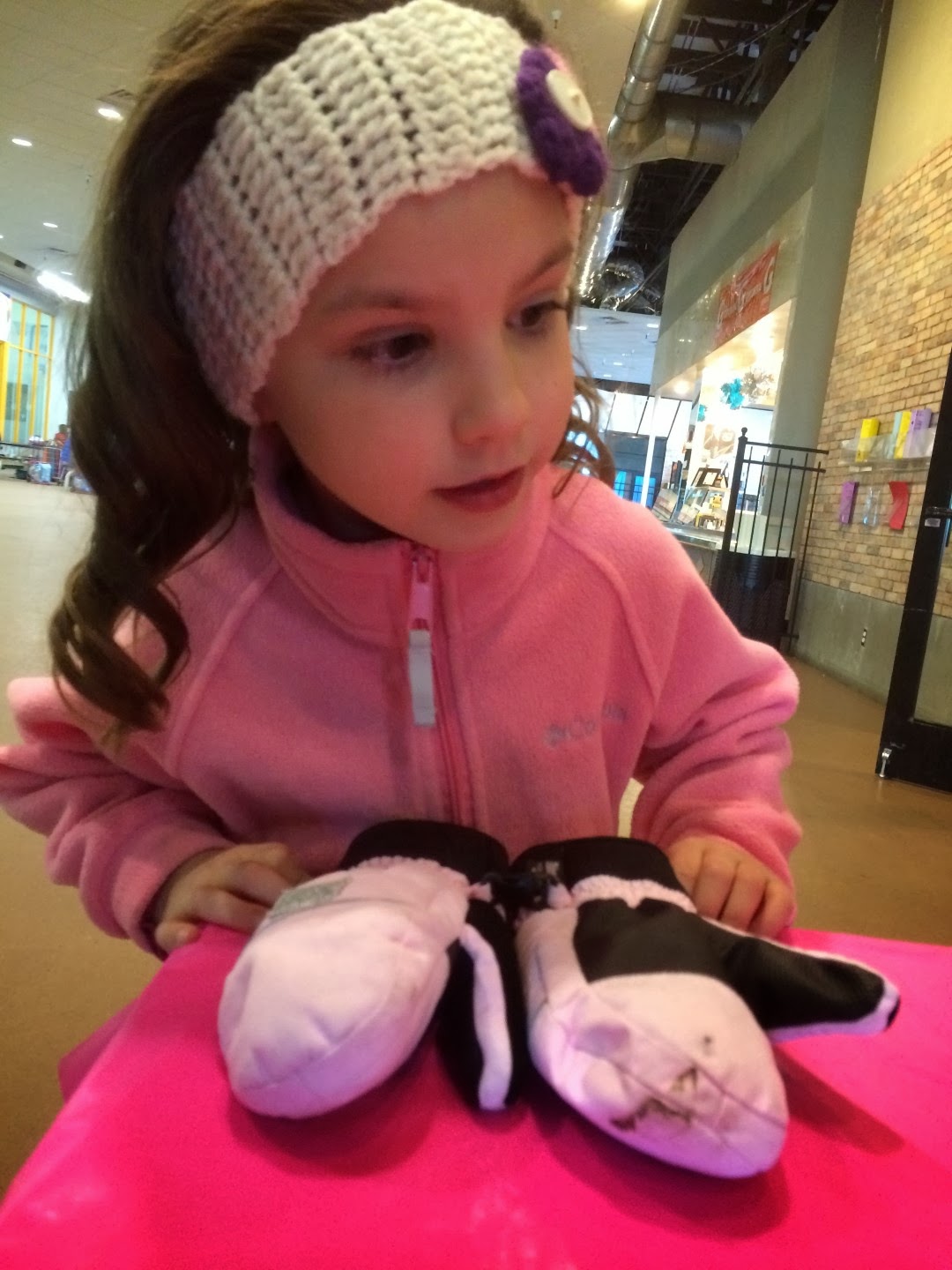 I skipped out on a late afternoon work meeting so that I could enjoy Layla's first day on the ice.  As we were signing up, the lady helping us said, "I've never seen a girl so excited to skate before!" 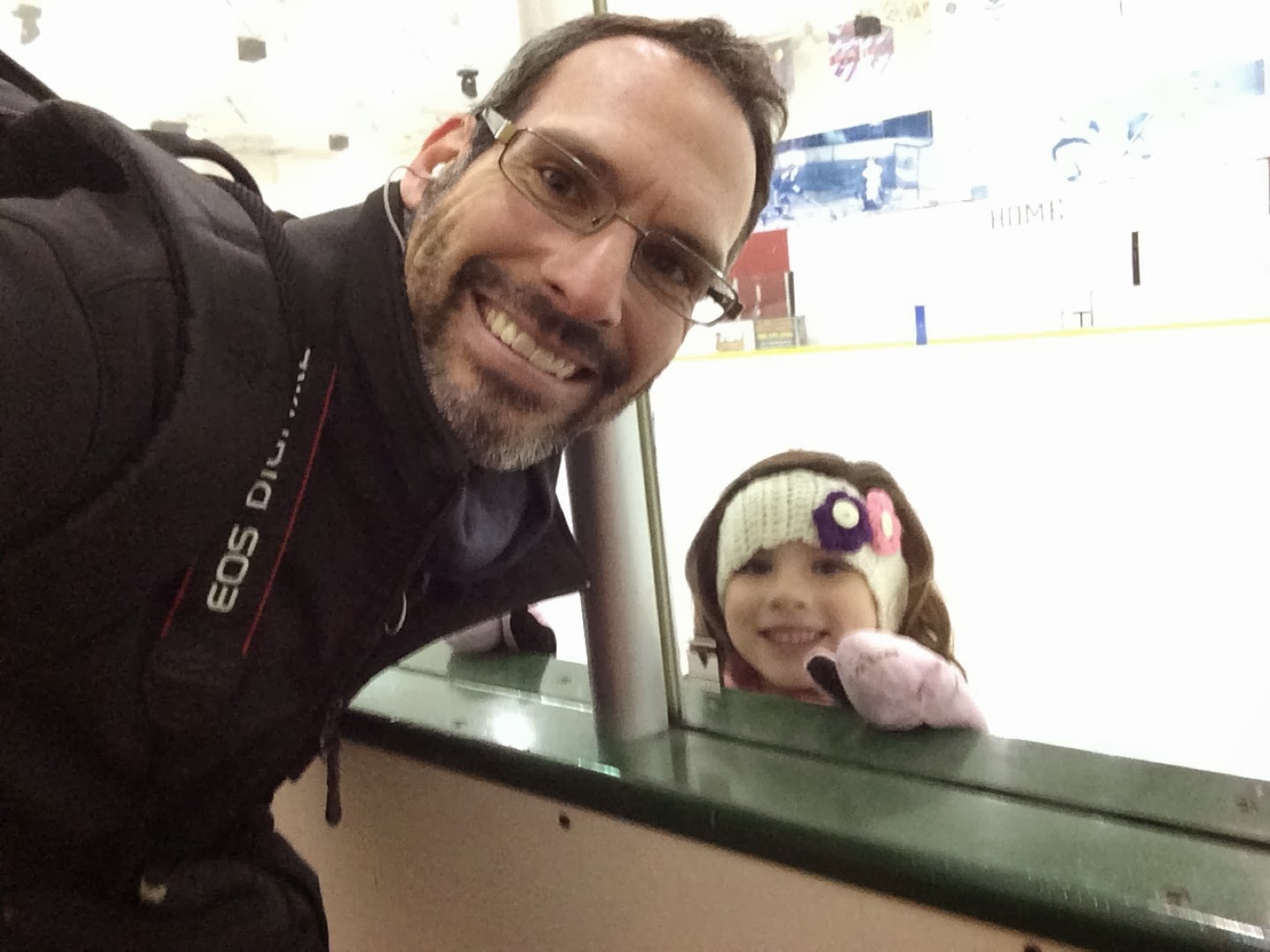 We showed up early because I didn't know what to expect for getting her signed up.  She went straight out to the ice where kids were twirling and skating.  She stepped out onto the ice and befriended three other little girls who were not rookies. They asked me, "can we teach her how to skate?"  I agreed and off she went.  By "off she went" I mean she hung onto the side railing and monkey-walked her way down the row. 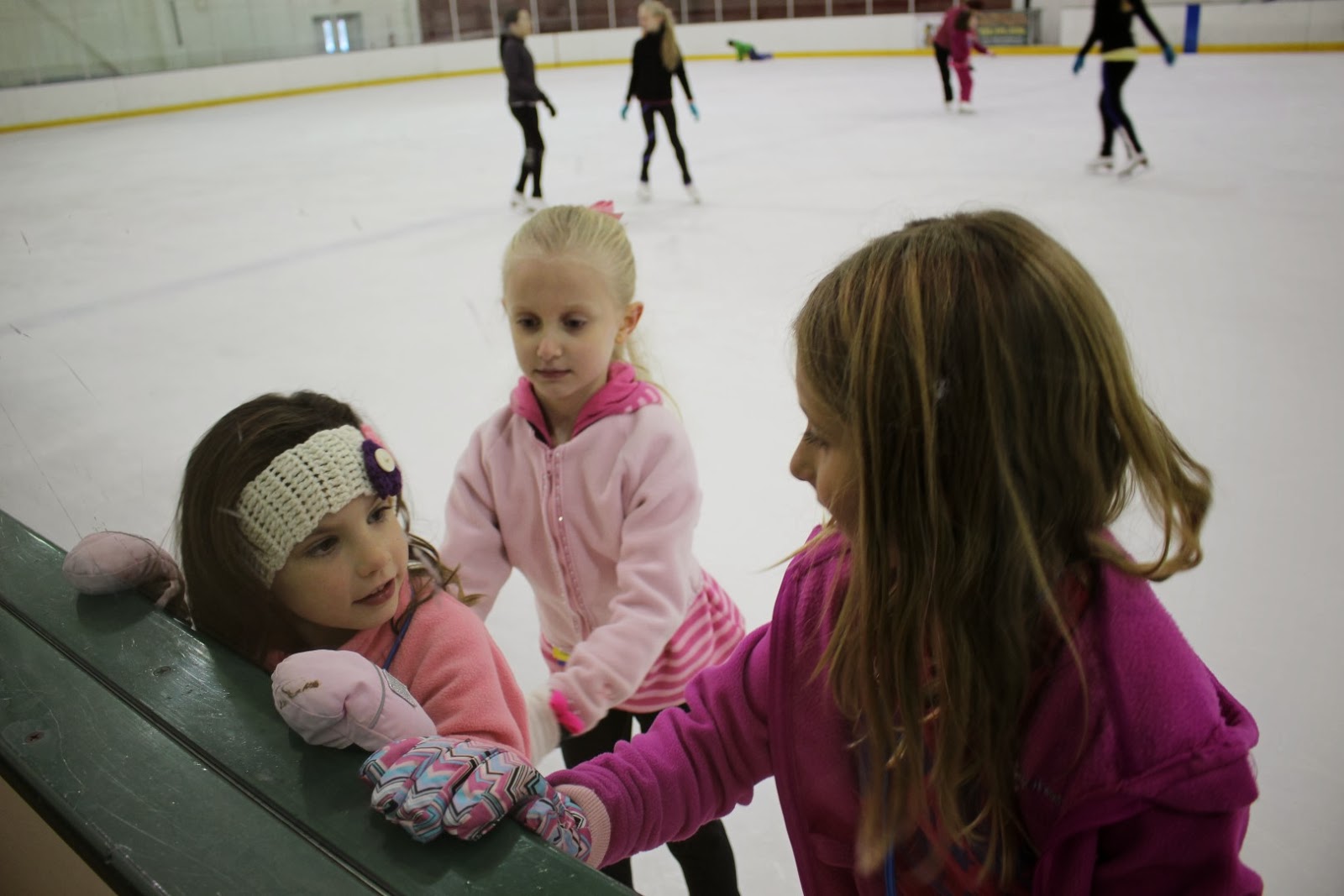 She came back slowly so I could get her picture and cheer her on. 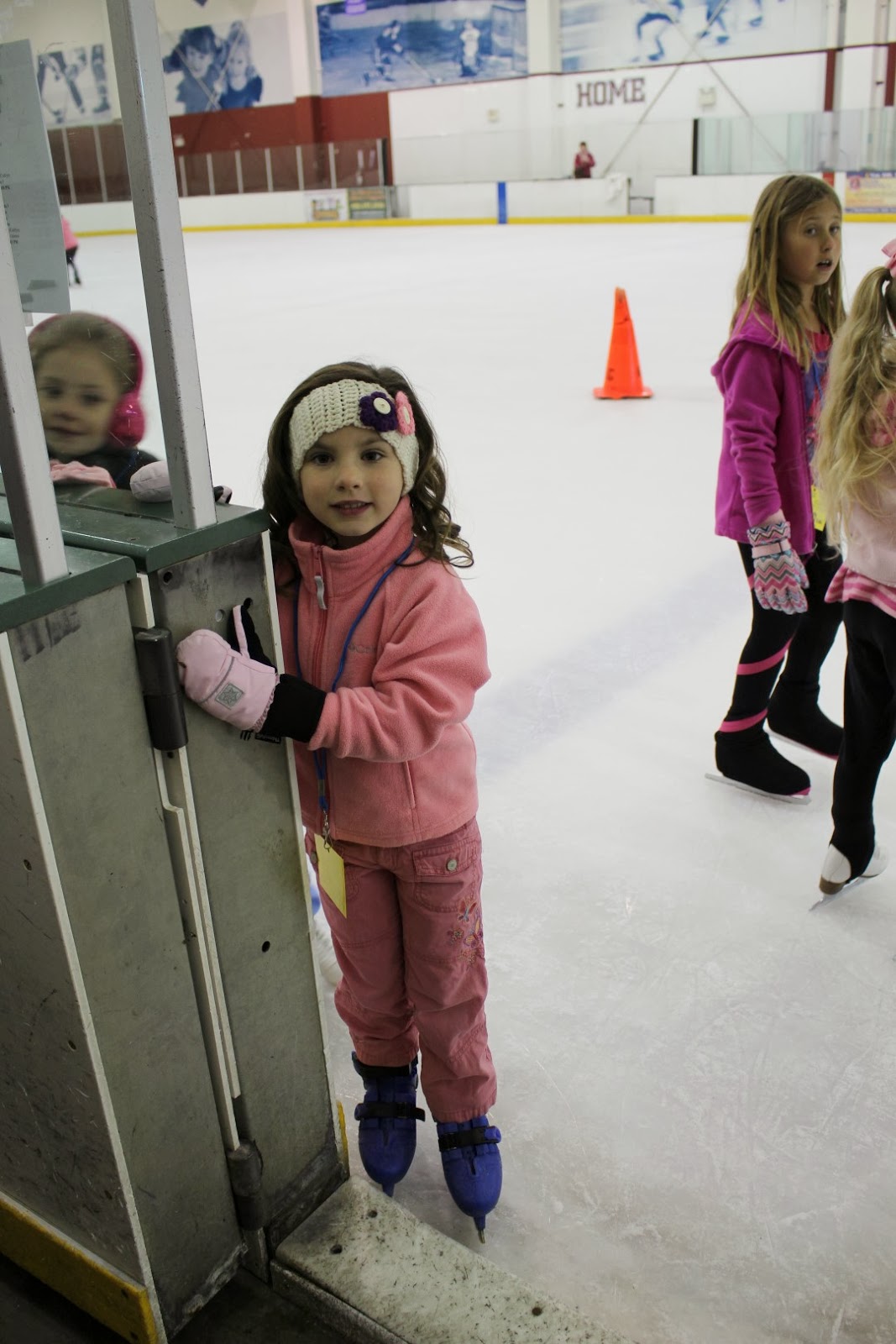 Then it was time for her real lesson.  It is supposed to be a group lesson, but the 4-year-old on the right of this next picture was the only other person in her newbie group.  He was bundled up like the stay-puffed Marshmallow Man.  He cried non-stop until his mom finally gave up and left.  Worked out great for Layla!  personal one-on-one lesson with a very nice teacher.  They practiced falling as a skill in the foyer. 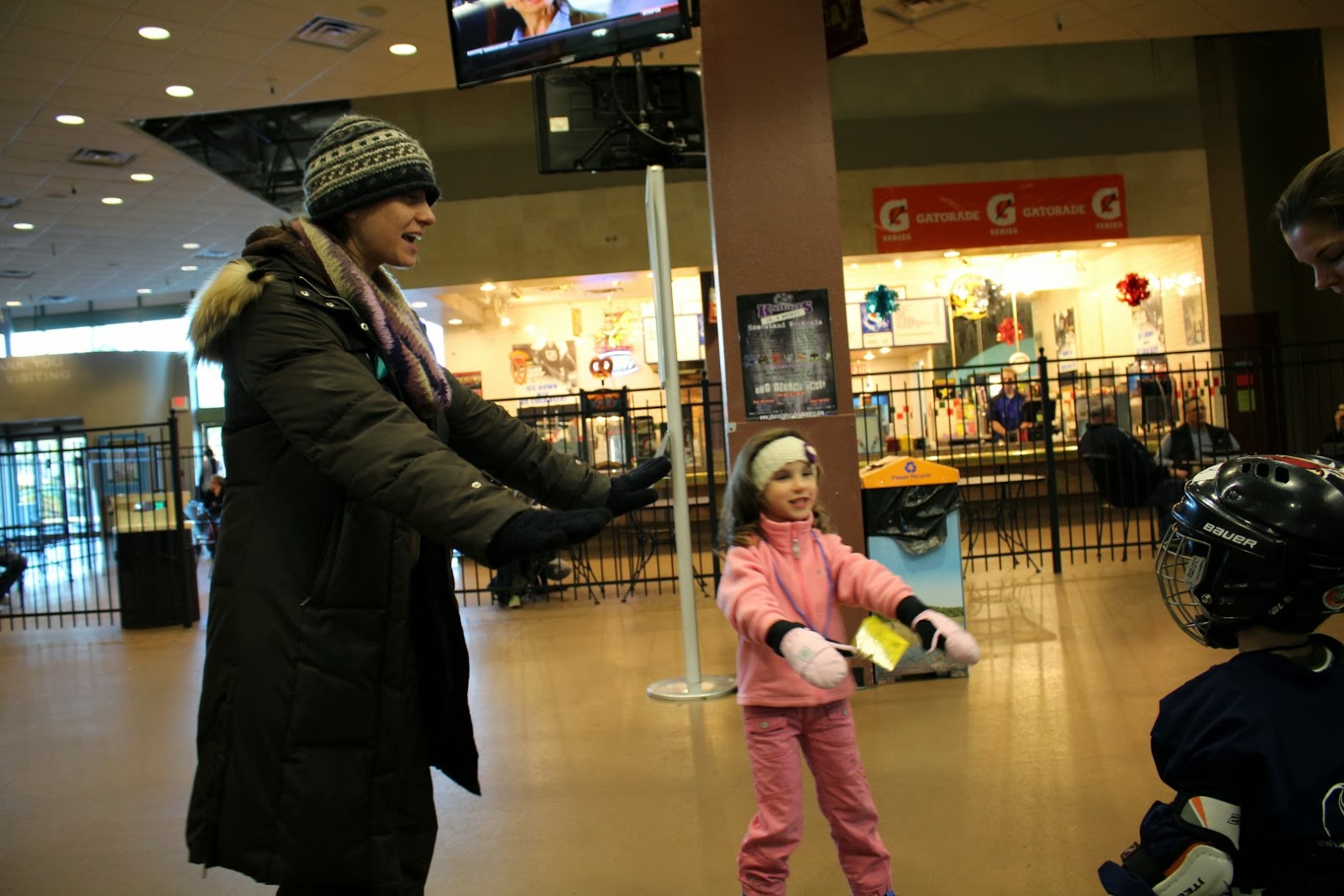 When Layla learned to properly fall they went out for a first run across the ice.  Layla was not scared one bit, but she just had no skills to draw from.  She started exactly where every olympic skater in the world starts:  at zero. 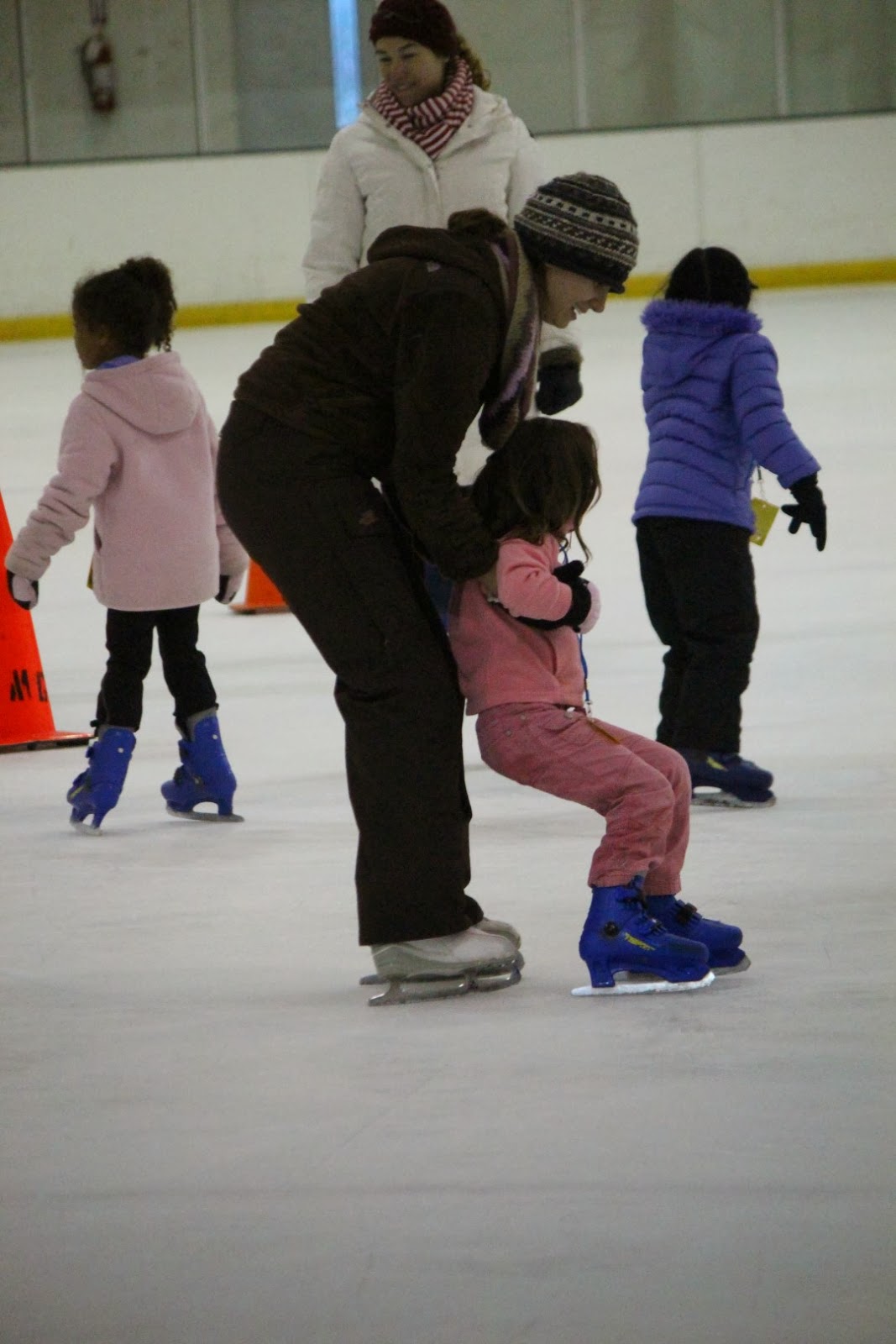 Ten minutes into the lesson Layla was already on her own! 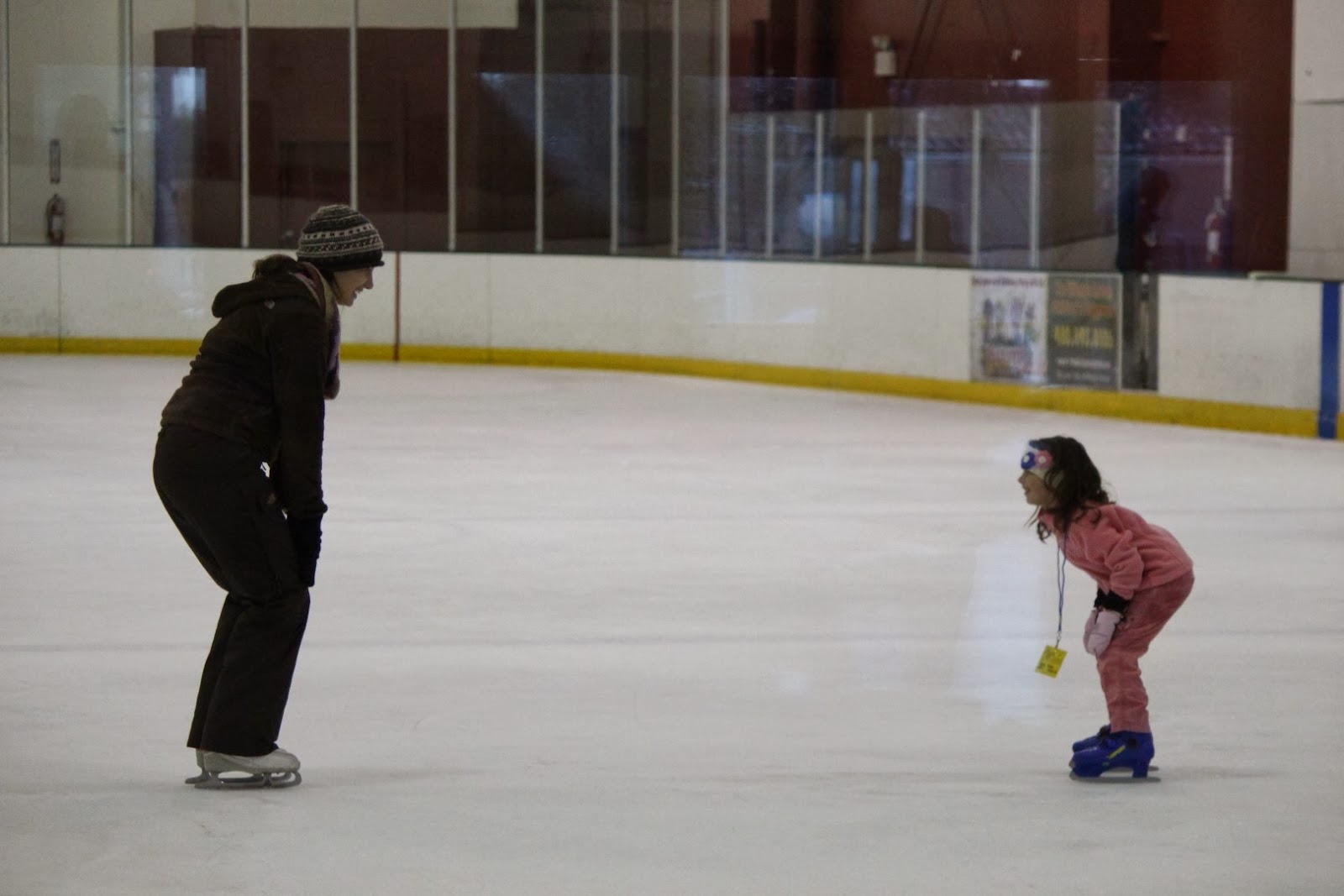 Layla was continually facing side-to-side so I didn't get many direct shots.  However, her smile is so big in this next picture that there it is visible even from the side. 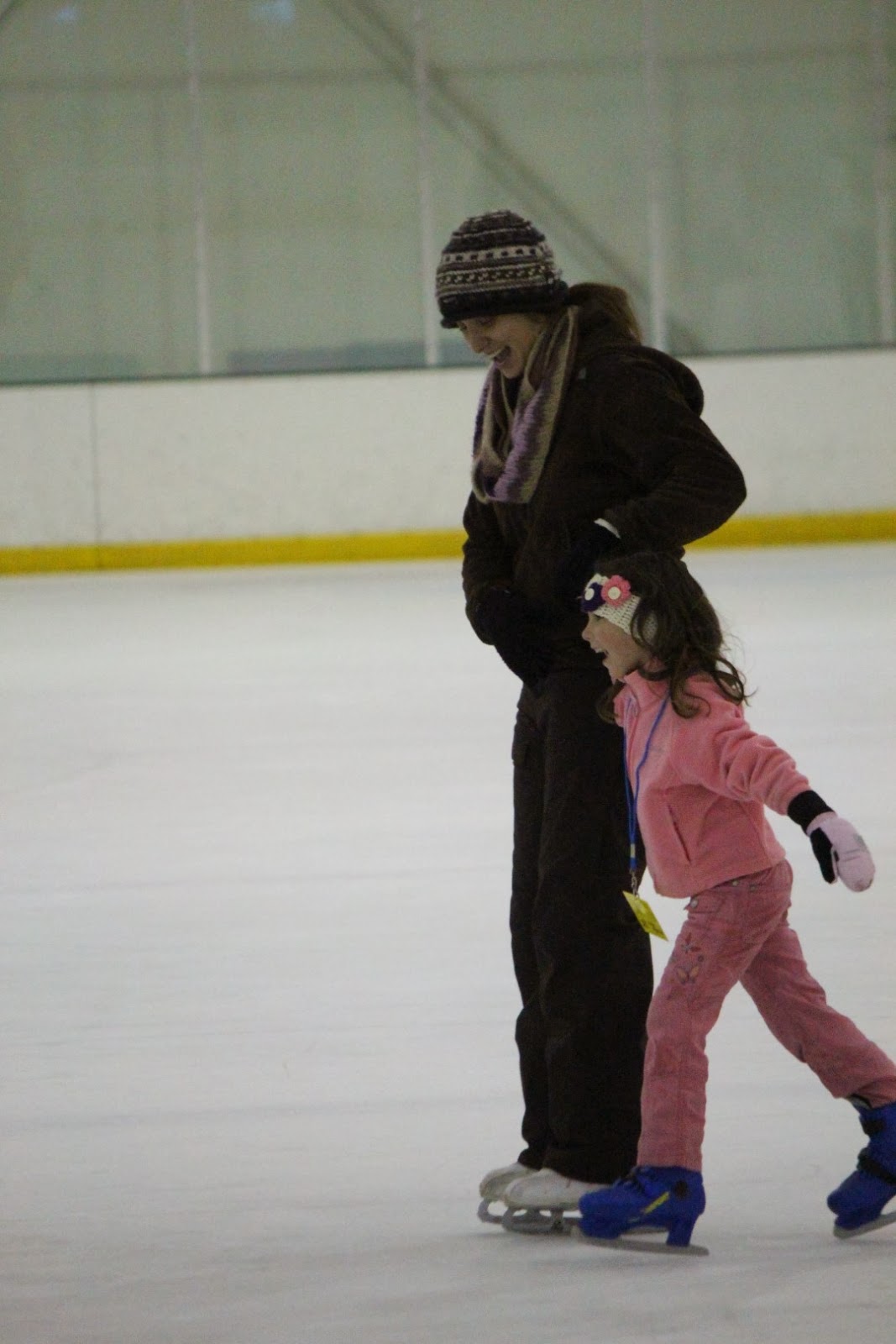 She was in heaven.  Her own little magical world of success; one glide at a time.  Layla stopped to wave when she saw me watching her on the other side of the glass. 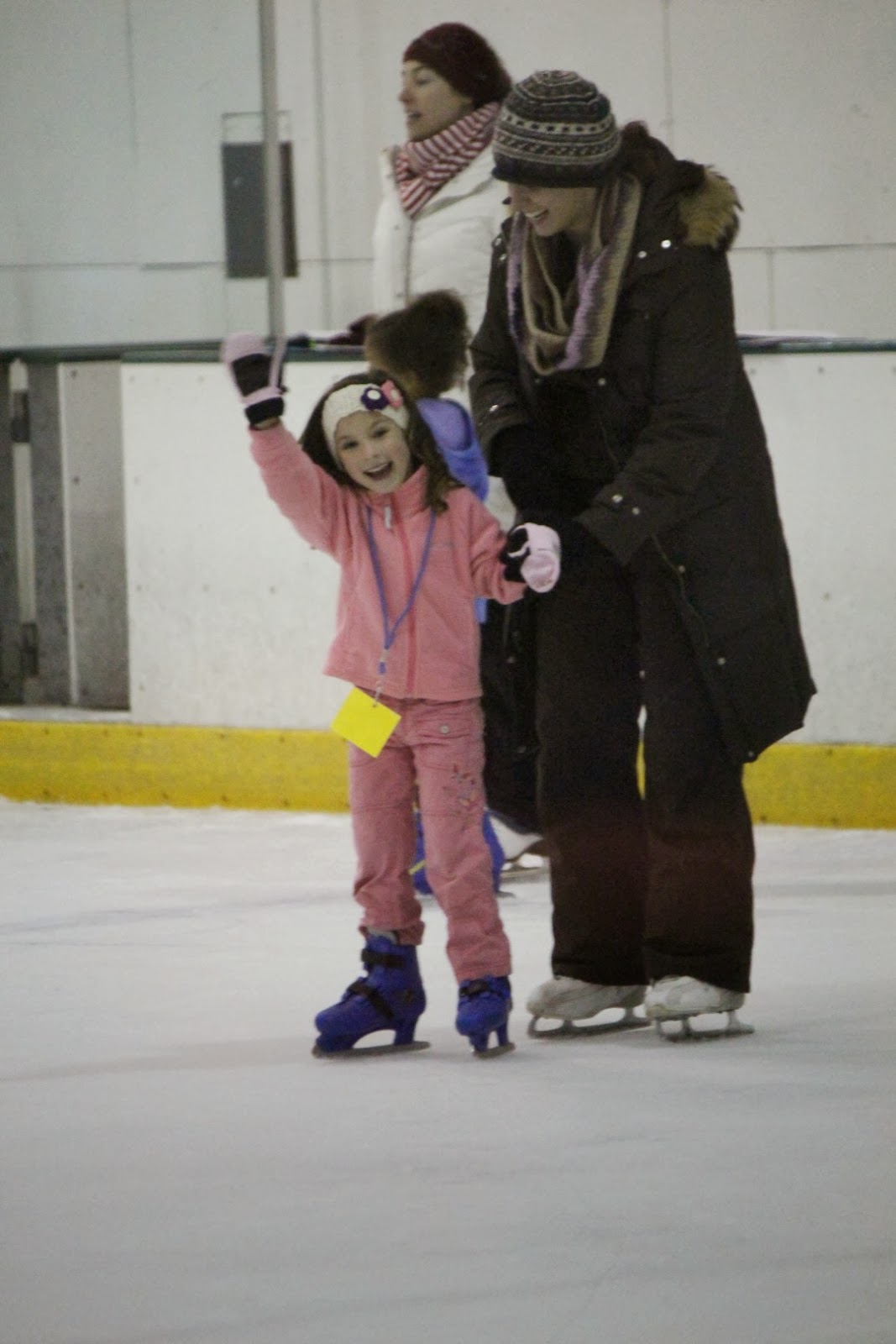 Layla sometimes gets the "I'm an expert" attitude about 10 minutes after taking on a new sport or capability.  Not so, on the ice.  She was attentive and followed instructions very well.  I could see, without hearing, enough to recognize her focus and willingness to learn. 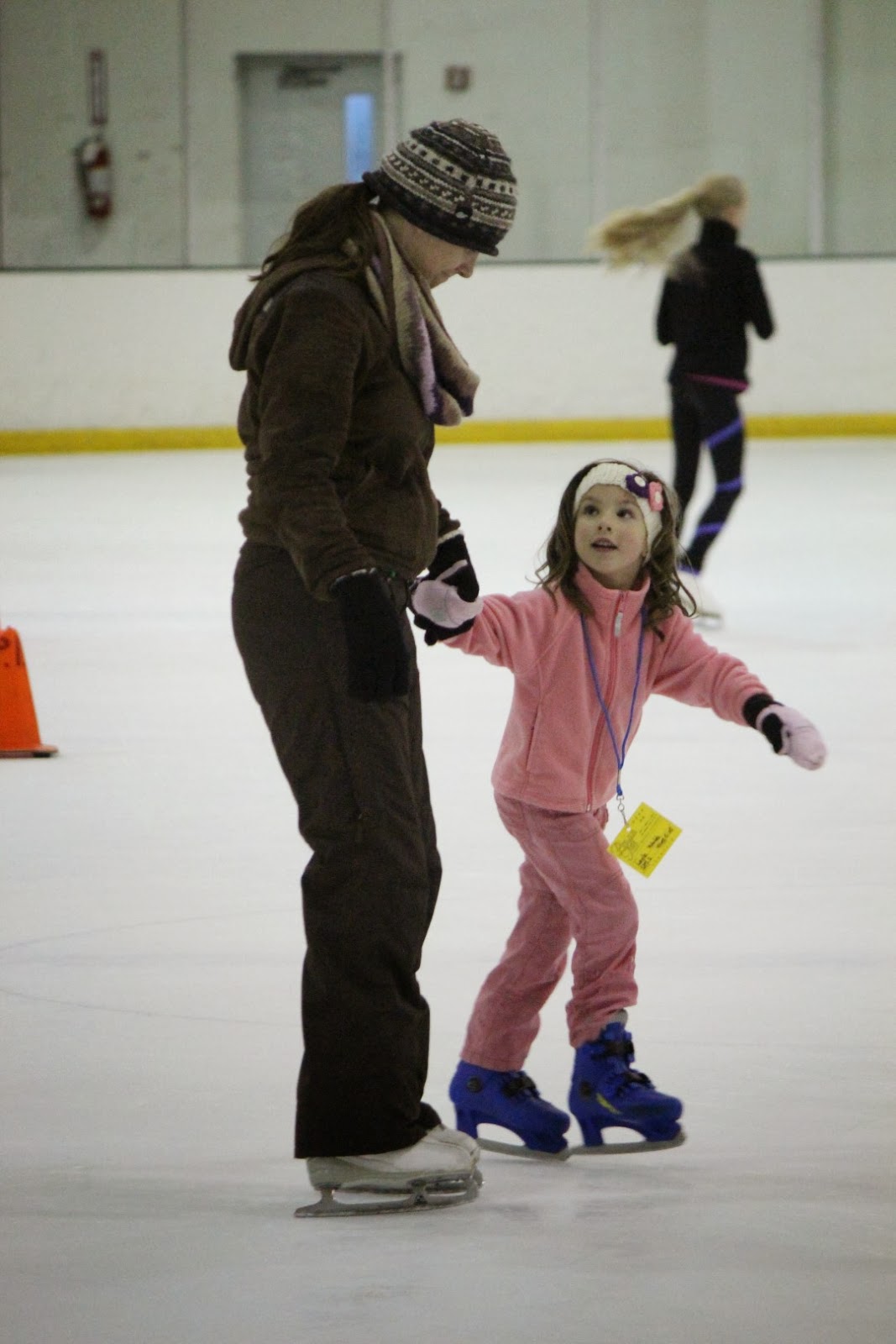 Towards the end Layla's teacher spun her around in circles so that she could feel what it is like to spin on the ice.  That made her day. 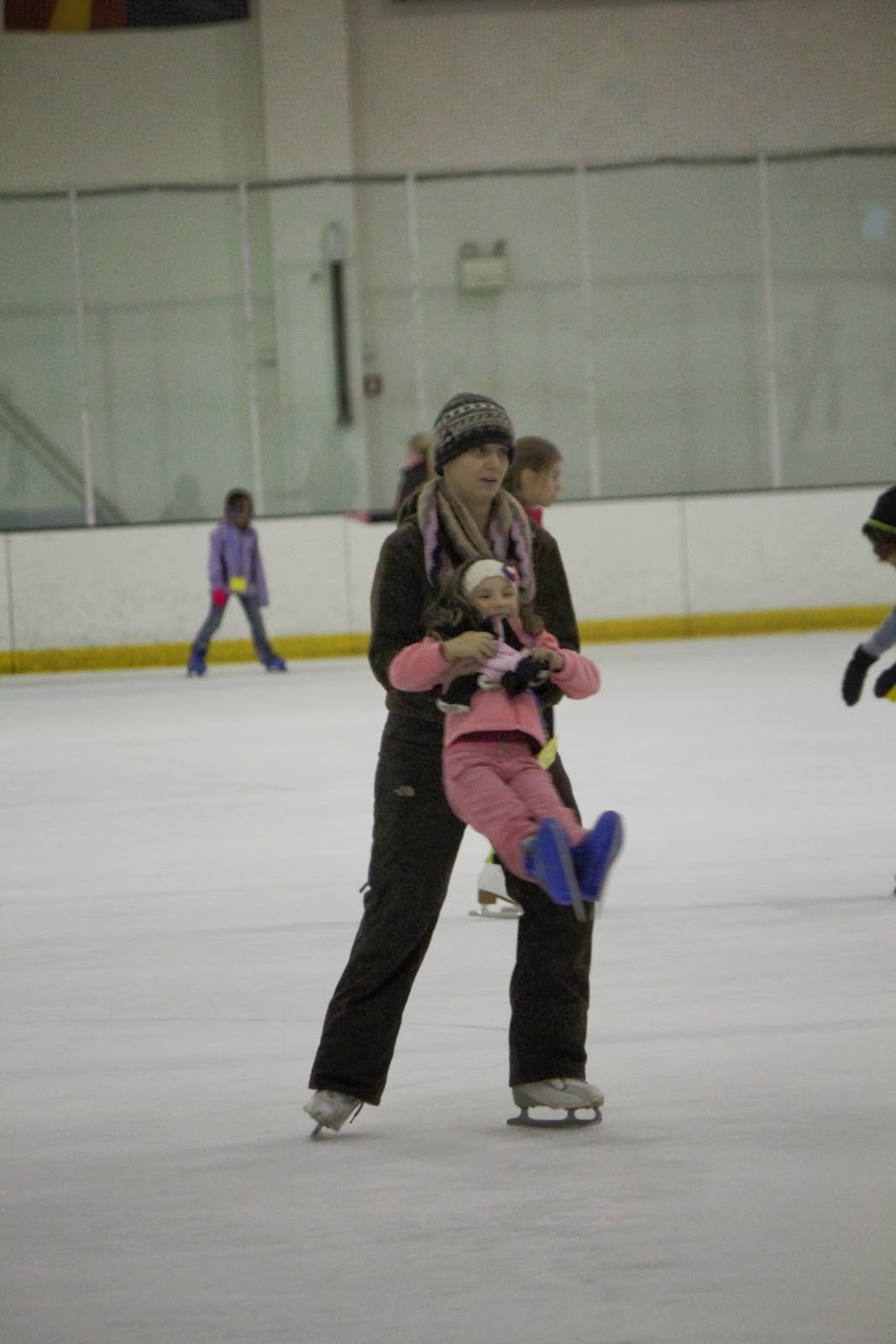 Afterwards I met with the instructor to find out what gear we need to buy so she can be successful.  She said we have everything we need and then commented on Layla's enthusiasm.  She said, "I've been teaching for over 15 years and I've never seen a girl so enthusiastic about skating for the first time."  I take that as a compliment.

We added her weekly lesson on the fridge calendar.  She checks every morning to notice how many more sleeps until she gets on the ice again.  I'm not sure how far she will pursue ice skating, but I'm certain she will last through the 8 weeks of lessons.

Next week is Easton's first golf lesson.  'Tis the season!