Seeing Themselves In Utero

Almost 6 years ago we welcomed Easton and Layla into the world.  Because twins is considered "high risk", Kendra had ultrasounds every few weeks throughout her pregnancy.  It bothers me when couples say "we're pregnant!"  No, dude, you aren't.  If you die tomorrow SHE is still pregnant.  It's simple logic...

Anyway, we've been hanging onto the ultrasound videos waiting on the day when Easton and Layla would be old enough to understand what they are.  Well, today was the day.  After a lazy morning with just the 4 Webbs we ate breakfast and then had a few minutes of down time.  I ran across the ultrasound vidoes the other day and was waiting for just such a break.  This is Phoenix.  We don't have the proverbial "rainy day" to wait for these kinds of things.

I explained what the video was before we started and they were fascinated.  The screen shows "Twin A", which represents Layla.  Easton kept asking, "Where is Twin B?"  he waited patiently while Layla saw her own face from the inside of Mommy's belly.  She ran up to the TV to point out the heart, ribs, feet, and her angelic face. 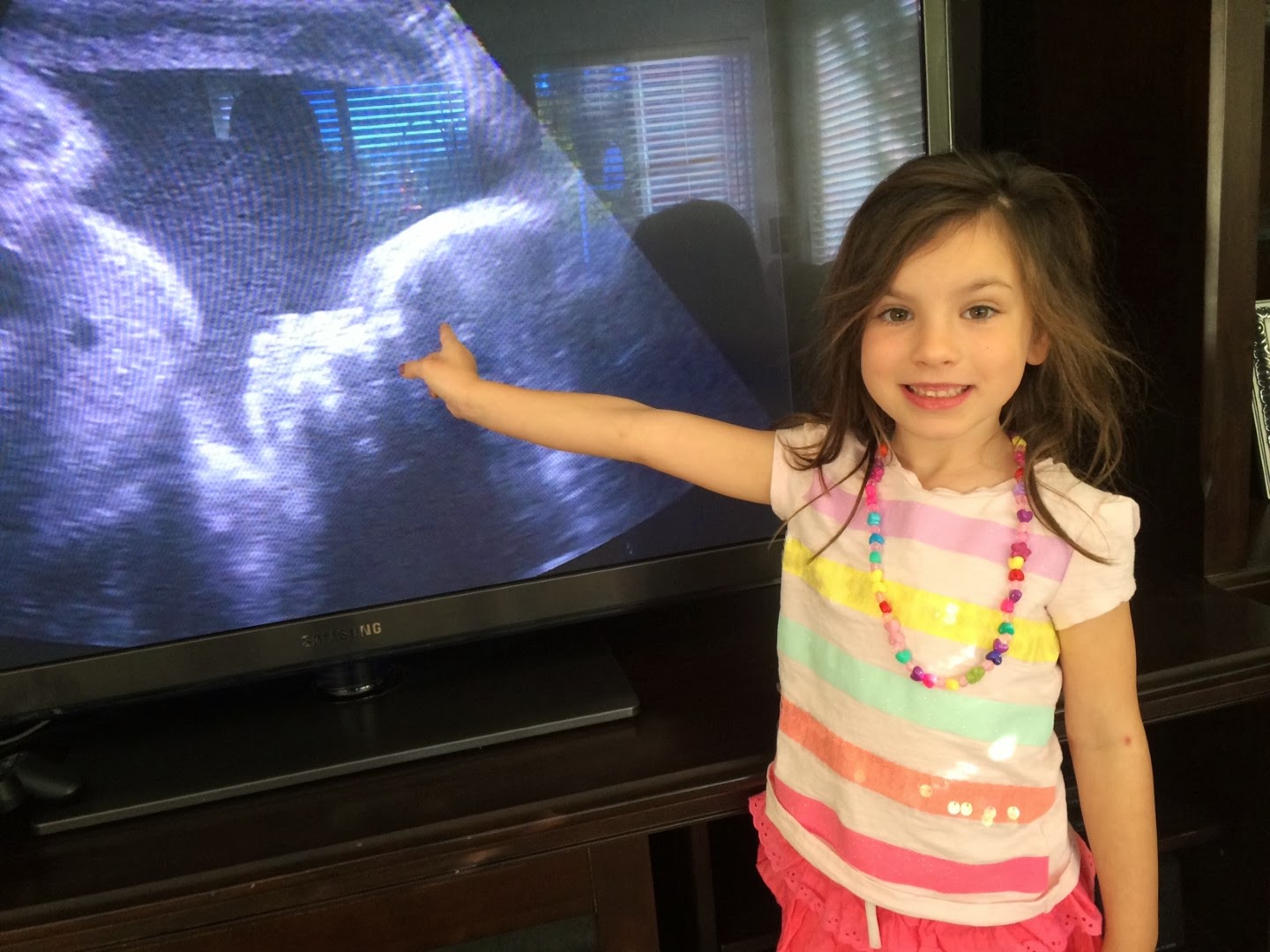 At the end of this one they did a 3-D model for each of them.  The image is of Layla, but Easton was amazed to see Layla's sweet baby face in 3-D.  His 3-D didn't show up as well because Layla's foot kept bothering the imaging equipment as it scanned his face. 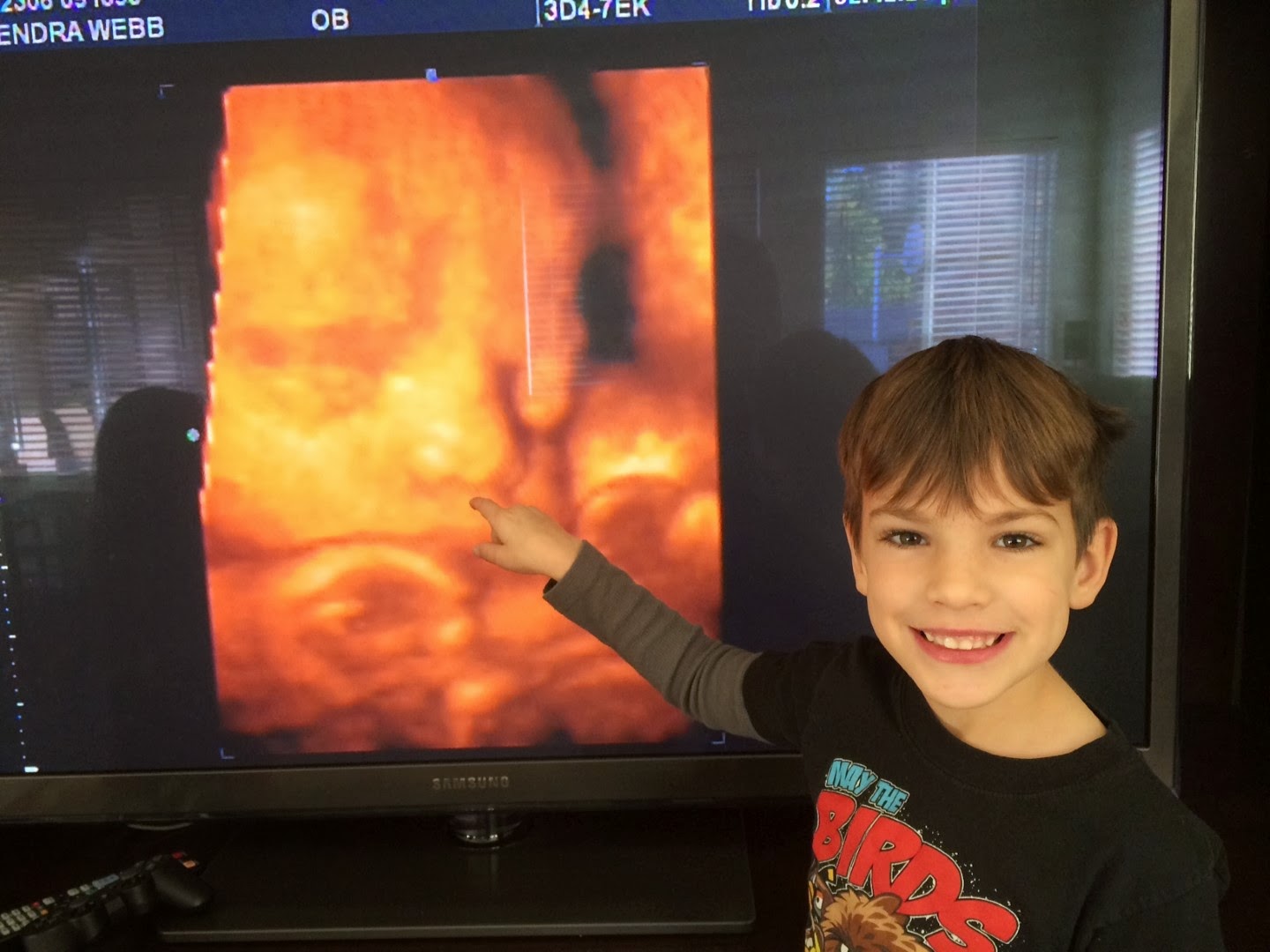 The only color in the ultrasound was the blood flowing through their heart.  They were amazed when they saw the blue and red flow of blood as their heart pumped.  Layla kept asking about each body part, "was my heart OK?  was my brain OK? was my leg OK?"  She was so concerned, but I reassured her every time that she is perfect and healthy and has been since she was growing in Mommy's belly.

I took the twins out for a rock climbing adventure.  The perfect weather shouldn't be wasted inside.  We'll have a whole summer of indoor activities, but right now it is time to make hay while the sun is shining.  We went to the trail where we sometimes hike, but instead of doing a cross-country hike along the trail we diverted off the side of the trail and went straight up the mountain.  The rock climbing was difficult enough that they had to scramble with their hands and feet to make it up the face of some huge boulders.

As we explored Easton noticed a car-sized cavern formed within some rocks.  They asked to climb inside so I gave my typical response of, "why not?"


They were a little overly confident in their ability to climb the big rocks, but I gave them guidance and boundaries.  Both of them said this was the best hike ever.  We jumped across some small gaps between the boulders and their balance was sufficient to avoid injury.  I consider this to be a successful outing. 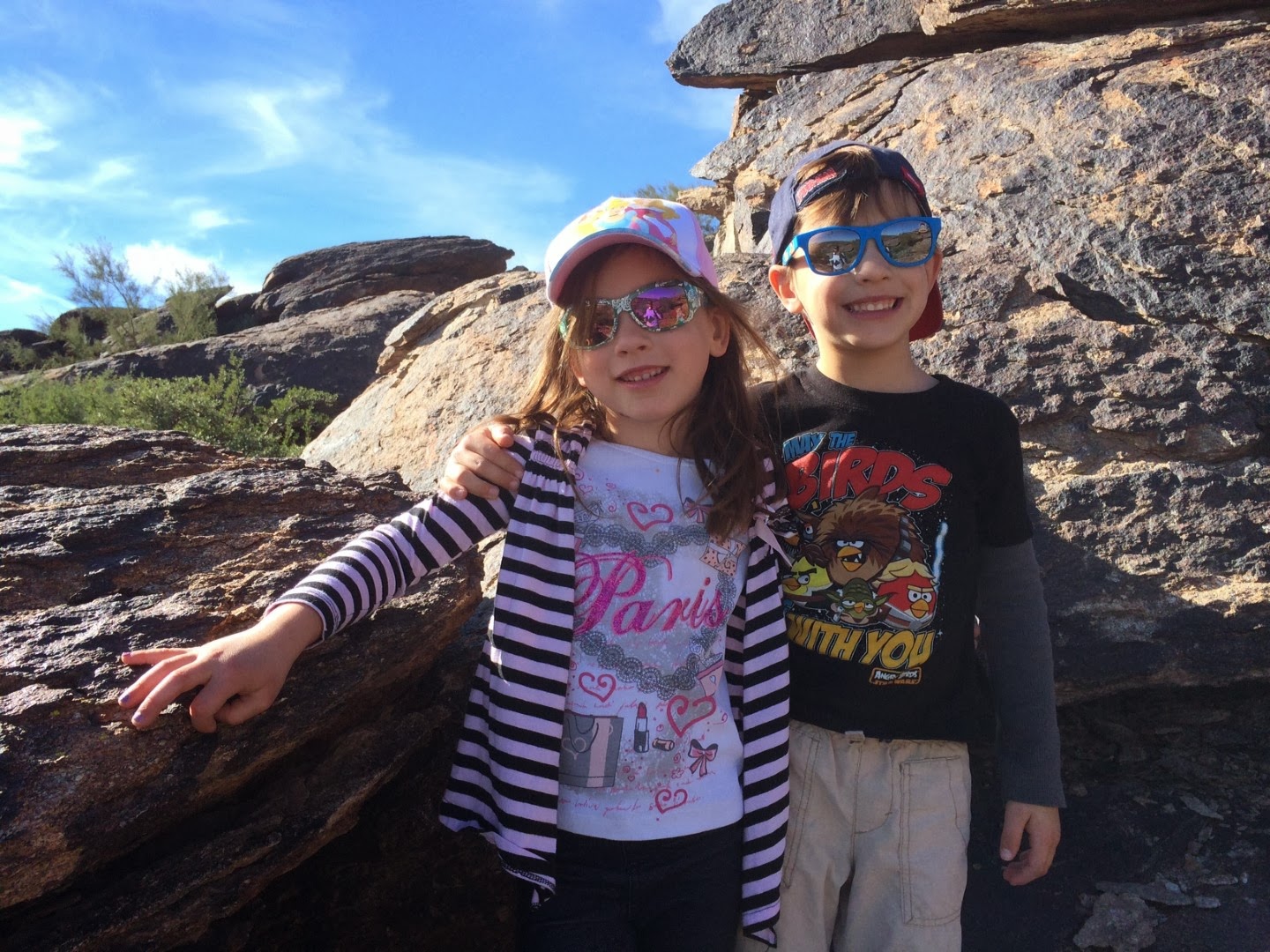 On the trail they stopped to play in the sand.  Some parents and the earlier version of myself may have scolded them or disciplined them for picking up big hand-fulls of sand and letting it sift through their fingers.  I'm a lot more relaxed these days.  I stopped short of encouraging them to eat it.  They are kids and we live in the desert.  no biggie... 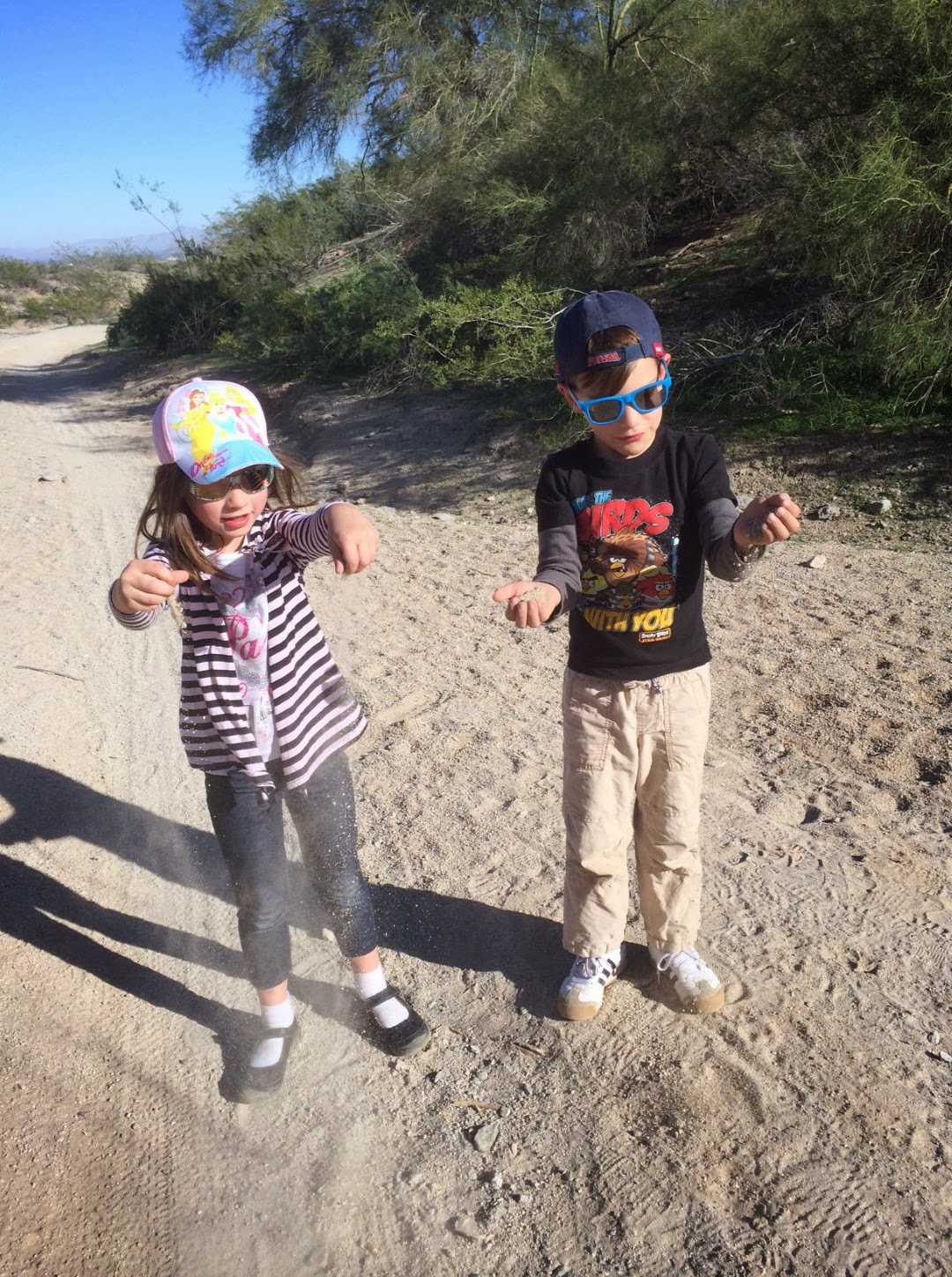 I took off work Friday afternoon to hang out with Easton.  He and I attended his school-mate's birthday party at Peter Piper Pizza.  The gaggle of six-year-old boys ran chaotically around the facility playing chase.  No tokens necessary.  Of course it eventually went that route though.  This is Easton with the birthday boy, Aiden.  He gave him a lego jet airplane as a gift, which put him in good company with the other kids. 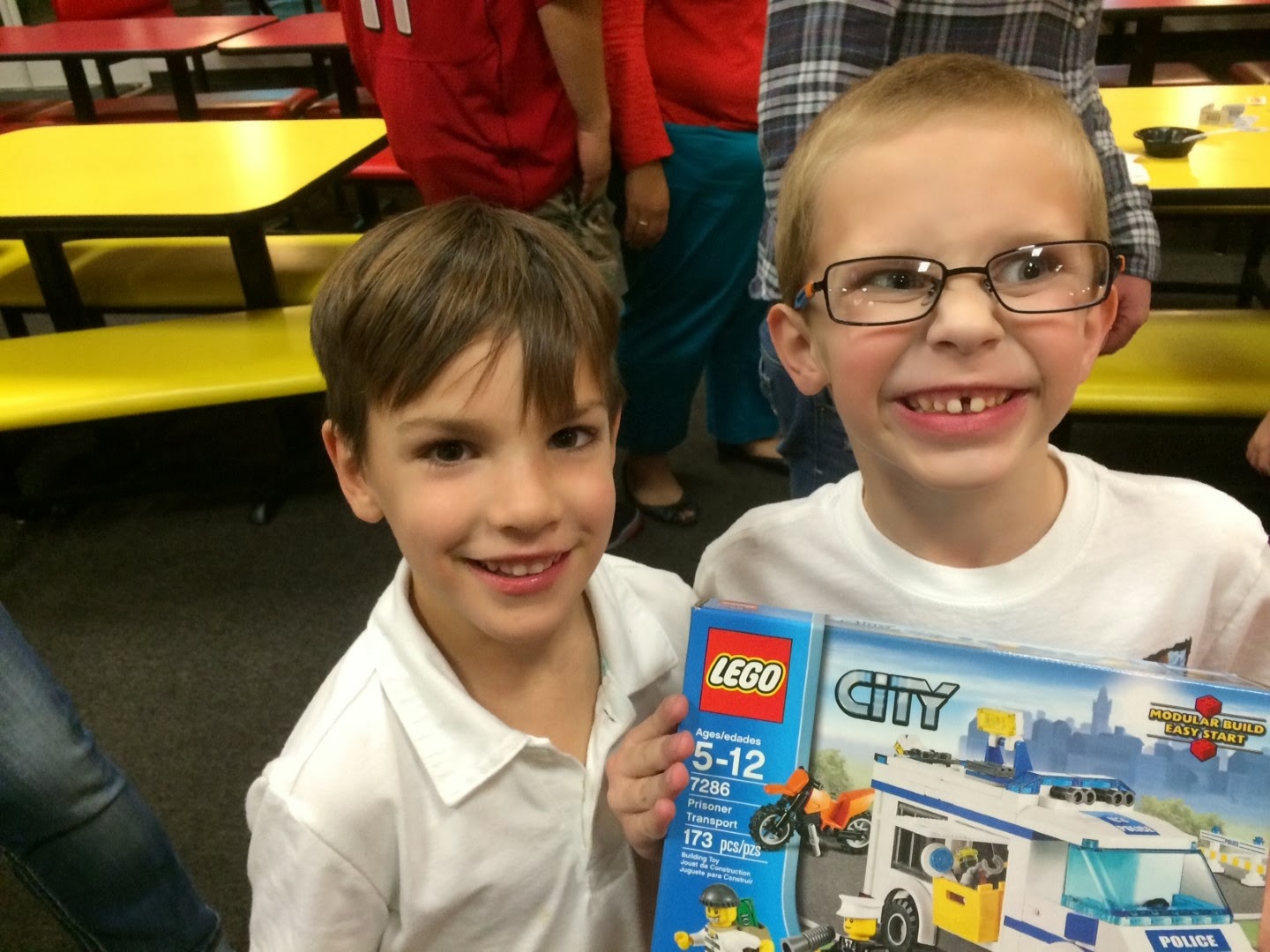 I had a flashback and could not believe how much things are the same today as they were when I was 6.  Legos, Star Wars, and Matchbox were the three most common discussion topics and birthday gifts.  same as when I was 6...

The cake was delicious though.  the parents throwing the party were cool enough to order plenty of pizza and bring a huge cake to include the adults. 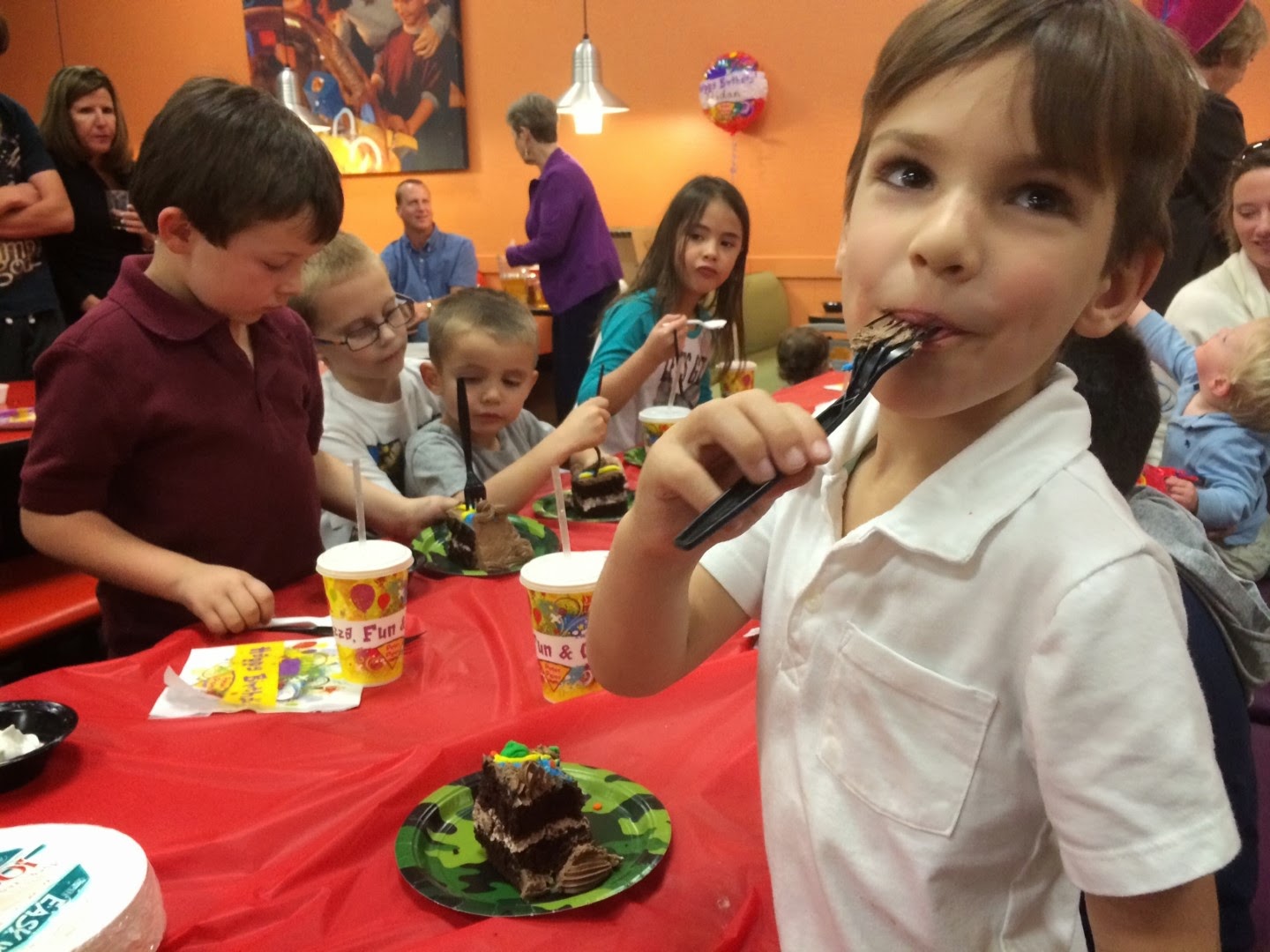 Before the party Easton had his first official golf lesson.  Oupa's instructional times were much more beneficial, but Easton had a great time at this place.  Big-kid lessons don't start until 7 years old, but for age 4-6 they have a 1-hour group lesson, once per month, for $5.  It was worth the trip.  The kids were split into groups of 5 and an instructor guided them through 4 holes that were 30-yards long each.  The clubs had huge plastic heads and the ball is essentially a tennis ball.

Easton's form went out the window because of the distracting new friends around who were even less disciplined than Easton when it comes to golf etiquette. 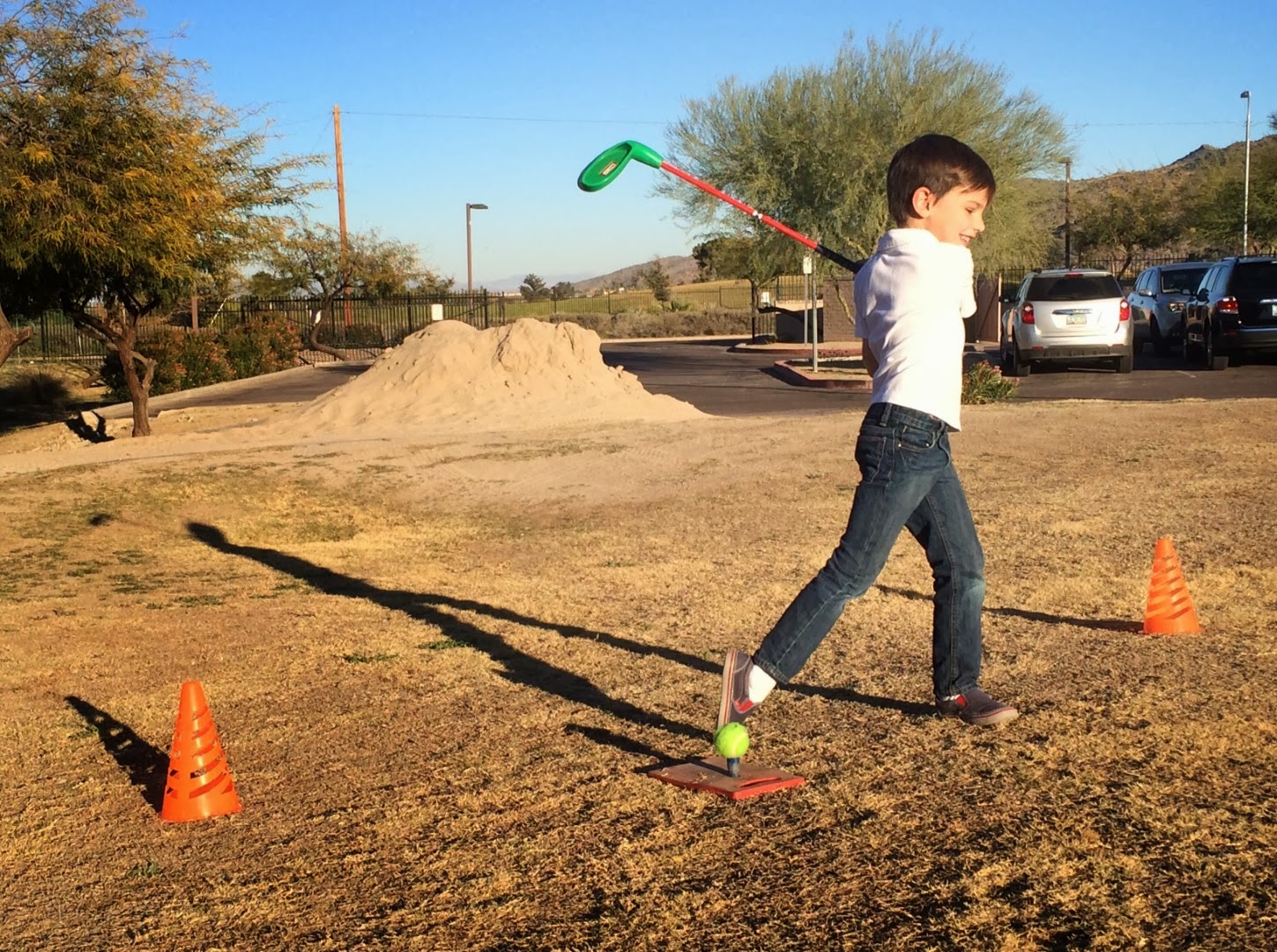 He did really well with hitting the ball in spite of the chaos.  Occasionally I would look away or check my phone while sitting in the pile of parents.  Easton was quick to call me out and say, "are you watching, Dad?"  I cheered him on consistently while the other parents sat silent.  Once in a while one would smile at me or get frightened as I blurt out encouraging words for Big Time. 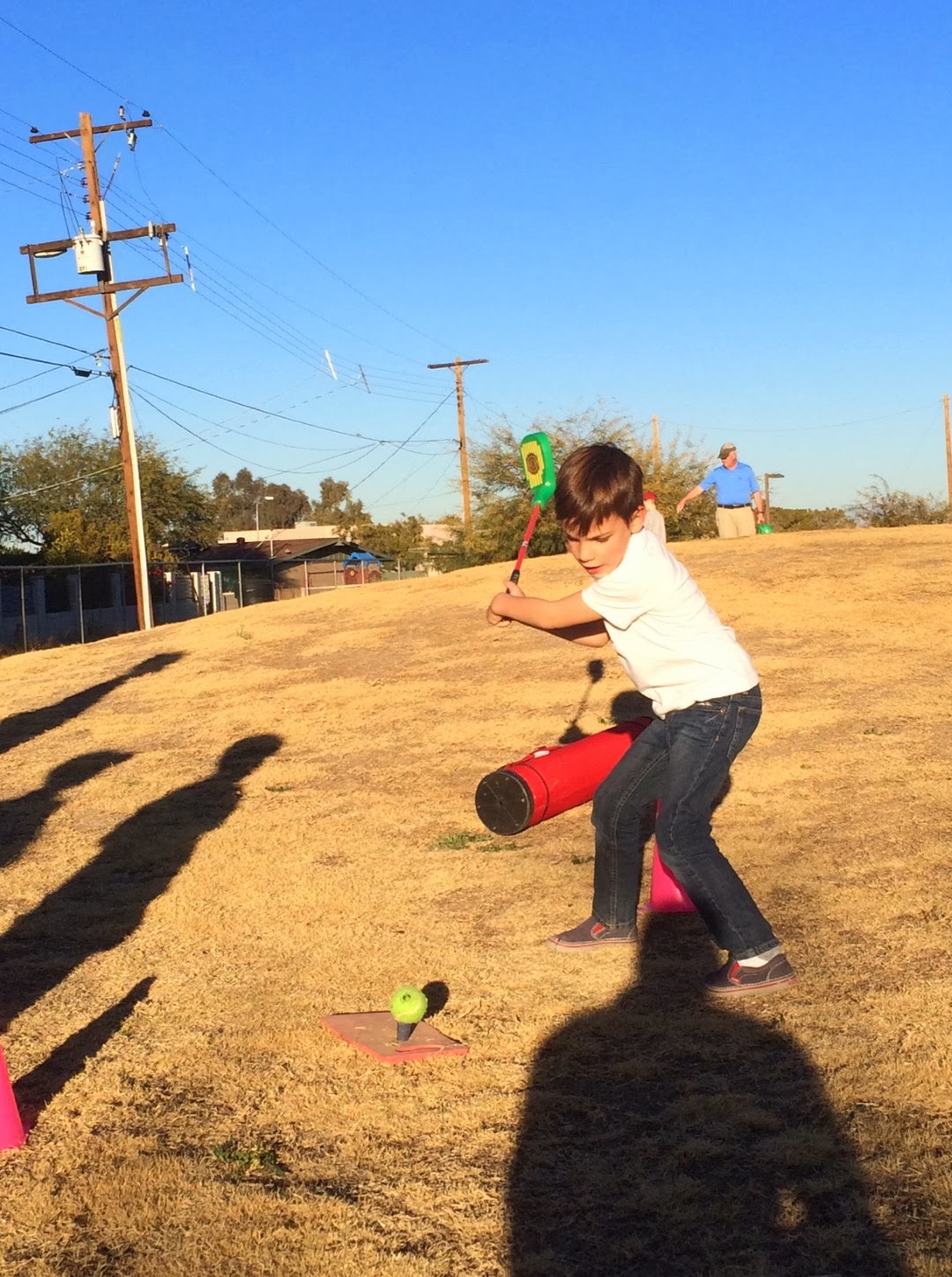 The main coach is willing to give Easton private lessons for $20 an hour.  We might do a few of these next month if Easton's interest continues.  For now he is happy to play around while playing "a round" of golf with his new-found friends. 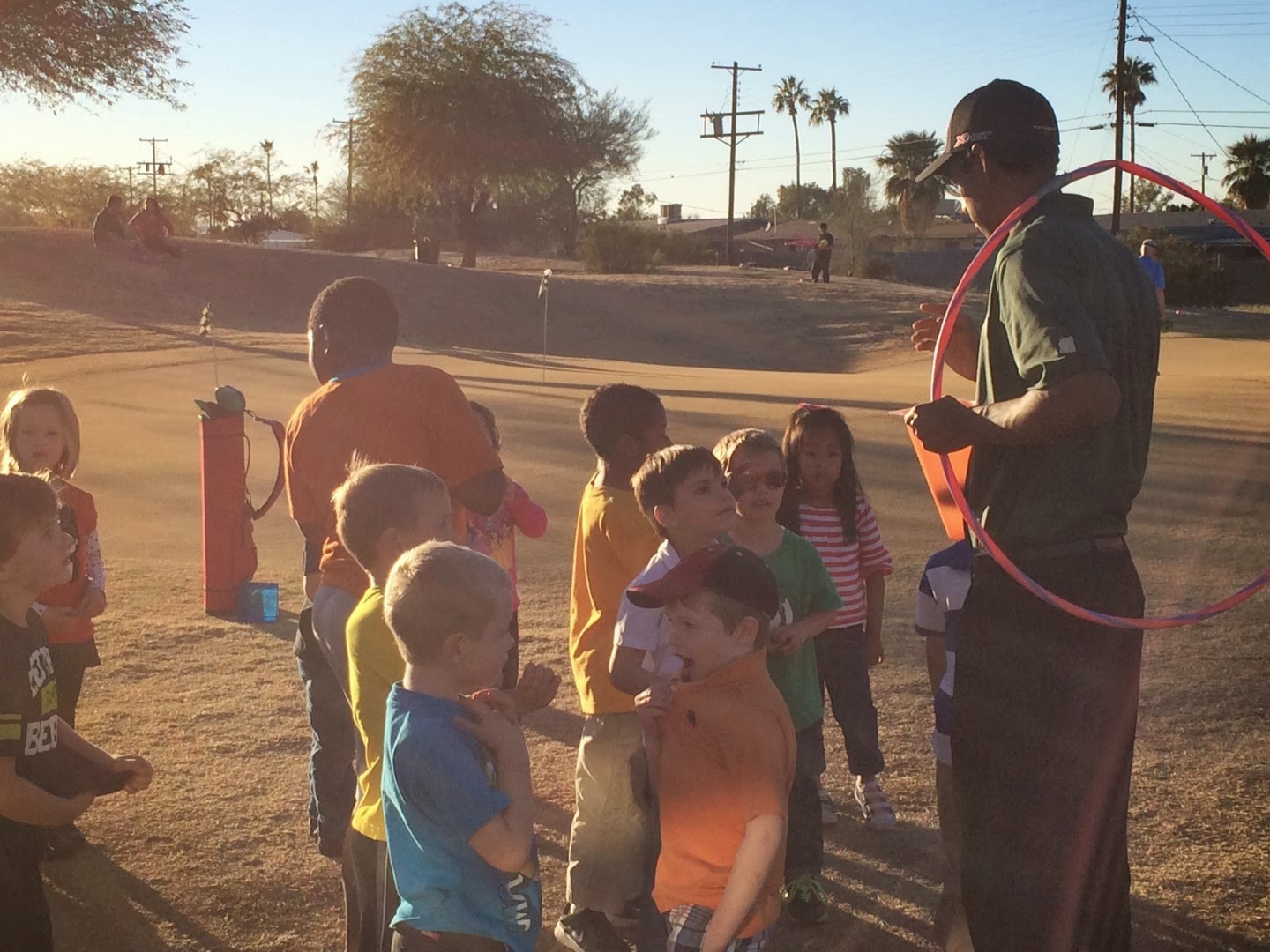 Layla and I didn't have any one-on-one time this weekend.  Even so, we shared several hours together with family time.  The thing she was most excited to tell me after school on Friday was that she earned an A+ on her first spelling bee quiz.  stars and smiles all the way around. 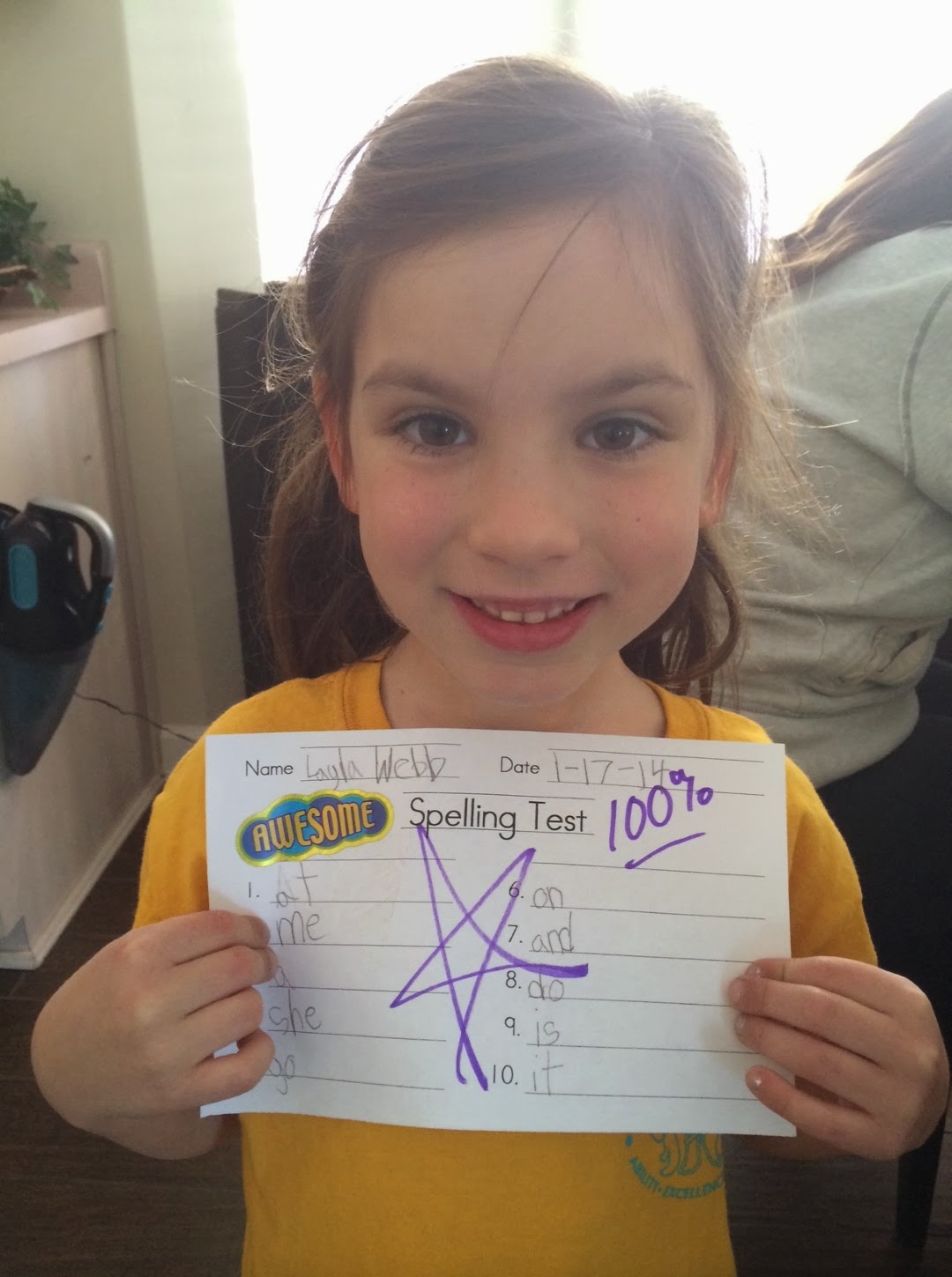 We are in our second week of listening to the Suzuki piano CD every day.  Layla is still interested enough to want lessons.  Easton asks when we can turn it off.  :)  So much fun having such different personalities and gifts for these two.