I've been working on this post for a few weeks in my mind and finally unraveled enough to share.  On July 28th, 2013 my role as a father was partially fulfilled.  That is the day Easton invited Jesus into his heart.  Layla already did this a few months ago.  I had the privilege of leading both of them through the prayer to allow God to live in them and through them from now to eternity.  I've been waiting patiently since the day they were born for them to ask me, without any prompting, to do this.

During our bedtime routine when I sing to them and say goodnight Easton and I were talking about something when he randomly asked me about how to ask Jesus into his heart.  The glow of his nightlight was not enough to capture a video, but I did get the audio of how that conversation went.

Do you get that?  Do you know how much happiness I have as a father knowing my kids will spend eternity with the God who built the universe?  I now have assurance me and my family will have a place in eternity when this temporary life is over.  There is nothing I could own or experience or accomplish that will ever compare to leading Easton and Layla through a prayer to invite Jesus into their lives.

"What is your life like? For you are a puff of smoke that appears for a short time and then vanishes."  If I honestly believes this Bible verse is true, then what happens after this life is infinitely more important than what happens during this life.  My goal and function as the spiritual leader of the 4 Webbs is to make sure Kendra and the twins make it to heaven.  Yes, the trash still needs to be taken out, but that's not where my focus is.  Life is just what happens as we prepare for eternity.  I see and treat Easton and Layla as eternal beings, not just kids.

Back in May of 2008 when the twins were 12 weeks old we stood on the stage of our church to dedicate the twins.  what this means is we gave them to God.  They are His kids.  Their needs are His needs.  Their problems are His problems.  Their blessings are from Him.  We, as parents, are just the hands and feet to grow Easton and Layla so they can become everything God intends.

This changed everything.  Instead of us being the beginning and end of everything relating to the twins we are simply stewards of what is Gods.  Just like the money we make and house we live in, everything belongs to Him.  There is freedom in parenting this way.  I tell them at least once a week they are a gift from God for Mommy and Daddy.  They see themselves as a valuable treasure that we prayed and believed God would give us.  God never made any promises to us, but thanks to modern science and good health insurance we were literally given (almost no cost) these two special gifts. 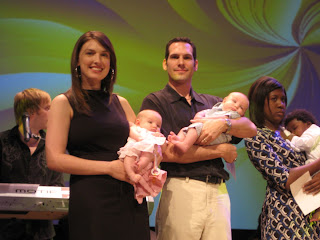 When a child sees themselves as a treasured gift, then they also get purpose, confidence, self-esteem, worth, and many other good character traits that all kids should have.

During the baby dedication, we made declarations or promises as Pastor Phil commissioned us.  He said something like, "and do you promise to be Godly examples to Easton and Layla so that when they get to the age of accountability they will accept Jesus into their lives?"  We answered, "we do" in front of the entire congregation, Pastor Phil, and God.  That's a tall order considering how much influence the world has in shaping the minds and hearts of children.

The good news is that we did (and will continue to do) what we promised, which is to live our lives in such a way that Easton and Layla are attracted to God and see Him and His power through us.  I'm grateful for our Pastor who has poured God's Word and truth into our lives since before the twins were even born. 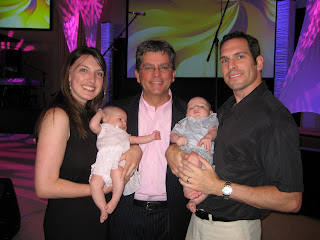 Many things we teach Easton and Layla go directly against today's culture.  However, my job as a parent is not to make the twins "fit in" with society or be the coolest kids at school.  I want them to stand up and stand out and stand for what is right.  If we don't teach them who they are and build their identity then the world will tell them.  I don't want the world telling my kids who they are because it is superficial and downright mean out there.  My goal is not to protect them from the world outside the Webb house.  My goal is to prepare them for the world outside the Webb house.  One of the best ways to do this is to teach them right and wrong while loving them so fully they overflow to the people around them.

I just read your posting about praying with Easton. How awesome that is! I really enjoyed my time with you all and love you so much! You and Kendra are perfect hosts! Can't wait to see you later--skype or otherwise. Love ya gobs. MOM