Happy Monday!  The 4 Webbs are through the three-day weekend and off to a fresh start.  Last week Layla said, "Dad, I'm bored at school.  We're just learning letters and stuff I already know."  I assured her the special (gifted) classes she starts soon will challenge her and teach new things.  She has a hard time understanding how the rest of the kindergartners aren't as smart as her even though I prepared her since before school started by encouraging her to have grace and patience for other kids.

Layla made the big shift in reading this past week.  I've been reading to her since the first week she developed ears in Mommy's belly (around week 12 of baby development).  9 out of 10 days for over 6 years I read to her.  This past week she read to me.  Her first book?  Hop on Pop by Dr. Seuss.  Go figure...  She does a lot from memory instead of reading each word, but she knows how to read every single word including palm tree. 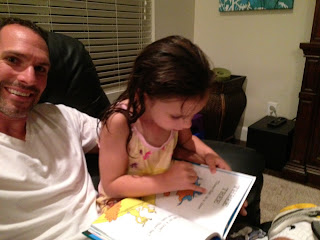 Easton is not interested in reading to me because the books he likes are high school level Earth science books.  He asked me to explain why the water "goes away" (recedes) just before a tsunami.  Luckily, his Extreme Weather book has a detailed explanation.  By the way, tsunami is one of his many sight words he recognizes, but can't spell yet.

The weather briefly cooled down for a couple of days like it does every year.  It's as if mother nature teases us with some relief and then turns up the heater extra hot again while she laughs.  We've been through this enough to know we should take full advantage of it.  Make hay while the sun shines.  We aired up the lifeless tires on everyone's bike and took a long ride through our neighborhood.  Safety first! 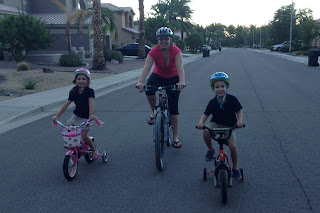 I'm working to get their bikes swapped out for big boy and big girl bikes, which have 16 inch wheels and no training wheels.  By swapped out I mean sell the old ones on Craigslist and buy used ones from Craigslist.  Shouldn't cost more than a few dollars to "upgrade" if I can find the right deals.  We'll see...  cooler weather is just around the corner.

Saturday was Easton and Layla's first soccer game!  Layla is the only girl in the league, but she holds her own and doesn't mind at all.  Each team has 5-6 kids with 4 on the field at a time.  There is no goalie and the net is really small.  Before the game we had a short practice to show how to throw the ball in.  Coach Kendra had the team fired up and ready for game time. 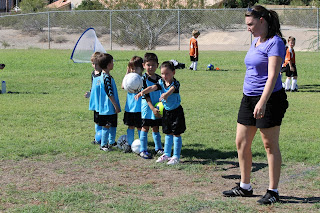 Easton is a stickler for following the rules and his form of playing soccer has his personality on full display. 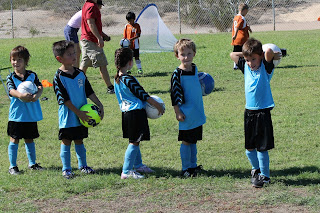 Layla's hair in a braid helped her blend in well with the boys, but the real reason for her hair being up is because the game time was obscenely hot and sunny so she needed to stay cool.  She is sporty and strong, for sure. 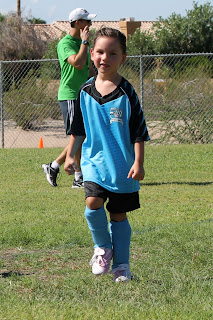 Layla is #4 and Easton is #5.  They played well together on the field and also separate as each one sat out a quarter to cool off and let everyone rotate in. 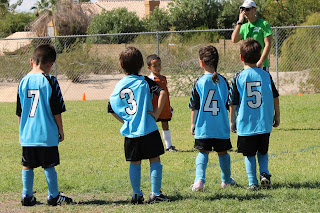 The other team obliterated us.  I think the final score was 7-0, but I lost count after Layla stopped caring.  She was distraught each time the other team scored so we had several teachable moments to get her to understand it's not about the other team or what they do.  It's about us and what we do.  Easton could care less about the score.  He was having a blast chasing the ball around the getting roughed up with the other boys. 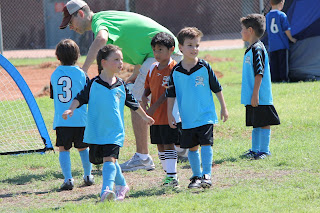 Layla was right in the mix getting position, kicking the ball, and learning the rules of the game.  Look at that girl go! 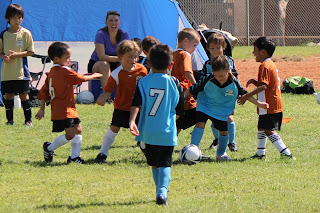 The team consistently played "bunch ball" where every player stands within 5 feet of the ball and both teams follow the ball around.  No one was getting open.  No one passed. No communication.  Just a big cloud of dust pushing the ball around.  It was humorous and entertaining. 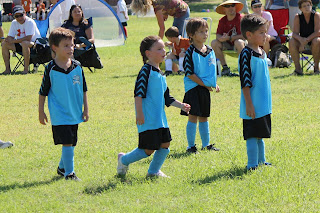 The 30 minute-long game was a good start to the kids athletic career.  They realize it's harder than it looks and practice is a requirement for them to improve.  Neither one was discouraged enough to quit.  We wouldn't let them anyway, but their attitude coming off the field was happy as always.  We'll be back to practice tomorrow and back to the field next Saturday for game 2!