Someday the fact that I'm blogging while hurtling through space at 500 mph in my company's corporate jet won't be a big deal, but right now it feels a little futuristic.  20 years ago I couldn't imagine taking a picture with my phone and sending it to another phone across the country.  Now i'm able to take a picture with my phone, send it to my family, and post it to the internet without wires while flying in an airplane.  Just think what life will be like 20 years from now.  That's the world Easton and Layla will grow up in.  I can't explain how wireless cellular networking works to Easton yet because I don't understand it well enough, but I gladly use it just the same.

Speaking of questions from kids, during my bedtime conversations Easton and Layla routinely wait for me to walk away before saying, "what would happen if we didn't have..." and then throw in some random thing.   This is their feeble ploy to keep me in their room just a little longer.  Easton asks this question about gravity, smoke detectors, and flashlights.  usually I take this time to get them to dream of impossible things or as a problem solving exercise to get their creative juices flowing.  However, the other night Layla said, "What would happen if we didn't have...  love."  So many answers came to mind, but I quickly categorized the possibilities and zeroed in the best one.

I said, "God loves you more than Daddy ever could.  do you know how that's possible?  Because God doesn't just show love or do love, He IS love.  God existed before the Earth did and he is real now and he will be here long after the Earth is gone.  There will be times where people act in a way that doesn't show love, but You don't have to ever consider what life would be like without love because God is our source and He will be in your heart for the rest of your life."

When I walked out the door with my standard departure of, "I love you, my beautiful princess" she responded with, "I know, Dad."  Her confident response is one of the ways I assess how well i'm doing as a father.  She'll always need the three A's (attention, affection, affirmation), but sometimes it's difficult as a father to know if I'm meeting those needs.  As I walked down the hall after Layla's response I did a little happy dance with a big smile because I get enormous satisfaction from knowing her love bank is full enough to believe she is loved.

Saturday mornings are full of soccer for the next...  13 years or so.  This Saturday was special because they each scored a goal during their soccer game.  As a 38 year old guy there aren't many "firsts" for me on any given day or week.  However, the twins frequently experience first (whatever) often. For example, first airplane trip, first day of school, first bike ride with Dad, etc.  This day of their first goal scored was one of those experiences I'll never forget.  Seeing their joyful reaction to success, team work, and pride of doing their best was priceless.

I found out Layla is the only girl in whole league!  Kendra and I still believe it was a good decision to do this instead of putting her in the girls league.  Anyway, she was in fine form during the pre-game practice. 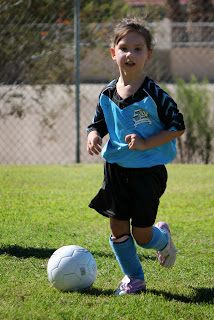 The rested in the shade before starting because it was already hot and sweaty. 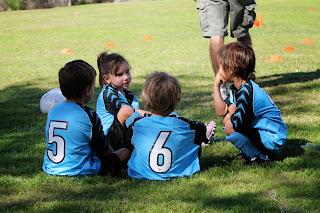 Kendra is technically the assistant coach, but the head coach turned over this game to Kendra because he had to take care of his other two kids on the sidelines while his son played on our team.  Kendra did a great job of representing the green shirt and whistle, which are the symbols of authority on the soccer fields. 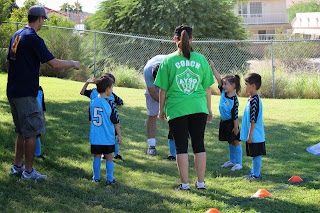 Easton and Layla didn't practice much since last game, but I could see improvements in their game. 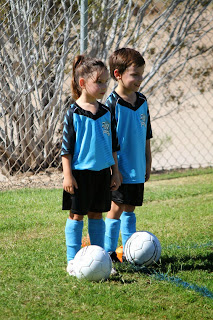 Layla sat on the sidelines while Easton played.  I overheard her say, "Do you guys know what leadership is?" then she proceeded to explain it to them. 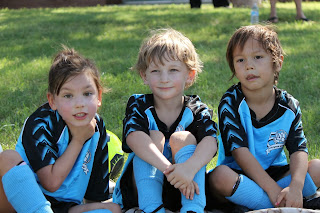 After the game we reviewed the pictures at home.  As I scrolled through them I zoomed in on a random picture and said, "Layla, did you stick your tongue out at that boy?"  she frowned and said, "yes... but he pushed me!  We had a brief teaching about sportsmanship as I held in my giggles. 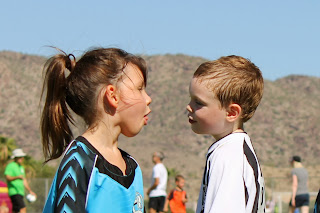 The boys are already chasing Layla and I'm sure they will from now until the day she's married.  This is the appropriate way I like to see boys chasing her for now though... 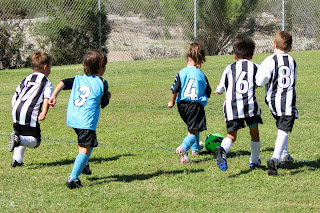 i would not like to be across the line from this determined little fireball of a soccer player.  Here's her look of determination after a goal was scored against our team. 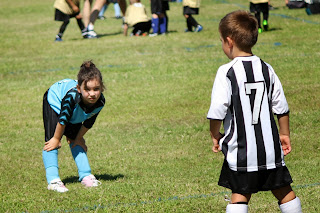 Kendra gave a good half-time pep talk for the team.  We broke up the game into quarters to allow for substitutions and an additional break so that's why i call it halftime. 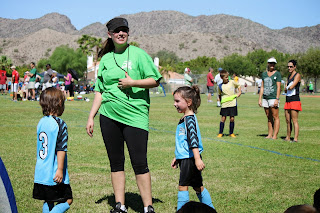 I didn't capture video of Layla scoring her goal, but this is immediately afterwards.  How about that for expressing elation!  Her goal came at the last few seconds of the game.  As soon as the whistle blew she ran over to me.  I gave her a big hug and she started to cry.  She said, "I'm crying because I'm so happy about scoring a goal!"  I held her close and shed some tears of my own as I told her how proud I am of her achievement.  One of the many moments I'll never forget. 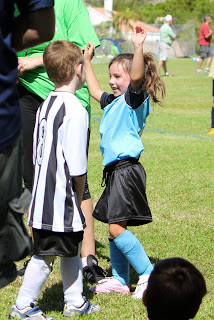 Easton and Layla each scored a goal, but no one else on our team did.  the final score of 2-3 implies a loss, but you'd never know it by watching the twins after the game was over.  They happily congratulated the other team with good sportsmanship. 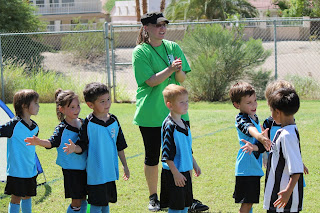 Easton scored his goal on a break-away where there was no one between him and the goal. He dribbled like a champ and kicked it straight into the net.  It took a few seconds of everyone else cheering for him to realize what he just accomplished, but once he "got it" he was jumping and screaming as if he won the lottery.  it happened so fast I didn't even get a picture much less a video of the epic event.  His confidence grew two sizes this day. 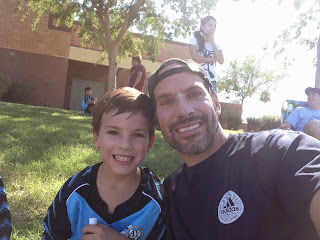 You'd never know the game added a loss to our team's record by the smiles and congratulations shared by everyone on the team and within our family.  This is the way sports are supposed to be played at the kindergarten level. 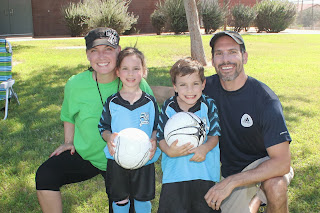 After the game we have healthy snacks and lots of water to re-hydrate.  The muffled comments recounting the game's highlights are a result of mouth-fulls of food and excited players. 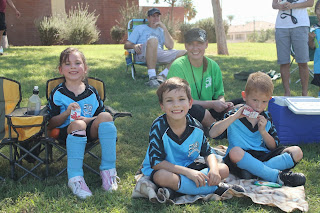 Later that day we went out to share a celebratory ice cream.  their mouths were so full of chocolate peanut butter it was hard to smile, but trust me they were still on a goal-scoring joy-ride. As Easton and Layla look back on their accomplishments (however small they were) I want them to have memories and pictures of how we, as parents, affirmed them through their victories.  there is so much more involved than just simply "being" in attendance.  In the same way that showing up to work doesn't make me a manager, showing up to their soccer game doesn't make me a Dad.  It's the active participation, involvement, and encouragement that makes me a manager and a Dad.  There are no points for attendance.  I don't have all the answers to life, but based on my experience this is what makes the difference. 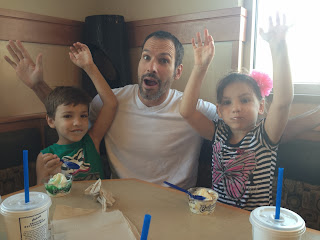 On Friday night Kendra and I went on a double date with our friends Chad and Andrea.  We quickly get back to enjoying the simple things in life when we are kid-less.  As we slowly walked along the sidewalk towards the restaurant holding hands we pointed out how much we enjoy each other in these simple moments. 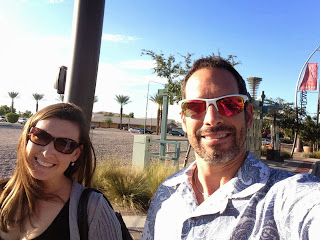 As much as I love Easton and Layla, I love Kendra more and I enjoy spending time with her more as we grow closer together.  I won tickets to see a private (company sponsored) acoustic concert with Brian Vander Ark, former lead singer of a group called The Verve Pipe.  I didnt know what to expect, but it turned out to be a great concert.  He sang a few kids songs, which were funny, as well as moving ones such as Daddy's Girl, which is about a father giving his daughter away in marriage.  Totally not ready for that one, but it was a great song. 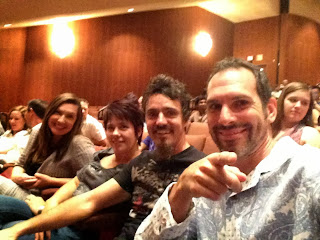 I'm amazed by how fulfilling and fun it is to be with the twins and how joyous it is to be with just Kendra without the kids.  Sounds like a paradox, but it's not.  Our life is very blessed and I'm grateful for the opportunity to live such a fulfilling life on both ends of the spectrum.