The time has finally come to teach finance 101 to Easton and Layla.  The lesson today put them ahead of probably 95% of all people in the world... including adults.

They both have a piggy bank in their room.  Easton's is a fire truck he painted and Layla's is a pink elephant given as a gift.  Since they were about two years old and could hold a coin we've excitedly encouraged them to put the coins in the bank.  When they find a coin around the house or at the Wal-mart parking lot they instinctively put it in my pocket and then at the earliest convenience I take down their piggy bank and let them place in in slot.

Today I expanded their horizon at an astronomical level.  First, we emptied the coins out of the bank into a ziplock baggy.  Their expressions as the money came pouring out into the baggy were priceless. 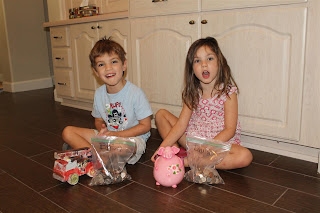 I jumped in on the action as well with my change bucket.  We've been emptying change into this thing for years and I wanted to turn it into dollars so we can add it to our Disneyland trip fund. 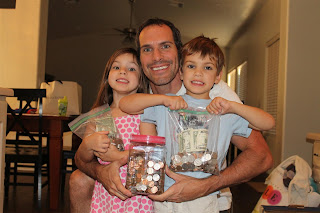 Then I put three cups in front of each of them and labeled the cups: 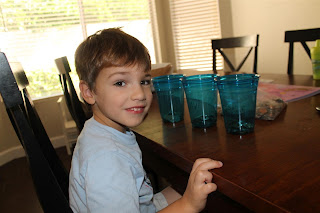 Easton and Layla sorted the entire contents of their bag into three cups by placing a coin in each cup.  They repeated over and over, "give, save, spend...  give, save, spend."  I felt like Mr. Miyagi yelling, "Up!  Down!  UP!  DOWN!" as I chanted along with them.

Mr. inquisitive jumped in right on cue with his questions of why we can't just put all the money in the spend cup and why we have to save before we spend.  Talk about teachable moments.  Easton practically throws me a softball every time.

Layla picked up the pattern within 5 seconds and she was off to the races sorting and learning. 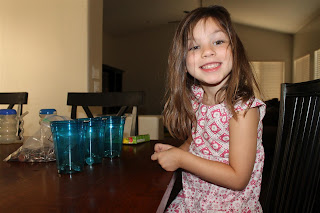 The exercise of sorting the money was strictly for the purpose of helping them understand the order of finances.  We loaded all the money into baggies and headed to the closest Coinstar location.  Once inside I let each one dump their money into the coin collector and then retrieve the voucher certificate.  The customer service person gave them the cash in large bills totaling about $40 each!

The grocery store bank was kind enough to break the large bills so they had a stack of 40 $1 bills to take home.  We went home for dinner and step #2 of the process.  I had each of them count out the $1 bills again into three piles.  "Give Save Spend", they chanted again.  The spend pile ended up with $13 in it.  They were speechless when I said, "Let's go SPEND your money at the toy store!"

On the way there we had an open discussion about what to buy and I convinced them they didn't have to spend every one of the dollars.  We walked into the Dollar Store and I loved watching their eyes light up as they slowly headed towards the toy isle.  Their entire concept of money and spending and toys was just blown up with dynamite.  They felt so empowered.  Easton kept asking, "Dad, what should I buy?"  I put the responsibility back on him by convincing him it is entirely up to him what he buys and how much.  He grabbed a motorcycle hotwheels toy and then said, "I want this, but can I also get the airplane?"  I wasn't sure how far they would go, but didn't care if they spent the entire $13.  They ended up getting three items each.

We approached the cashier where they placed their items on the conveyor belt.  Easton opened his baggy of money and handed the guy three dollars.  His smile was worth a million.  Layla's whole concept of buying toys was turned on its head.  The toy isle became the most incredible wonderland of items on the planet.  She said (and I quote), "This was the best day ever!  Thank you, thank you, THANK YOU!"  I said, "You're welcome, but the money you spent was the money YOU saved.

The joys have only just begun because they are going to start earning dimes every day based on their ability to complete chores and tasks around the house.  Here's the foundation of my finance lessons and work expectations: "But let every man prove his own work, and then shall he have rejoicing in himself alone, and not in another." Galatians 6:4

If only the rest of America would get these basics (with the correct order) we would be much better off economically.  Give, then save, then spend.  Doesn't get any easier than that.